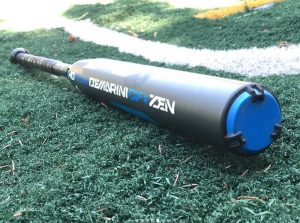 Our hitters loved the DeMarini CF with each of them ranking it in their top 3 bats. It swings light, has a good sized barrel and feels great on hits and mishits alike.


We hit the 2019 CF Zen Fastpitch bat in a drop 10 several hundred times with a few different types of hitters. Exit speed, ball distance and the general feedback from hitters was recorded. As well, we spent considerable time discussing the bat with major vendors and reading any early report online reviews we could find. That data is put together in this 2019 CF Zen Fastpitch Review.

As such, the 2019 CF Zen is more for those who prefer or need a light swinging bat. The fact it only comes in a drop 10 and drop 11 for 2019 is proof of that too. If you need more gumption in your barrel then look to the 2019 CF Insane in fastpitch.

A light swinging two piece composite bat in the fastpitch space is epitomized by the CF_ series from DeMarini and the LXT Series from Slugger. Although other brands try and get some love in that space these two bats really dominate that niche in the market. And for good reason. Both bats feel great on hits and mishits, give a sound like the ball is crushed ever time and fit the perfect balance point for most players.

Deciding which bat is better, the CF Zen in fastpitch or the LXT in fastpitch is splitting hairs. The only technical difference, really, is that the LXT swings a bit lighter. Sure, the inside of the LXT uses some ring tech while the CF series is empty. But, practically speaking, both bats are quite good, get amazing ratings, and cost the same.

To put it frankly, there is virtually no difference between the 2018 CFX and the 2019 CF Zen in fastpitch. Both bats have the same 3-fusion end cap, 3 fusion connective piece and use the same Paraflex composite.

This is not a bad thing. The CFX was the most popular bat in the market for the youth and High School crowd. There is no reason to think any changes needed to occur.

We also don’t think DeMarini should get flack for remaking the same bat and calling it the 2019 version. They only produce enough in 2018 for a particular season. The 2019 version, although the same in everything but paint job, restocked shelves and replenished inventory.

The CF Zen fastpitch bat is a two piece composite bat built with a high tech connection point. The connection point removes most of the vibration on mishits as to not effect the hands. This works both in theory and in practice as we’ve hit with DeMarini’s two piece bats for years now. DeMarini’s connection pieces are top shelf stuff.

The barrel is built to a 2 1/4 standard legal for play in every league (ISA, USSSA, NSA, etc). DeMarini has used the Paraflex composite in their baseball and fastpitch bat lines for quite a while.

My granddaughters cf zen does not make any sound when she hits. Does that seem normal?

I just got this bat and when I make contact, my hands sting really bad. It doesn’t feel normal

Yes. It’s composite so yes. Most like the idea of it working in naturally. Takes about 200 hits or so around the barrel. We usually don’t bother with it since it will get worked in soon enough.

Sprite? Not sure what you are referring to here. Care to clarify?