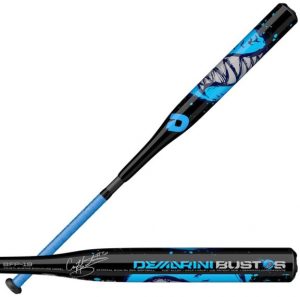 Our smaller hitters loved the ultra light swing weight and the smooth smash crated by the two piece design. It is hot out of the wrapper, doesn’t require any break in and delivers pop to be useful to the serious, albeit small, fastpitch player. More on this bat in our 2019 DeMarini Bustos Fastpitch Review.


One of our favorite bats for an entry level fastpitch player is the 2019 DeMarini Bustos in a drop 13.

In so many ways the Drop 13 DeMarini Bustos Fastpitch bat is the perfect fit for the entry level fastpitch player. A drop 13 swings remarkably light–and with a 2 1/4 barrel you can expect as much bat speed as you can muster. This serves the smaller player well enough. The two piece design helps for hand sting and, in theory at least, increases aggression at the plate.

The only thing similar about the 2018 Proven from Slugger and the DeMarini Bustos is that they both swing light and they price out about the same. For most, either bat will likely do rather well for them. However, do note the single piece composite structure of the Proven will hurt on mishits more than the two piece Bustos. As well, you’ll need to work int he Proven with a few hundred hits to get it working at its top form.

Aside from the paint job, there are no differences between the 2019 and 2017 DeMarini Bustos. Both bats are drop 13s. Each is made of the same DX1 aluminum barrel. Each has a reinforced carbon handle. Both are two piece hybrid bats built for the smaller hitter.

If you can find a less expensive 2017 still with warranty then we suggest you go with that one. Unless, of course, the colorway difference is worth the price delta.

The 2019 Bustos is a two piece hybrid bat. That means the handle of the bat is made from a composite material while the barrel is made from aluminum. High end fastpitch bats are often made in the two piece design, but most of the high end ones use both a composite barrel and composite handle. (See the rare exception here).