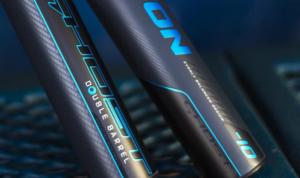 Released to the public in the middle of June 2017, the idea behind the Ghost garners some much commentary from us. We will start this page and add to it as more real user feedback is gained.


The Blue and Black Easton Ghost Fastpitch bat is an ASA approved (girl’s fastpitch) bat. We review that bat, the Easton Ghost ASA bat below. The gold version, which we review here is a USSSA only version.

The Easton Ghost is offered in both a drop 10 and drop 9 bat. The drop 10 is intended for a balanced feel and, by all our measurements, they succeed. The drop 9 is the same bat but with that added once more towards the end cap. This makes the drop 9 2018 Easton Ghost an endloaded bat. We expect more elite players, and those that prefer an endload, to go for the drop 9. The rest of us mere mortals will prefer the drop 10.

It seems obvious to us that Easton is attempting to make a serious run at the market the Sluger XENO has so successfully dominated. Although the Ghost lacks some sizing options the Xeno does not, the Ghost is still most like the Xeno.

You can see our 2017 Louisville Slugger Xeno Review here.

The Easton Ghost will come in a drop 10 and a drop 9. Meaning, if you are under the age of 12 then the Ghost is likely not for you. Drop 10 and Drop 9 fastpitch bats are made for older hitters that like a balanced bat. We are sure, however, there are at least a couple girls under the age of 13 that could swing this bat comfortably. But they would be the exception, not the rule.

​Arguably behind in the fastpitch game in 2017 and previous years, the 2018 ASA Ghost bat from Easton makes serious strides to deliver a top end fastpitch softball bat. By all accounts they have succeeded. Hype would sell this bat as the next big iteration in competition to the XENO, LXT and CFX bats. We, honestly, might be buying that hype. The reasons for that are simple enough:

The idea behind a dual wall bat is to provide a hot out of the wrapper outer barrel that is very pliable but an inside barrel that keeps the bat from exceeding standard performances. This is exactly the design of the Ghost. The outer barrel is remarkably pliable and, by some measures, has the easiest compression in the industry. You can therefore expect both hot out of the wrapper performance with great performance at slower pitch and bat speeds.

Like other premium bats in the fastpitch space, the Ghost prides itself on a super long sweet spot. It looks and feels a lot like the CF series from DeMarini. The ability to make serious and deep contact across the length of the barrel gives is a huge bonus. And, those looking for a serious fastpitch bat will feel right at home.

The barrel is remarkably long. This may go without saying considering we just pointed out how the sweet spot on the Easton Ghost was huge. But, like the CF Slapper from DeMarini, expect an extra long barrel.

In the drop 10, the Easton Ghost is as light as you could hope for. Although it does use a double wall, which often weighs the bat down, the new resin composite does a remarkable job of staying light and pushing the balance point towards the knob. This feature pushes down the swing weight and makes for really great feel.

Easton improved upon their CXN connection in the MAKO to make a more stiff. This is useful especially when the outer barrel is more compressible. The reasoning is that softer barrel does not need any give at contact but, instead, as much power transferred as possible to compress the outer barrel.