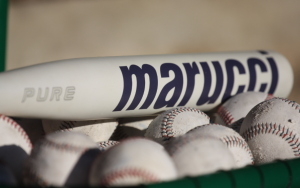 Our 2017 Marucci Pure Fastpitch Review comes on the heels of a few hours cage work, discussions with the manufacturer and reading every user rated review available on the internet. We found, on the whole, the bat performed as well as any performance fastpitch bat we’ve seen in the space. Our players in the 2, 3, 5 and 6 spots in the line up preferred it’s balanced swing and sting dampening to other heavier swinging bats.


We recommend the bat to good and great fastpitch players who need as much performance from their bat as possible. Those willing to try a relatively new bat in the balanced two-piece composite fastpitch space will feel right at home.

We would recommend the 2017 Marucci Pure to hitters who fit in at least one of the categories below:

You have no shortage of bats comparable to the 2017 Marucci Pure. As we mentioned above, every major player in the performance softball space has a two-piece composite fastpitch bat with a focus on a balanced swing and an over-sized barrel. Easton, for example, has the MAKO. DeMarini has the CF9. Louisville Slugger is the XENO and LXT Hyper. Worth makes a 2 Legit. There are likely some others.

We often get dizzy deciphering between them all.

If your hope is to find a performance bat, with their accompanying price tag, in the two-piece composite fastpitch market who has a focus on a large barrel and a light swing the Marucci Pure is 100% on that list.

The Marucci Pure is constructed of two pieces: handle and barrel. Both are composite material. The barrel is as long as they allow in the fastpitch space. It is connected to the handle similar to how the 2017 Marucci CAT Connect does their connection. Which is, the handle screws into the handle. The threaded material making the connection is designed to dissipate vibration between the barrel and handle.

Other companies fuse the two pieces of the bat together somewhat differently with the same intent: minimize hand sting on mishits and encourage a buttery feel on big hits. Our batting cage time confirmed this is true with the Marucci Pure. Their connective design (which they refer to as SDX) does a very good job of producing creamy jacks on dead center hits and dampens vibration on mishits. Better than other performance designs on the market we are not so sure—but as good as anything we’ve tested to date. (And we’ve tested a lot).

Every serious performance bat company playing in the fastpitch space has a two piece composite designed bat as their flagship stick. Some differences are noted in three areas: