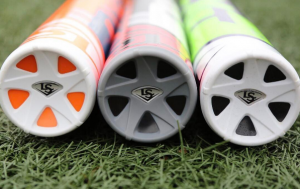 We reviewed a number of sources in putting together this article on the 2017 Louisville Slugger X12 fastpitch bat. For starters, we checked our 2017 DeMarini Vendetta Review and our overall Fastpitch Bat Reviews page. You may also find our XENO and LXT Slugger reviews worth a few minutes of your time.

Off this site, there are a few places to find some insight on the X12. Reviews can be found on Amazon’s product section. As well, justbats.com and Modell’s sporting goods have some insight.


After quality time with Slugger’s X12 fastpitch bat, we have our review and some recommendations. Overall, the Slugger X12 is an entry-level fastpitch bat with an entry-level price. It offers some features top-shelf bats boast, like its two-piece composite design. In other areas, it lacks newer composite structures and does not provide the same type of performance feedback found in real top-shelf bats. We recommend the X12 to the player looking for a value purchase, where top-end performance for top-end pitch speed is not as crucial as a reasonable price and light swing.

As a two-piece composite bat, the X12 maintains the same buttery smash that even the best fastpitch bats in the business maintain. The connective piece technology by Slugger is a legit piece of technology. That said, the bat lacks top-shelf performance along the length of the entire barrel. As well, the offering in only a drop 12 narrows the group of players the bat is recommended for.

With all of that in mind, we recommend the X12 from Slugger to newer and younger fastpitch players who like the idea of a quality brand on an average bat. The light swing weight and butter smash will feel like a top-shelf bat. However, if drives to the gaps and an occasional bomb are the goal, we suggest you look elsewhere for your fastpitch needs.

If you need a slightly heavier option in the drop 12 space, DeMarini makes a drop 12 fastpitch bat called the Vendetta. You can see our full DeMarini Vendetta Review here.

Louisville Slugger’s X12 Fastpitch bat uses a traditional two piece composite design. This design, found on the vast majority of top shelf fastpitch bats, combines a composite handle onto a composite barrel. The two pieces are made separately, then connected with a rubber or synthetic collar.

In theory, this two piece design allows for ball shock to dissipate before it reaches the hands. As such, two piece bats tend to ring the hands less. Depending on the strength of the transition, a two piece composite bat can also bend more on contact. As a general rule, this sting dampening also causes some performance dampening, as possible trampoline effect is negated by a softer landing.