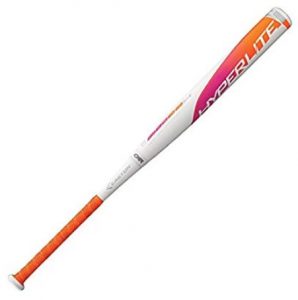 Our hitters, and every review we found online, mentioned how light the bat felt. For some hitters it won’t pack enough punch to be effective. But, if you need as much bat speed as possible the 2017 Easton Hyperlite might be exactly what you’re looking for.


The Easton Hyperlite fastpitch bat is built for the entry level player looking for a legitimate drop 12 bat.

There are a couple drop 12 two piece composite bats in the 2017 fastpitch space. The most expensive of these is the LXT from Louisville Slugger. However, many of those are sold out. The drop 12 2017 becomes an ideal pick up late into the next season.

The bat’s construction is high end. Really. They use the same CXN connection piece on this two piece composite that Easton has used on bats several times their price. In fact, up until 2018, Easton used the CXN on their most expensive Easton MAKO and EAston Ghost line.

The most notable feature on the fastpitch Hyperlite is the drop 12. Not very many bats in the sub $200 space for fastpitch that are both a two piece composite and a drop 12.