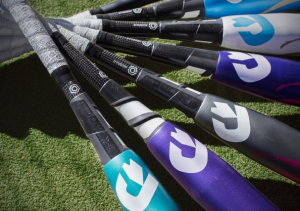 
Our 2017 DeMarini CF9 Insane Review comes from information gathered from time spent with the CF9 Insane fastpitch softball bat, as well as the 2016 version of the same bat (the CF8). Adding that background to the extensive writing and testing we’ve done on other bats in the CF line, we have come to some conclusions.

We would buy the CF9 Insane if we:

Inside the DeMarini line, the CF8 Insane is a near match to the 2017 CF9. If we were shopping for the bat, we’d price check the CF8 for sure.

End loaded two piece composite bats in the faspitch bats aren’t particularly plentiful. However, the Drop 9 XENO Plus from Slugger is likely the most obvious competitor to the CF9. It is a big hitting bat built for the big elite hitter. (Check out our review on the Louisville Slugger XENO Plus).

Like previous years, the CF9 Insane is an endloaded, two piece composite fastpitch bat. The D-Fusion 2.0 handle has a stiff transition, built for the stronger player with top end bat speed. In the CF fastpitch lineup, the bat is the heaviest loaded bat. It is a drop 9. (The drop, you will recall, is the numerical difference between the length of the bat in inches and the weight of the bat in ounces).

DeMarini claims the new composite (they call it paraflex)  is “22% stronger” than in previous years. We would have no way to confirm this claim, but also no reason to doubt it. Considering the balance point on this CF9 Insane didn’t change from the CF8 Insane, we don’t see much value in an upgraded composite. From our research, we did not see any complaints on durability so, again, not sure if the 22% improvement in durability in the composite will be noticeable in the 2017 version.