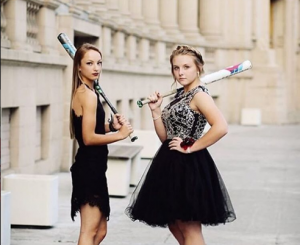 Few bats hold a candle to the CF9 series of DeMarini Fastpitch sticks.


We took several of them for a spin, got feedback directly from elite players, read a number of sources we trust and spoke to the manufacturer and vendor to put together this 2017 DeMarini CF9 Fastpitch Bat Review. We cover the Hope, drop 8, drop 9, drop 10 and drop 11 here. We leave the 2017 Slapper Review and 2017 Insane Reviews to another post.

As a general rule, the heavier the bat runs, the longer it tends to be. This has nothing to do with physics, instead, it has everything to do with the market demand. A hitter looking for a drop 8 is often a big time hitter, and they are never looking for a 29 inch. Hence, the drop 8 is not produced in short sizes. The opposite holds true for why the drop 11 does not come in a 34 inch.

No other brand really drives options like the CF9. In that regard, there are no comparable options. Sure, Slugger’s LXT and XENO lines combined might get you close ,but they would still lack a drop 9 end load. Slugger’s fastpitch line does offer customization options—as they are owned by Wilson, too.

Easton, Marucci, Anderson and Rawlings each make good bats in their own regards. Some, like Rawings’ new Quatro and Marucci’s Pure, use a similar light swiging two piece composite concept, but they lack sizing options and pedigree.

The major, and only, change from 2016 CF8 fastpitch bats to the 2017 CF9 Fastpitch bats, is the change to a stronger composite. The claim is, this new Paraflex composite is 22% stronger. In theory, a stronger composite wall allows for a longer sweet spot, because walls can be thinner for longer without sacrificing durability. Time will tell if the CF9 is much hotter than the CF8, which were arguably the hottest bats on the market.

Our gut feel, after using the bats and speaking to others who have—the CF9 will have similar outstanding performance reviews as the CF8. Good news for all.