2015 Easton FS1 Fastpitch Review | The Last of a Legacy 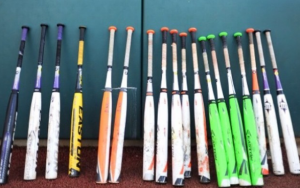 We have seen, hit, and discussed with those who have hit with the 2015 Easton FS1 fastpitch bat at least 500 times. As well, we have read several reviews on the 2015 FS1 and exchanged emails with the manufacturer and vendors to discuss their take on the bat. All those data points have gone into our 2015 Easton FS1 Fastpitch Review.


The bat most like the 2015 Easton FS1 is the 2014 Easton FS1. Aside from the color up, not much has changed between the two, in part, we’d guess, due to the focus Easton is now putting on the MAKO lines of fastpitch bats. This Easton FS1 for 2015 will be the last in the FS1 series which started in 2012.

Outside the Easton brand, similar two piece composite bats in the light swinging big barrel space are the CF series from DeMarini and the XENO and LXT lines from Louisville Slugger.

On the whole, the FS1 from 2015 is a highly recommendable fastpitch bat. Especially for those hitters who like a light swinging balanced stick the 2015 FS1 is right at home. In terms of player feedback and barrel size, the 2015 FS1 defines top shelf performance. As well, those who prefer their mishit vibrations absorbed into the bat’s connective piece, instead of their hands, will prefer the 2015 FS1. The barrel size is remarkable. We’d recommend the 2015 FS1 to serious players looking for lots of barrel and a light swing. Do note however, in marketing hype terms, the bat is ‘old’.

The 2015 model is the first year the FS1 from Easton comes in a drop 11. Previous years, it was released only in a drop 10 while the FX1 was in a drop 9. The drop 11 is obviously a lighter version than the drop 10, which will be the more common version.

Those looking for a heavier drop (like a 9 or 8) and want to stay in the realm of Easton will need to look for the MAKO Fastpitch. Outside of those parameters and you should check our best fastpitch bat article.

Like last year’s FS1, the 2015 FS1 is a two piece composite made from a design Easton refers to as IMX. They used this composite structure in all the Power Brigade lines in both baseball and softball leading up to this final iteration. The composite lends for an extra long barrel and a remarkably light swing.

The FS1 is also a light swinging bat. The balance point of the bat is as close to the hands as is allowable giving it a low MOI (or swing weight). The drop 11 is obviously lighter swinging per barrel size than the drop 10.

The bat continues to use the CXN connective piece which Easton has used for several years in both the baseball and fastpitch softball space.