2014 Easton FS1 Fastpitch Review | Blast from the Past 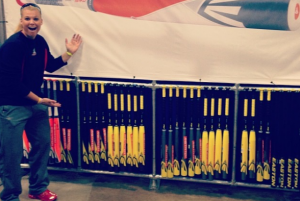 If you can find a 2014 Easton FS1 still in good shape we wouldn’t hesitate to recommend it for any hitter who satisfies at least one of the following:


The market has had several years to flesh out the effectiveness of the 2014 FS1 fastpitch bat from Easton. We, as well, have extensive experience with the FS1 and have discussed feedback on this bat with players at several levels of the sport. We used these data points, and the litany of online reviews on the FS1, to compile this robust 2014 Easton FS1 Fastpitch Review.

All in all, the 2014 Easton FS1 stands as one of the marquee bats in all of fastpitch bat history. It was produced at the pinnacle of Easton’s Power Brigade line-up which ruled the market in baseball and softball. Some, in fact, consider the 2014 FS1 to be the best fastpitch bat ever. It, along with the 2013 FS1, might be the standard with which all fastpitch bats are compared. The FS1’s light swing and big barrel attracted several players across all levels of the sport. It reports fantastic performance across the entire barrel, even by today’s standards. The two piece connection, produced to absorb vibration in the hands, is still used by Easton three years later.

Outside the Easton lineup, DeMarini’s CF series in the drop 10 are also light swinging two piece composite bats with an oversized barrel. Louisville Slugger’s LXT line is also worth a look.

Before the THT composite took over Easton’s flagship line via the MAKO, they used a composite structure referred to as IMX. IMX is the marketing vernacular Easton assigned to the composite material they used to produce both the barrel and handle of the FS1. IMX was also used in Easton’s baseball line.

The FS1 from 2014, like ones previous, is a two piece IMX composite bat with a balance point toward the knob. As such, it was a bat with a low MOI (swing weight) that didn’t transfer mishit vibrations from the barrel to the hands. Off hits feel bearable and hits on the considerable sized sweet spot feel like butter.

The FS1 in 2014 comes in a drop 10 only. (The Drop is a the numerical difference between the length of the bat in inches and the weight of the bat in ounces. A 31 inch drop 10, for example, weighs 21 ounces.)

If you recall, the FS1 was complimented in Easton’s lineup with a heavier swinging sister: the Easton FX1. The FX1 was the end loaded version of the FS1. The FX1 in 2014 is a drop 9. Hence, those looking for a more end loaded bat, should look for the 2014 Easton FX1. Same construction, just an end load.