A conversation on the best hitters of all time must include Rod Carew. With a .328 average and membership in the 3,000 hit club, few have matched his numbers—especially in the modern age. We scoured the internet for information on his bat and conglomerate it here for those interested in details on Rod Carew’s bat.

What Size Bat Did Rod Carew Use?

Like most contact hitters we have highlighted, Carew tended toward lighter swinging bats. We could not locate a bat over 32 ounces and a few were in the 29-ounce range. Carew, like Wade Boggs, Ozzie Smith and Dee Gordon, used a light bat by today’s (or any day’s) MLB standards.

Over his 19 year career, we found no evidence his bat size changed much, if any at all. The average size of a Carew bat was 34 1/2 inches long and 31 ounces.

What Model Bat Did Rod Carew Use? 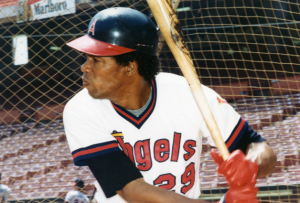 We can locate one Rawlings Adirondack bat attributed to Carew’s 1980 season. Otherwise, from 1967 to 1985, his bat log is littered with Louisville Slugger branded bats. In particular, the C243 from Louisville Slugger appears to be his bat of choice. But, you can also find some F147’s in the mix.

Over 19 years, Rod Carew played for only two teams: The Minnesota Twins and Los Angeles Angels, in that order. In his rookie season with the Twins, he was named AL Rookie of the year. The following 17 years would also be All-Star years for Carew where he amassed 3053 hits. None more significant than number 3,000 on Augst 4, 1985.

At that time, only fifteen players had hit for 3,000. Consider this: of the fifteen 3000 club members, only eight reached the mark previous to 1970, leaving seven to seize the distinction in the 1970’s. Skip the 80’s for a minute. In the 1990’s, seven more players joined the 3,000 club. Another seven since 2000 have been added. If you are keeping track, that makes twenty-nine, 3,000 hit club members total from all decades excluding the 1980’s. During the 80’s, only one single player would reach the milestone. And the only player to reach the 3,000 club within his decade? Rod Carew. Carew may not have compiled the most hits of any player, but within his generation, and the unique time of defensive prowess and pitcher advantages of the 1980’s MLB, Rod Carew stands alone.

Incidentally, that 3,000th hit on August 4, 1985, which Carew drove with ease for a single to the opposite field, came as the Angels played Carew’s only other team: the Twins. Fitting.

Carew’s bat is characterized by a thin handle and a light amount of pine tar. His gamers often bore his jersey number (either 29 or 21, depending on the year) on the handle or knob.

We reviewed a number of sources for information on Rod Carew’s Bat. As always, the PSA Bat Facts page is informative. American Memorabilia Auctions has a number of Rod Carew bat auctions up. Here, for example, is a great Rawlings Adirondack model from which we gleaned information. Baseball References stats on Carew are also helpful.