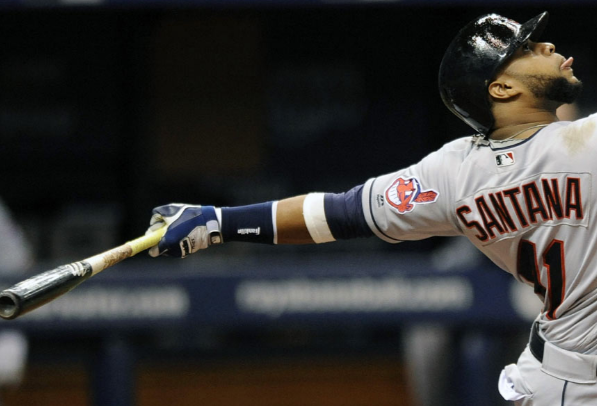 After searching every imaginable place and exchanging emails with manufacturers, we gathered reliable information on the size and preferred model of Carlos Santana’s bat. Included as well, are his best at-bat to date and all the information we found on his game used bats. The sources from which we gathered the information are linked below.

What Size is Carlos Santana’s Bat?

The heaviest bat of Santana’s we found is a 32.8 ounce Sam Bat. Others are close to that, and as far as we could tell, do not range outside the 32 to 33-ounce range. In terms of length, Santana bats are 33.5 to 34 inches long.

What Bat Model Does Carlos Satana Use?

Carlos Santana uses several different models. For a while we thought he would never use anything but a Sam Bat, but, more recently, we confirmed his use of Marucci’s sticks. In particular, the C341. His Sam Bat is often an SG1. In his earlier days, he often used the Slugger H238.

Don’t expect to see any grip or tape jobs on Santana’s bat. As well, the use of pine tar is limited. Expect, on the other hand, well-worn bats in the 33 to 34-inch length and the 31 to 32-ounce weight range. Sam Bats and Marucci are the most common. Outside of those two brands, be wary of a real game used Carlos Santana Bat.

The most significant, game-changing, at bat for Carlos Santana came on April 29, 2011 (thanks to Baseball Reference for declaring it so).  With the score tied 5 to 5 in the bottom of the ninth inning, Santana would face Joaquin Beniot, a Tiger reliever at the time. With the bases loaded on a 3-1 count, Santana, from the left side of the plate, would utterly destroy a 94 mile per hour fastball. It would land over the right field fence as Santana admired the view. The Indians win 9 to 5.

Collections Auctions Bat section has some helpful information on Santana bats. As well, Gold In Auctions Santana auction is helpful and amazing. We also referred to Pristine Auctions for some Santana bat insight. The Baseball Reference Guide for Santana is, as always, invaluable.