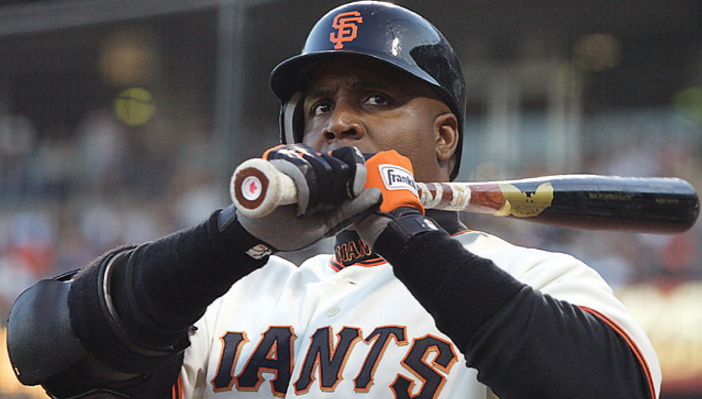 For much of his career, Barry Bonds used the Sam Bat’s pure maple bat. The bat is model number Sam Bat 2K1 and Barry had it tuned to the size of 34 inches and a weight of 31.6 ounces. Barry Bonds’ bat stands at a significant tipping point from the ash wood bat market to the now famous hard maple bats. In particular, maple bats made by Sam Bats grace the plates in the hands of some of the best in the business, including Stanton. They also rank on several best wood bats lists.

*Bonds would sometimes use different bats and different bat brands than the ones listed above. Especially in the 1986 to 1996 era. Once he found Sam Bats and fell in love with the 2K1, it is hard to say if he ever used anything else in game.

Barry bonds predominantly used two different bat brands throughout his career. The most famous was the Sam Bat 2K1. Its length was 34 inches and it weighed 31.6 ounces. He used these bats almost exclusively from 1997 until his retirement in 2007.

The previous 8 years he was seen swinging the H238 from Louisville Slugger. Some of these 33.75 inch long, 33.2 ounces bats have been found at auction. There are also at least some existing game used bats of the P72 model also from Slugger, but the P72 is considered the exception in his pre-1997 years.

Many of Barry Bonds’ bats have been tracked down and are held in private collections. Many of those have also been identified at certain at bats. Take the above pictured H238 from Slugger in 1993. Barry swung this bat to hit career home run 185 on May 15, 1993.  This bat has been photo matched to this particular home run.

Sam Bat is a Canadian based company that makes only maple bats. They were, in all reality, the bat company that changed the name of the wood bat game that was heretofore dominated by Louisville Slugger’s ash bat.

We review this topic at length in another post. Here, for the sake of brevity, we simply point out how fundamentally different the wood bat game is due, in large measure, to Barry Bonds’ use of the Sam Bat in the late 1990’s. This opened the flood gates.

There are dozens of great resources on Barry Bonds’ Bats. A simple Google search should get you on the right track. We feel like we read every one of them for this post.