Of all the player bats we’ve studied, no one has used as many models as Albert Pujols. His exclusive use of Marucci for most of the last decade might make many forget, but Pujols’ bat chronology is long and storied. We enjoyed collecting and analyzing the extensive information available on Albert Pujols’ bat, and we hope you enjoy our passing it along.

What Bat Did Albert Pujols Use?

Since 2008, Pujols has used nothing but Marucci’s models of bats. Marucci, you may know, is a player owned company where, as we understand it, folks like Andrew McCutchen and Albert Pujols have some sort of ownership interest. Pujols also has his own model, predictably called the AP5. His particular model, depending on the day, is usually the AP5-P, but the AP5-M and AP5 are occasionally with him at the plate. You can actually buy the AP5.

At the beginning of his career, Pujols used a slew of bat brands starting in his 2001 rookie season through 2008. Truthfully, most modern players’ bat charts look like this. But Pujols’ bat pedigree has been so well documented, it was easy to track down the entire list.

Although he used a plethora of bat brands his first seven years in the League, the frequency of Sam Bat SG1 and JB1 auctions with Pujols’ game used markings on them, suggest this may have been a highly preferred brand. Next, if we had to guess, was likely Sluggers’ I13L. From there, you name it. Max Bat, X-Bat, Hickory Bats and the works.

What Size is Albert Pujols’ Bat?

To date, Pujols has been very consistent with his game used bat sizes. Even across different brands he uses that same 34 to 34.5-inch bat with a drop between 3 and 1. The most common we found at auction was a 31.5 to 31.9 ounce 34-inch bat.

What was Albert Pujols’ Best At Bat? 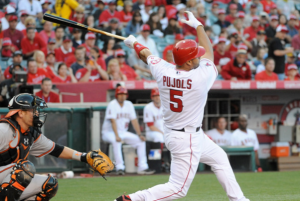 The 2011 World Series pitted the Rangers and Cardinals against each other. It would take seven games to decide the winner. Throughout those seven games, three were decided by 1 run, one was decided by 2 runs, two were decided by 4 runs and the other, game 3, was decided by 9 runs in a 16 to 7 route by the Cards. 6 of those 16 runs in game 3 would come on the Marucci AP5 bat of Albert Pujols who hit three monster home runs.

That night, October 22, 2011, Pujols may have had his best hitting game ever. On 6 plate appearances, he would gather 5 base hits: 2 clutch singles and 3 home runs. Only four other players have hit for 3 home runs in a World Series game (Babe Ruth, Reggie Jackson and, more recently, Pablo Sandoval). Pujols would plate 6 runs and hit for 18 bases on all of a 21 pitches. He was pure magic that night and, outside of a hard hit ground out to 3rd base in the top of the 1st, flawless.

Albert Pujols has now played in sixteen World Series games. Over those games he has only hit four home runs total. Three came on the same evening of October 22nd, 2011.

In the modern era, game used bats are relatively easy to verify. Pujols’ bats especially, simply because he tended to drive his game used bats into charities and well known auction houses. Based on the number of fakes, and the number of bat brands that claim to have been swung by Pujols, we’d caution a wholesale belief in many claimed game used Pujols bats—especially those off the beaten path.

Birdbat, a new site to us, had some OCD when it came to Albert Puljos’ bat. That data sources are remarkable, but stops by 2010. What Pros Wear Section on Albert Pujols showed some images of the extra P on the AP5P from Marucci.  GoldinAuctions is always worth a visit to see some verified pro stuff. PSA’s Pro Bat Facts are also a trove of information on big time player bats. Amazon’s product page on the AP5 was actually helpful too.