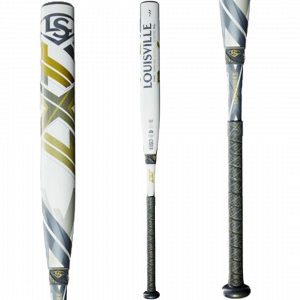 The Louisville Slugger LXT 2021 is a two-piece composite bat with a big barrel and top-grade performance reviews. The fastpitch bat has dominated the space and, for 2021, comes in a drop 8 through drop 11. They upgraded the 2021 end cap as well as a new grip. Otherwise, it’s about the same bat—which is an excellent thing.


Our hitters like the semi-flexible handle, big barrel, and top-end performance. Although slappers could use it, it’s much more a middle power and base hitters bat. They thought the Slugger LXT for 2021 swung heavier than a bat like the CF but noticeably lighter than a bat like the Easton Ghost Advanced.

The Louisville Slugger LXT 2021 is for middle power and base hitters types at all sport levels. The drop 8 and 9 serve the big-hitting high school and collegiate players well. The drop 10 and 11 are made for those who still need bat speed help but want at least a bit of gumption in their bats. Exit speeds are as good as they can get in the 1.20 ASA fastpitch approved bat world. Expect to get and pay the most for the 2021 LXT.

Slugger Amazon eBay JustBats
The Louisville Slugger LXT 2021 drop 8 is a two-piece composite bat built on a long tradition of fantastic and highly reviewed LXT bats. This year's version updates the endcap and grip but has that same big barrel and semi-flexible feel on hits. The drop 8 is made for big hitters and swings about 20% heavier than the drop 10 in a similar lenght.
Sizing: 33, 34-inch
Release Date: September 15, 2020
Serial: WBL2454010
Bat Type: Two Piece Composite
Barrel Size: 2 1/4

Amazon eBay JustBats
Slugger's LXT in a drop 9 for 2021 is a two-piece composite bat with a balanced swing. They changed up the end cap and a new grip when compared to the 2020. But, all in all, its the same big barrel, semi-flexible conenction piece on a light swinging two piece composite. It's one of the, if not THE, most popular fastpitch bat on the market.
Sizing: 32, 33, 34-inch
Release Date: September 15, 2020
Serial: WBL2453010
Bat Type: Two Piece Composite
Barrel Size: 2 1/4

As we see it, every bat once to be like the LXT. It has dominated the two-piece composite bat for so long that it feels like every other bat is just trying to be like it. That includes bats like DeMarini’s CF, Easton’s Ghost Advanced (although end-loaded), Marucci’s Echo, Mizuno’s Power Carbon 2, and so on. The difference between fastpitch bats is slim, but the LXT still leads the pack.

Compared to the 2020 LXT, the LXT for 2021 has a different end cap and a new stock grip. Both marginal changes didn’t affect our player’s sense of the bat’s feel or performance. It is still a semi-stiff two-piece composite bat with a big barrel and balanced swing.

Louisville Sluggers LXT 2021 is a two-piece composite bat with a long barrel and a generally balanced swing. The drop 11 doesn’t swing as light as you might expect, but the drop 8, 9, and 10 all swing with 5% of the average of fastpitch bats in their given length and drop class.

There is plenty of marketing jargon used to describe the LXT for 2021 (as there is for every bat on the planet). Here is what Slugger uses on the 2021: PBF technology (meaning a disc inside the barrel), VCX2 connective piece (which is an elastic plastic-type piece that goes between the handle and barrel to make it feel better on hits), the COPA end cap (an endcap), and an LS Comfort Grip because, apparently, they didn’t want to pay for the rights to stock it with Lizard Skin as they have in years past.