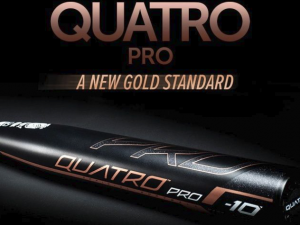 Our hitters generally liked the performance of the Rawlings Quatro Pro performance fastpitch bat. It swung real balanced, felt like it had a lot of pop and felt relatively stiff through contact when compared to the other 2020 fastpitch bats. It did not feel much different than the 2019 version of the bat, but it did hit well and comes recommended especially by our bigger hitter who chose it as their 2nd favorite.

We really like the drop 11 with its numerious sizing options. Those with a need for a real light swing and are not interested in trying out the LXT or DeMarini CF should be impressed with the 2020 Quatro Pro in fastpitch.

In terms of exit speed, the Rawlings Quatro Pro fastpitch bat did well, above average, for our middle and bigger hitter. The smaller hitter (sub 60mph bat speed) struggled to make it sing off the tee. But, each of our hitters liked the feel at contact on live pitches as well as the looks of the sleek 2020 Quatro Pro fastpitch bat.

Do note, there is a Rawlings Quatro Pro Fastpitch End Load fastpitch bat too. This bat comes in a drop 9 and 10. The drop 10 has a swing weight much more in line with Easton’s Double Barrel Ghost (which is heavy). The Quatro Pro End Load is made for big collegiate type hitters looking for the most bang they can get.

In the middle of the road swing weight bats with a two piece composite design and big barrel your options feel endless. We think the DeMarini Prism and Mizuno Power Carbon are good comparisons in terms of swing weight. The connection point is more stiff, at least our hitters thought so. It feels more like the new Slugger RXT in its give on hits and mishits.

Compared to the 2019 version of the Quatro in fastpitch the 2020 Quatro pro has a redesigned end cap to help bring down the swing weight and a new Lizard Skin grip that comes stock. Otherwise, expect the same suspended inner barrel system with a focused flex connective piece. Durability, not much an issue with the Quatro Pro fastpitch, should be reasonable.

On the outside, the barrel is a composite material built for durability and size. The inner and outer barrel work together to create legitiamte pop along the full length of the barrel, increase durability and maintain an legally performing bat.

Also, Rawlings uses the “Focused Flex” connection piece. It is, basically, a silicone collar that connects the barrel and handle. The idea behind it is to keep enough stiffness in the bat to be effective yet dampen the sting in the handle when the ball isn’t hit squarely. It does work—as has been proven in their baseball bat Quatro that uses a similar design.

New for 2020 is the agreement Rawlings has with Lizard Skin to provide stock, custom Lizard Skin grips on each Quatro Pro fresh out of the wrapper.