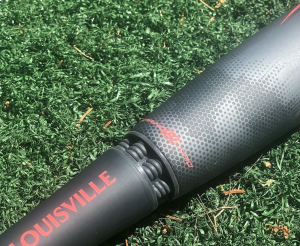 Our 2020 Louisville Slugger RXT Review entails three different hitter feedback on over 400 hits both live and off a tee. We measured the bats swing weight and balance points in relation to all other performance fastpitch bats for 2020 and 2019. We took video and recorded some directly player feedback. In short, the RXT is a two piece composite built with a large barrel, stiffer connection than the LXT and a middle of the road swing weight. It replaces the PXT in the 2020 Slugger offering but is more like a stiffer connection in the balanced LXT than it is an upgrade of the heavy swinging PXT.


Our hitters thought the RXT is “way” lighter than the PXT from 2019. They also felt the difference in the connection when compared directly to the CF from DeMarini and LXT from Slugger. Our experience is that stiffer connection often makes it feel worse in cage work so we expect the RXT’s general reviews to be less than stellar. But, in terms of actual exit speeds, our data showed the RXT performed just as well as any fastpitch bat in the 2020 market.

As far as recommending the 2020 Louisiville Slugger RXT, it should work well for the serious fastpitch player who wants more stiffness in their balanced swinging bat—but not necessarily the same sort of stiffness as a Slugger Xeno. Although many like the smooth smash afforded by the softer connection of a bat like the Slugger LXT, the 2020 Slugger RXT gives more power transfer to the ball at the direct expense of  feeling it in your hands more. As such, we recommend the 2020 RXT for players that want a stiff bat in a balanced fastpitch bat with a big barrel like the LXT.

As well, it only comes in a drop 10. So, we would not sacrifice the right size for the RXT. Meaning, if you’re a drop 9 or drop 11 hitter, for example, then take the RXT off your list.

Bats like the Easton Ghost Double Barrel swing a lot heavier than the RXT but still have the two piece composite design.

If we were forced to choose a comparable bat we’d tend towards DeMarini’s CF. The RXT, like the CF, uses a ring free design on a balanced swing weight. But, do note, the CF connection piece will feel much more forgiving than the RXT.

There was no 2019 RXT. There was, however, a short lived PXT. That 2019 PXT was not very well received. The barrel size and stiffer feel were good but the heavy swing weight was an issue for most.

Although some might consider the PXT as the previous version of the RXT we don’t. Granted, it was a ring free barrel with an otherwise similar name. But, in terms of how it feels in the cage and initial player feedback we think it more reasonable to think of the RXT as a break from the LXT with a stiffer connection than the next generation of the PXT.

Like all fastpitch companies, DeMarini uses some marketing jargon to describe the construction of their bat. We take you through each one of those bullet points you can find on the ‘specs’ of most product pages for the 2020 RXT. The marketing terms are in bold below.