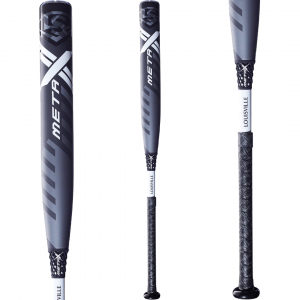 The Louisville Slugger Meta Fastpitch bat is a new bat for the 2022 lineup and adds a similar bat to what is already terribly competitive. It uses a mesh composite bat similar to Slugger’s use in slow pitch softball, an upgraded connection piece compared to the LXT, and a new endcap. The 2022 Slugger Meta fastpitch bat is an entirely re-engineered bat for fastpitch where Slugger hopes to reinvent themselves in a market that the Easton Ghost has become the bat to beat.


If you want the ‘latest and greatest that isn’t the Easton Ghost because of its durability issues, then take an honest close look at the 2022 Louisville Slugger Meta. The 2022 Slugger Meta is a newly engineered bat that isn’t some repaint of the LXT or Xeno. Since the Easton Ghost went nuclear in market share, Slugger has struggled to find their stride with this bat (or any fastpitch bat). But, no doubt, this 2022 Slugger Meta is the train Slugger intends to ride to the fight.

The 2022 Slugger Meta swings light, has an excellent barrel, and is slightly stiffer than the Easton Ghost connection piece. Although late to the party, the bat comes in a drop 11 and the initially released drop 8, 9, and 10. Overall, the reviews have been mixed. The two-piece composite fastpitch space is as competitive as they come. At a premium price, the Meta has not made a move on the Easton Ghost like we think Slugger hoped to see. But, in any case, we expect this bat to be around for a while, and we look to see Slugger improve it as it chases the leaders in the space.

Two-piece composite bats are replete in the fastpitch space. Look for similar bats in the Slugger LXT, Easton Ghost Advanced, and DeMarini CF or Prism.

The 2022 Slugger Meta for fastpitch is the first-year release, there are no previous versions.

The Meta uses a few tricks from the slowpitch and baseball space in its construction. Most of these terms are all marketing jargon, so there isn’t much to glean from them aside from your reading skills. Connection pieces like the VTX or the Mash Composite mean little other than signifying that this bat isn’t the LXT or Xeno of years past. Instead, Slugger has taken what works in different lines and some new engineering to make this 2022 fastpitch Meta.

A bat built to run this game. Just like you. The Meta Fastpitch Bat from Louisville Slugger, now available in -11 for the first time, features a revolutionary patent pending cantilevered gapped barrel design that maximizes performance and expands the bat’s sweet spot. The low compression barrel design and unmatched feel went through years of playtesting with elite talent. The end result? A cutting-edge high performer that’s ready to go as soon as you unwrap it.