Was Yoenis Cespedes’ Throw the Greatest?

Was Yoenis Cespedes’ Throw the Greatest?

(Since the below was posted the blog sphere continued to erupt over details concerning the greatest throw ever. Those with a more sophisticated (read: accurate) approach got involved. Eric Lang produced a ‘white paper’ on the subject you can read here. It shows the Gullien throw as the fastest @ 101.6 and Cespedes not far behind @ 101.5)

A few days ago the blog and twitter sphere erupted after Yeonis Cespedes made a throw from left field to gun down Howie Kendrick at home after Yeonis misgloved a Mike Trout hit. But was Yoenis Cespedes’ throw the greatest ever?

Not many have been bold enough to claim Yeonis’ throw the ‘best ever’ but folks are at least trying to put it in context. A quick google search shows Cespedes’ recent throw made the top 10 in most lists but none I’ve seen call it the best ever. The best is usually reserved for this throw in 1989 by Bo Jackson (called “The Throw”), this “mutant” throw by Jose Guillen in 1998 or this double play ball throw by Yasiel Puig in 2013. All fantastic throws by any stretch of the imagination.

“The Throw” by Bo Jackson, 1989, Often Considered the Most Amazing Throw Ever

Let me explain why Cespedes is the best ever. For starters, clearly the answer is debatable when it comes to the ‘best ever’. Bo Jackson, from the warning track, lit up an extremely fast Harold Reynolds who was sprinting in for a winning run. Jose Guilien wins the longest throw award–with accuracy pitchers only hope for 1/5 the distance. Puig’s rookie season and mindless antics were in stark contrast to a heads up play and laser guided missile which ended an important game on a very rare 8-3 double play. Cespedes, on the other hand, botched a routine two hopper. (It may be Yeonis is doing this on purpose–and who wouldn’t with a gun like that–but making up for a bad play with a good one may not be commendable).

Yet, objectively, its hard to suggest the best throw isn’t the fastest throw. Knowing the distance of the throw as well as the hang time we can get a pretty good feel for the speed at which the ball left the player’s hands. You could spend your time doing a lot of math or you could use the help of Dr. Alan Nathan who created a baseball trajectory calculator you can download at his site. Once you get a feel for the spreadsheet you also need to understand how to use the ‘solver’ add in on excel.

When calculating exit speed there are several variables which we must assume: humidity, wind speed, ball weight, off and on axis rotation, etc. Any one of those could (and would) change the above numbers.

There are some other variables we hope to know like elevation: Jose Guillen, for example, made his long bomb in the Mile High City, Bo Jackson was in Seattle, Puig in Los Angeles and Cespedes in Anaheim. 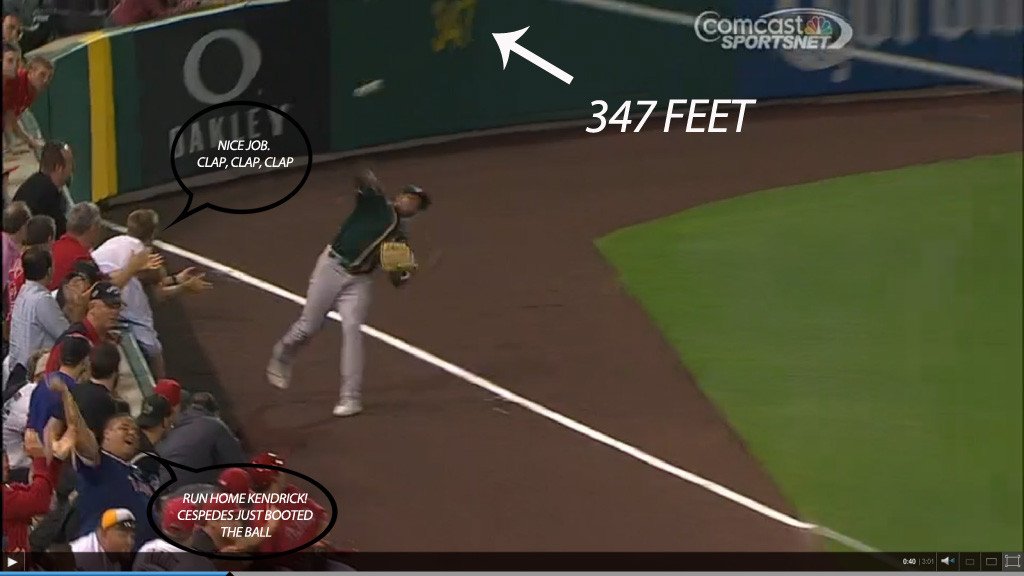 Jose Guillen Waits at The Wall 375 Feet From Home Plate About to ‘Unleash the Kraken’. 1990 Resolution not much better than the 1980s.

After a painstaking hour of video and the use of some rusty geometry, I took Dr. Nathan’s calculator and ran some solve equations in excel for each of the “best of the best” throws from outfield. As put forth in the table above, Cespedes had a ball exit speed of 109mph–1.1mph higher than Bo Jackson. Guillien hang time and distance would have won him the prize at sea level, but at his altitude, hang time and distance the ball only traveled 106mph.

Before you call cops on my craziness of suggesting that Cespedes threw the ball 109 mph, let me be the first to admit there is plenty of room for error in my calculations. Yeonis may be much closer than 317 (and some are claiming he was more like 300 feet–which would make his throw much less impressive around 101mph–and more reasonable). There may have been a serious wind towards the plate. Yeonis may have thrown a ball that had a defect (like too light or flatter seems). There could have been a seamless skip in the video feed from mlb.com (which I am a subscriber) that doesn’t give an accurate measurement of the hang time. The list of problems and errors could go on and on.

As well, the margin for error on this data is slight. 1st to 3rd place is less than 3mph difference and Bo Jackson is only 1.1mph “slower” then Cespedes. Even a marginal and honest miss in some of the variables would put Bo’s equal to Cespedes.

But this much I can say with some confidence, based on the data we do have, and the hours of video I have watched of throws from the outfield home and measured with care in a model that is proven to display ball exit speed: Yeonis Cespedes’ rope from left field, on June 10th 2014, may very well have been the fastest we’ve ever seen a baseball thrown.

Does fastest also mean greatest? I guess I’ll leave that for the internets to decide–but, if all the four throws discussed above were impossibly accurate and impeccably timed, what else is there but speed?