The Worst Bats Ever | How To Increase your ROE & Should You Rub Your Bat?

To go along with our best youth baseball bats, we thought it appropriate to make a list of the worst bats ever made. Forbid we leave out the other end of the spectrum! For reasons we explain below, each bat has its own path to the top—er, bottom—of the list. Some earned the distinction for straight out terrible performance, others for government recalls and others for ridiculous marketing.

Initially we began this article with an apology to the manufacturers whose bats we were about to disparage. Knowing they often read these posts, we thought it might be a friendly way to poke at some wounds, some all too fresh, they would rather not have reopened. In the end, we are confident they feel like these are disasters as much as the industry does. And in many respects, it is fun remember the good ole days when more than just a couple bats and a lot of marketing absolutely sucked.

To that end we give three cheers for those willing to put bats out there for anonymous parents and players to bash at will. We are not laughing at you our dear manufacturers, rather, we are laughing near you.

Combat Grifter was a Grifter

The Combat Grifter may have been the easiest choice for this worst bats ever list. As if the name Grifter wasn’t enough evidence the bat was a sham, you can still find these bats for sale all over the place, new in wrapper. Maybe the word Grifter means something akin to awesome in Canada (where Combat was produced before going defunct)?

The Grifter served as a replacement bat for many full composite bats—including the very famous Combat DaBomb B2—that were banned in 2013 for Little League play. That bat exchange was more egregious than the Hornets trading Vlade Divac for Kobe Bryant. It was exchanging power for a hand-ringing black hole of a bat that did nothing but break.

We made the awesome mistake of purchasing this bat as one of our very first forays into the youth performance bat space. Depending on the diameter, the bat used anywhere from a drop 9 to drop 11. In reality, the bat often weighed more like a drop 6. Ours broke on the handle. Twice. It stands as the worst bat ever among both players and distributors.

After a month on the market, Slugger’s ONEX fastpitch bat was recalled. The bat was breaking at unprecedented rates. And, scarier still, the bat’s barrel was dislocating from the handle during the swing and flying into the field of play. In other news, players who used the ONEX found their “reached on error” frequency shoot through the roof!

As such, the Consumer Product Safety Commission, a division of the United States Government, required a mandatory recall on the bats. Whenever the Federal Government steps in to remove your bat from a game, you can bet it will make the list of worst bats ever. We are unaware of this ever happening with any other bat.

Of note, Slugger’s fastpitch selection has recovered beautifully since that 2013 recall. And in some respects, that recall set the industry, and Slugger, on the path for the creation of the LXT and XENO lines that we know and love today. As they always say, from the ashes of a government recall….

If you are not sitting down, you should be. The PhD ExoGrid 5150 from Rawlings is not a terribly performing bat. No, actually, we had this bat in our cage and it was often a decent choice for some hacks now and again. It was durable and appeared to have some good pop and stiffness—just like a bat should.

But, we were directed to this video recently. Had you told me it was done by a group of third graders and their hyperactive PE teacher in a fifteen minute morning recess we would have still told you the video sucked. But Rawlings’ video department circa 2011? You’ve got to be kidding me.

Dead serious: today you could get away with a video like this. In fact, I think Demarini or Rawlings should make a remarkably terrible video like this and see if they can get it to go viral. But, we dare suggest, in 2011, such spoofing was not unintentional. This video is pure awesomeness.

The Eclipse from Worth, which was first produced in 2010-ish, is the predecessor of today’s Rawlings Fastpitch Quatro bat. Granted, several iterations between the Eclipse, 2 Legit from Worth and the eventual name acquisition by Rawlings into a fastpitch line has been quite the journey. But in some regards, the Eclipse was the company’s first attempt at performance softball.

Along the way, Rawlings added a few features to the fastpitch bat. Many of those make the Fastpitch Quatro one of the best fastpitch bats on the market. Those added improvements Include an inner barrel, a composite handle and a synthetic collar around the connection. But, they also removed some awesome features from the eclipse. See what we mean here:

The bat is blue. But if you want it to be white, you add heat. You can do that by rubbing the bat. And according to this marketing video, you’ll need to rub the bat at any given moment depending on when you want to be in fashion—because nothing says fashion like using your on deck time to rub your bat like a lunatic. 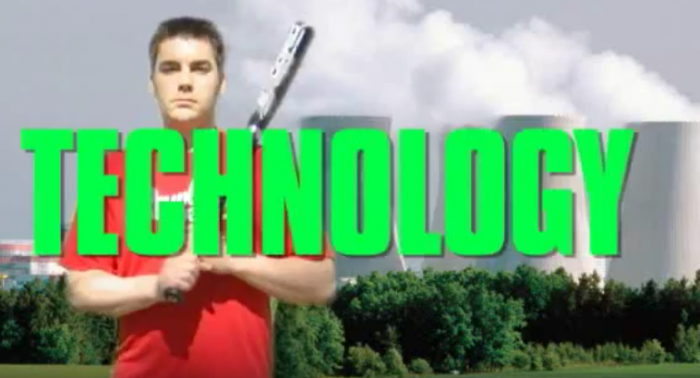