What Bat Has The Most Pop? Find Out How To Find It

If you’re looking for info on what bat has the most pop, you’ve come to the right place. Some argue BBCOR and BPF standards have leveled the playing field for top-shelf bats, implying any particular model cannot be better than any other, as each bat can only be as hot as the standard allows. They conclude no bat has the “most” pop, and bat preference is no more than, well, preference.

As we discuss below, there is some truth to this, but there is another side to consider that proves certain bats do have “more pop.”

If you’re looking for our best bat picks, then go here.

We define pop as batted ball speed, often referred to as exit velocity, while holding constant all other variables. Economics call this strategy ceteris paribus. Those other variables are so numerous the comparison of one bat to another is terribly difficult.

To name just some of those variables: swing speed, swing weight (MOI), the ‘bounciness’ of the baseball, pitch speed, and the barrel area where contact is made. Assuming we could hold those variables constant, the speed at which the ball leaves the bat would be considered the “pop.”

The Empiricist’s Take on Bat Pop 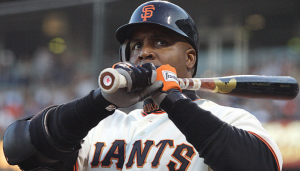 In a dinner table argument, we could make the case that Barry Bonds’ bat—the bat Giancarlo Stanton uses now—is the bat with the most pop. Indeed, the Maple Sam Bat led Bonds to the home run title. And no one in recorded history has hit a ball harder off the bat than Stanton (123 mph). Ergo, the maple 2K1 Sam Bat has the most pop.

Does that ring true?

Bonds’ home run title and Stanton’s 123 mph worm burner (that turned into a double play, incidentally) were aided by a strong guy with a strong swing. To say nothing of pitch speed, pitch angle, barrel contact location, and a host of other variables that have nothing to do with the bat. Logic couldn’t prove the 2K1 Sam Bat has the most pop for everyone else. In fact, for all we know, had Bonds or Stanton used a different bat, the results could have been better.

In the end, though, we would consider that baseball isn’t played in a vacuum. Therefore, when the question is asked, “What bat has the most pop?” the answer must be one real life has proved, and that leads us to the 2K1 Sam Bat. Indeed, the empiricist in all of us would struggle to rebut.

What Bat Has the Most Pop, For Me?

If we concede, for the sake of the dinner table, that the Sam Bat is proven as the bat that can create the best exit velocity (in real life), we change the question to be more functional for us. That is, what bat has the most pop for me?

We submit the following three areas of insight to help you on your way.

BPF and BBCOR standards test exit velocity at every inch of the barrel. (We assume, although not certain, USABat standard tests do too). This means every approved bat must pass the test at every inch and any over-performance at any spot disqualifies the bat entirely. Do not assume that BBCOR and BPF standard approval implies the entire length of the barrel performs the same. Indeed, no bat has yet conquered that feat.

It should be assumed that the distribution of performance peaks toward the center of the barrel and tails off towards the handle and end cap. That peak is referred to as the sweet spot. Some bats have longer sweet spots than others, and some bats perform better toward the end cap and handle relative to the sweet spot than others. Some bats see a lot of change in performance when comparing their sweet spot to their extremities. Others are more uniform. 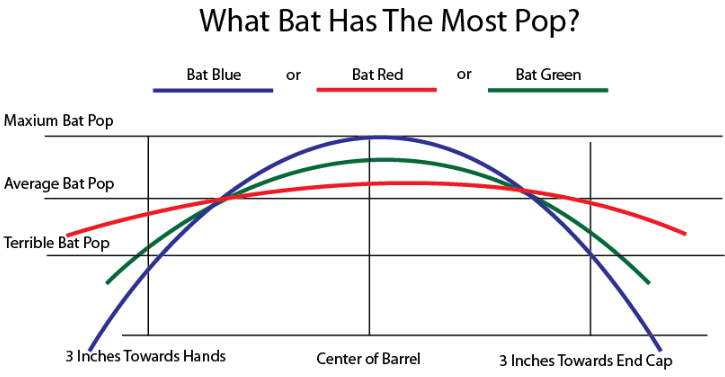 The above-exaggerated chart attempts to capture the possibilities of peak performance along the length of the barrel. All three bats would pass BBCOR and BPF standards yet clearly are not the same in terms of overall performance.

Which one has the “most pop?” It depends on how effectively YOU can square up the ball in the middle of the barrel.

Area 2: Who Has The Longest Sweet Spot? 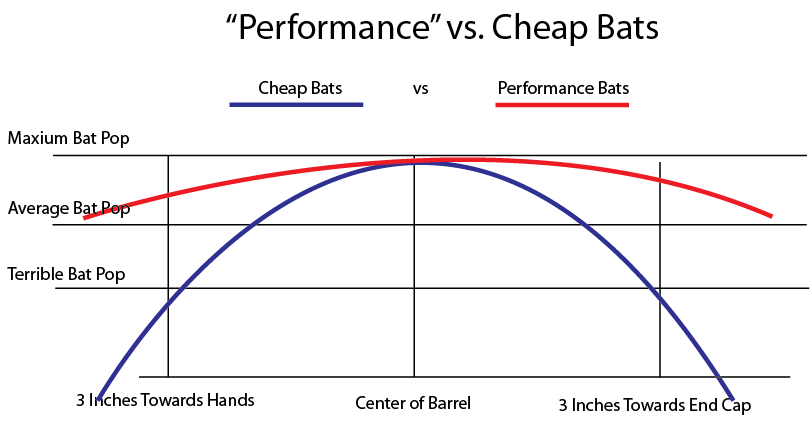 There is an argument among bat manufacturers as to the ‘length’ of their performance sweet spot—and we’d expect no less. A few companies, like Mizuno, have tried to expand the length of their sweet spot along the width of the barrel (see what we are talking about here), and at least one other in the Senior League and Youth barrel space claims their sweet spot is less ‘mounded’ than other bats in the performance space.

Without manufacturers releasing their standard test data (they never have, and as far as we gather, never will), it will all be marketing hype. But, after years of hitting, we submit the sweet spot’s length is the main differentiating feature in “performance” and “cheap” bats. We also accept that composite barrel bats tend to have a longer sweet spot than aluminum barreled bats. There are some exceptions to these rules, but if your goal is to find the bat with the longest sweet spot because your hitting style needs as much max performance barrel as is possible, then those rules hold.

What has more pop?

We’ve long held the notion that the better you become at hitting the less the bat matters. The chart above explains that as well as any. If you are a good hitter and can always hit the ball in the center of the barrel—where almost any bat peaks in performance at the standard—then (at least according to the fictitious bats in the chart above, it doesn’t matter which bat you swung). 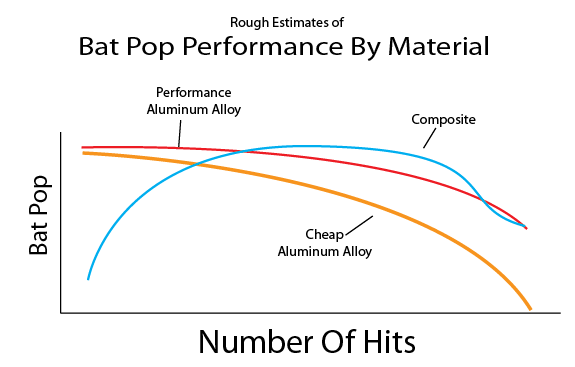 Even the best bats only perform at peak power for a limited amount of time. For aluminum, it is directly out of the wrapper. For composite, you must work the bat in by hitting it off a tee (250+ hits is generally recommended).

If you intend to find the bat with the most pop, then verifying the type of barrel you have and lining that up with peak use performance is a must. Aluminum: right out of the wrapper; composite: work it in. You can read more about why composite and aluminum have different work in times here.

Of note, many claim composite bats continue to get hotter as they are more and more work in. However, the best available data suggest an optimal performance period window time for max pop in a composite bat. It suggests they do begin to lose their pop after a thousand hits. Between 250 and 1000, the bat is in peak performance.

As well, we guess that aluminum bats hold their pop much longer than is generally believed. Manufacturers and vendors have enormous incentive to tell you that aluminum deteriorates over time but any NCAA junkie will tell you that great NCAA hitters are often using old, and sometimes very old, aluminum BBCOR bats. 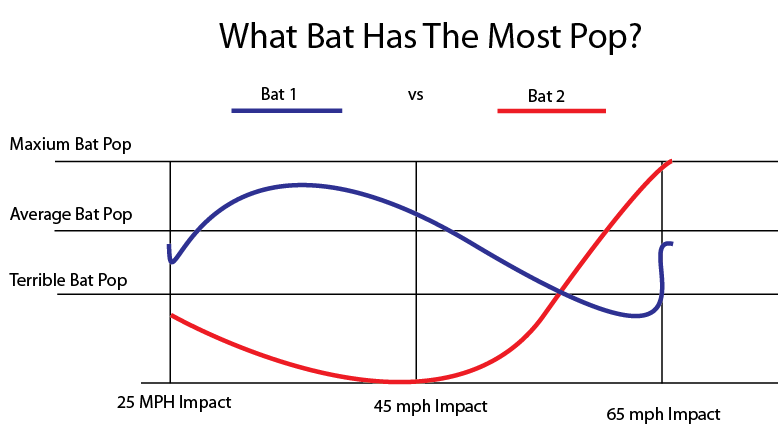 It is a mistake to assume, as many manufacturers marketing teams suggest, that a test certification ‘right up to the line’ of approval means their bat performs as well as any on the market.

What We Learned About the Best Bat Pop

We learned a couple of things:

Finding the Best Bat Pop For You

In short, follow these steps to get the bat with the most pop: 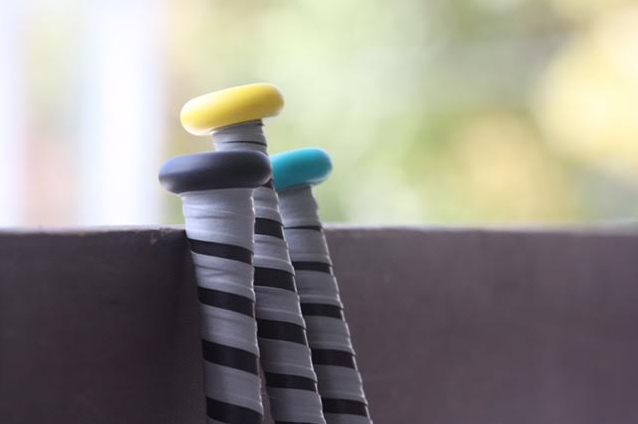 DL1 – I play in league that approve ASA bats . I use Worth EST COMP XL bat and Demarini Juggy and Mercy .