The Best Replacements for The Goods and the Voodoo One

If you’ve followed us at all you’ll know there are two things that trigger us: first, the idea that there are “must have” bats; second, the notion that, save the hallucinogenic effects of magic mushrooms, there would never be a reason to buy a bat in the secondary market for more than it’s MSRP price.

The 2020 DeMarini Voodoo One has hit the shelves and reviews say it's good. Although hard to find, we've been told by a couple of sources the bat will continue to get released in spurts over the coming weeks. Check your favorite haunts on Tuesdays and Wednesdays for the best chance to find the size you need. Also, the hype on this bat is out of this world so we think it's not nearly as all world as some say that it is. However, the bat is a really good fit for the smaller hitter who wants a light swing, stiff feel, and max performance.

Those are really part and parcel of the same revulsion. It’s absurd to believe a bat is so good compared to its peers that, in the event it sells out, it demands a price above its original.

Our barf meter has doubled down over the last few months as supply chain issues have pushed graphic designers to work overtime producing ‘Out of Stock’ signs.

WE DO NOT recommend buying it in the secondary market for a jacked-up price. So, until then, hold tight and look at other bats like the Marucci CAT 9 Pasttime, Easton Hype, or Axe Elite. We've spent some time with the new 2022 DeMarini The Goods in BBCOR. The bat is, as expected, fantastic. We like the 2022 version of the bat as much as the 2021 (which was a lot). And we should. The bat is all but the same. They did change the endcap up a bit to be a bit more durable. But the bat still hits it very well. It is a bit on the heavier side and probably not appropriate for the 14 or 15-year-old still getting accustomed to the game's speed. But, the 16 through 18+ year old that can hit well will like the 2022 DeMarini The Goods.

Bats like the Voodoo One and The Goods have struggled to stay in stock for minutes let alone days. Luckily, as we suggested should have happened back in November, retailers began putting limits on orders for these high demand/low supply bats.

But that hasn’t stopped the onslaught.

Today you’ll struggle to find The Goods One from DeMarini and the Vandal from Victus. Rumor has it Marucci’s lines like the F5 might be next.

2022 The Goods One Piece BBCOR

Despite what you might be told, there is good news in the event you can’t find one of these ‘hot’ bats. More precisely, the bats people on mushrooms are buying are good but they aren’t unbeatable. There are more than a few bats which are readily available that compete day in and day out with the 2022 crop of disappeared bats.

The best replacement for The Goods is either the Slugger Select PWR or the TRUE HZRDUS. Both scored great in our exit speed tests, competed right in line with The Goods, have the same swing weight, and price out at least a bit better.

We don’t think any bat has quite captured the feel of the Goods. But, as we say until we are blue in the face, feel isn’t performance. Neither is sound. So, while DeMarini has dialed in an unrivaled feel and sound, it has yet to beat the BBCOR test.

If you want to try something different, then look real close at the following two bats.

Few bats compete with DeMarini's The Goods as well as the 2022 True Temper BBCOR HZRDUS. It has similar stiffness, a slight end-load, good barrel size, and excellent player feedback. The familiarity of The Goods gives it the edge in a lot of our head-to-head testing with hitters. But, no doubt, the BBCOR HZRDUS is a legit contender for the best hybrid BBCOR bat for 2022. Hitters who want a primarily stiff feel, reasonably sized barrel, and a slight end load on an alloy barrel might like the HZRDUS---maybe even better than The Goods.

The Voodoo One, Goods One, and Victus Vandal Replacement

The Voodoo One, The Goods One, and the Vicuts Vandal are all single-piece alloy bats with a light wing. There are more than a few very similar bats that you can find on the cheap and that will perform as well as any Voodoo One—regardless of what some tell you. There are a lot of options in the light swinging BBCOR space even with these three juggernauts very hard to find in stock.

If it were us, and we were swinging a 32-inch bat or shorter, we’d start with the Omaha. The bigger sizes swing heavy, but the dynamic swing weight in the Omaha line makes for some light swinging 29 through 32-inch sticks.

The 2022 Louisville Slugger BBCOR Omaha bat is a single-piece alloy bat with a big barrel and stiff feel. The bat has been around forever and is still a favorite of many college-level players. For the 33 and 34-inch sizes, the bat has a heavy swing weight on purpose. The 29 through 32-inch versions use a lighter swing weight. It is only available on Slugger's site directly, but it is worth a swing.

Another gem is the 2022 Solo. In fact, any year will work. Although the barrel profile is small it isn’t any smaller than the Voodoo One and our exit speeds always put the Solo up top.

The 2022 Louisville Slugger Solo in BBCOR is a single piece bat with a light swing and reasonably sized barrel. We think it feels and performs much like the 2022 Voodoo One which gets, for any number of hype level reason, way more pub in the social fear. It sounds duller than the Voodoo One, but it definitely hits the ball just as hard. The Solo in BBCOR hasn't changed much since its release in 2016/17, but it still packs a punch and is a great fit for the kid for one of the lightesting swinging single piece alloy bats on the market. 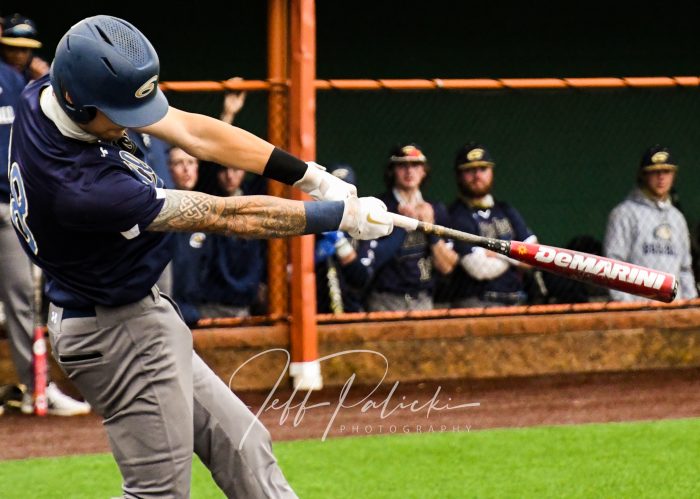