CF Zens and the Art of Tinfoil Hats: The 2021 Perfect Game Bat Ban

What an exciting day in Bat Land.

It’s been a while since a bat ban has taken place with such a harsh, polarizing social media response.

If there’s one thing I’ve learned in 2020, it’s that there are 16 sides to every story, and everybody thinks they know the answer. I surely don’t (ask my wife), but I think it’s worth fleshing out some facts and some things that might make you think a little deeper about all this.

I’ll wait for you to go into the kitchen and make yourself a tinfoil hat. Reynold’s Wrap is best. I buy it by the football-field-sized sheet at Costco.

Let’s start with the facts.

As of early Wednesday (December 2), an updated PG list of banned bats emerged on social media for what appeared to be a 2021 summer tourney. You can find it here. So, certain O.G. USSSA Bats were banned years after their brothers and sisters were knocked off.

There was no press release nor any discussion of bat testing failures. Then, at approximately 7 PM EST on December 2, Perfect Game posted this to their social media pages: 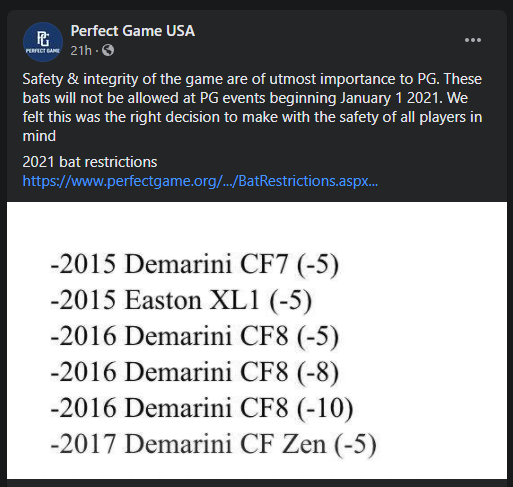 “Safety & integrity of the game are of utmost importance to PG. These bats will not be allowed at PG events beginning January 1, 2021. We felt this was the right decision to make with the safety of all players in mind.”

Per Obi-Wan Kenobi, “now that’s a name I’ve not heard in a long time” — (since the August 2015 press release switching to the USA Bat standard).

Don’t get me started on the word “integrity.”

Now, the term “safety” was used, which is different from what USA Baseball officially said. We all know that safety was the issue behind the USA Bat mandate, but USA would not go that far. Now someone drew the safety card in the open. Interesting.

And why give anyone a chance you use them in December 2020?

Why not a press release as soon as the ban occurred?

Before we discuss some theories, let’s address the elephant in the room.

All-day, there’s been a massive back-and-forth between those who own some of these bats and those who hate them. Let’s not kid ourselves. There’s a big case of the have and have nots. Many have nots are haters, or their teams got “beat” by these bats. Let’s be honest, folks. Before you smash a person who wants to sell a bat, know that PG is NOT the governing body of youth baseball. In fact, youth baseball has been sorely lacking in any unified youth regulations or any governing body for decades. So for everyone who wants to knight PG as the determining factor of reselling 2017 drop 5 bat value, there are 17 other leagues and tournaments that will allow these bats. Just be honest in your assessment of how you feel about these bats. You will see them again. I know haters gonna hate, but haters need to know the facts.

Now let’s put on our tinfoil hats and explore various theories, so we get them all out on the table in one place.

Nah. If this were true, these bats would have been banned years ago, and they would not have been allowed to be used as of today. We’re not talking about the latest bat from 2020. We’re talking about bats that are almost 6 or 7 years old. So respectfully, say what you want, but it doesn’t really seem to make sense to grandfather out potentially “unsafe” bats. Once you add safety to the “integrity stew,” it changes things, in my opinion. But hey, who cares what I think? (again, ask my wife). There’s more to this.

Outside influences like D1 schools were tired of extending offers to 8-9th graders based on kids who all use the same bat at the same tourneys. Then 3 years later, they are maxing out at 78 mph with BBCOR.

First off, I will never know what goes on behind closed doors at-bat manufacturers. What I do know is that it’s a $700M+ super competitive industry. I don’t need to tell you that there are things that happen that we won’t ever know about.

So let’s take a more practical approach. Bats from 2015-2017 provide no financial incentive to DeMarini or Easton because they collect nothing on the secondary market other than nostalgic name recognition. It’s those who resell bats that obtain the financial gain. Due to GOAT status, those bats will be used until they literally break on the field.

Unless someone forces them to stop using them 6-7 years later. (Dun Dun Dun)

Will bat manufacturers really care in 2021 if their models from years ago are banned?

Will that force folks to buy newer models?

Would it be beneficial for bat manufactures to market these newer models to be as good as GOATS?

Does it make sense to release this right before the holiday shopping rush? Silly rabbit.

Call me crazy, but in a down market, any ability to increase sales will be considered. If that forces a company to join the dark side (cough cough adding 1 Easton XL1) and cannibalize old inventory for the greater economic good, would you do it?

Your hat just fell off. I saw it.

Theory #4 / USSSA and “Everyone Else” Is Going to Follow Suit

That doesn’t check out. Tony Harper, Manager of Baseball Operations had this to say about any future bat bans:

As well, USSSA only bans bats that don’t pass the test. And these newly added bats to the PG-only ban list once passed the USSSA test.  As much as some think they should not have, they did.

Bats aren’t banned by overconfident dads sitting in the bleachers trying to explain away their son’s ERA. How are they banned by PG officials with such confidence? And who is to say they got them all? The 1.15 Stamp is a scientific result from a scientific test. A test the Perfect Game doesn’t run by themselves.

It doesn’t make any sense considering that there has not been a bat ban this long after a release ever (other than non-sanctioned Cooperstown figuring out Orange Stealths are not a good idea for kids). To do this, USSSA would be saying that their protocols to allow these bats to slip through years ago was a massive mistake years ago.

Because it would affect the – wait for it – the integrity of the testing. Zing.

If NOT banning the bats increased your play for certain areas of the country, that’s a win-win.

Might the new 1.15 stamp be a set up to weed out those bats out down the road eventually? We’re going to have to stay tuned on that.

In the end, most of us will never know what actually happened, why it happened, what discussions were had, if any severe injuries occurred, who complained, what influences were involved and what deals were made. So until that time comes, when there’s full disclosure on all this, save your hat for my next installment. (Maybe we can talk about how much bat tampering will increase now). 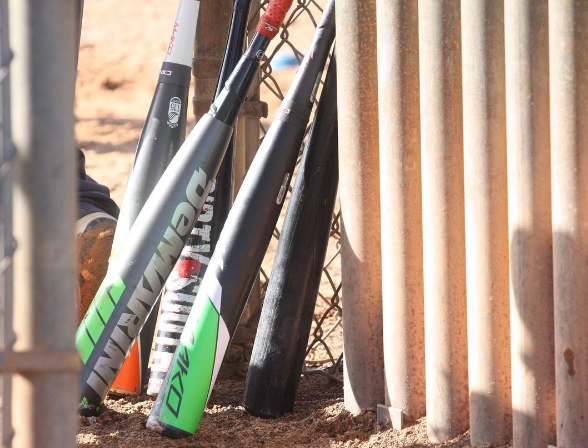