Marucci, in partnership with Diamond Kinetics, released a “Smart Bat.” This is a Marucci maple wood bat with a hole bored in the knob, allowing for placement of the DK swing sensor that comes with the bat. The bat is an approved wood bat.

How is it different than other smart bats?

With the bat release, Marucci released an IOS app that has swing instructions from MLB players. The bat comes in both an adult and youth version and gives players and parents another avenue to deliver real bat and swing performance metrics to a smartphone. Below we give some insight on the history of smart bats, as well as source references to articles for those in the market. This serves as our Marucci Smart Bat review.

On this site, you may find both our Marucci Wood Bats as well as our Diamond Kinetics Review worth your while. You can also see our first Smart Bat Review—which is a stroll down memory lane for where the ideas started.

Off this site, Zepp Labs and Diamond Kinetics reviews on Amazon are usually a good read. Additionally, Marucci’s new smart bat landing page is worth a look too.

The idea of a smart bat has been floated around for a good two years in the industry. Two years ago RIP-IT intended to create the hardware of a bat that could deliver swing metrics to an interface where developers could design games and swing catalogs. It was well before its time and the Kickstarter campaign was never fully funded. RIP-It abandoned the idea and the bat game altogether.

Last year, Old Hickory produced a wood bat with a hole bored into the knob of the bat. In this hole sat the Zepp sensor. The idea was for a seamless transition between sensor and bat that came together in a more cost-effective manner. The Sensor itself was usually $149. Getting an Old Hickory bat in addition to the sensor for about the same price appeared to be a smart play.

But in truth, the idea never took off. It even appears, as of today, that Smart Bat is no longer produced by Old Hickory. Their site has a landing page, but it is blank. Amazon does not sell the bat and only a few discounted models remain at ***’s Sporting Goods.

That bleak scene makes the Marucci partnership with DK and the production of a “smart bat” a bit of a head-scratcher. What might Marucci see in the DK sensor that makes it a useful product? How will this bat be different from the Old Hickory & Zepp sensor combo?

In terms of specs, the Marucci/DK smart bat is the typical Marucci Maple handcrafted bat. The adult version of the bat is a drop 2. That is, the numerical difference between the length of the bat in inches and the weight of the bat in ounces is 2. Marucci’s smart adult bat comes in lengths from 31 to 34 inches.

Both the adult and youth versions of the bat have a hole bored into the knob. This hole fits the Diamond Kinetics Sensor. We discuss the DK sensor at length in our Diamond Kinetics Review. It has some unique features in comparison to the Zepp Lab and Blast Motion sensors.

If you can buy the Diamond Kinetics Sensor independently, and it can be transferred among different bats, why would anyone buy it attached solely to a Marucci bat that is not necessarily the best game bat for you?

There are some answers to this. But, to be fair, our first recommendation is this: the DK Sensor works independently of any bat. The fact it is put on a Marucci wood bat seems intelligent if this is the exact wood bat you want (a Drop 2 handcrafted Maple Marucci or a drop 4 youth wood bat). Otherwise, it may be a smarter buy to simply buy the DK sensor and then use its mounting system on any Marucci bat of your choice. Like, for example, the CAT 7.

One reason to go the Smart Bat route is the access you gain to the Marucci App that connects to the Smart Bat sensor. Swing training and insights from some of the best, including Buster Posey, can be found on that app.

In terms of economy, you can buy the entire DK/Marucci Smart bat set up at release for $179. The Sensor is $149 if you were to buy it by itself. That means you are getting a Marucci Handcrafted Maple bat for $30. Hard to beat that.

In that same vein, the DK sensor does not know what bat it is tied onto. Even if you bought the DK/Marucci set up, you could probably attach it to another bat. Or, at least,  you might find a way to buy the DK mounting system setup and use the sensor and app on the bat of your choice. We have yet to try this and are nto sure if you could get it to work. But we would be hopeful it might work.

Below is Marucci and Diamond Kinetics’ press release on the matter. These are always fun to read.

BATON ROUGE, La./PITTSBURGH – In a collaborative effort spearheaded by the ever-increasing demand for data and ‘smart’ technology within the game of baseball, Marucci Sports and Diamond Kinetics today introduced the Smart Bat Custom Cut – a revolutionary, new bat design that places Diamond Kinetics’ SwingTracker® sensor inside the knob of handcrafted maple bats from Marucci.

With a cutting-edge design that incorporates Diamond Kinetics’ SwingTracker software platform into a single, all-encompassing piece of ‘smart’ equipment, the Smart Bat represents the new standard by which baseball swing data will be collected, delivered and analyzed.

The seamless integration uses a dual-locking mechanism to hold the Diamond Kinetics’ SwingTracker sensor safely and firmly in the knob of the Marucci bat, while also allowing for easy and safe removal to charge.  The Smart Bat uses DK’s latest sensor which includes a higher specification accelerometer and gyroscope that has two times the sensing range of the previous sensor.

“Smart Bat is another step toward unlocking the power of information, in a seamless user experience, to help players improve their skills and advance their level of performance” said Diamond Kinetics CEO C.J. Handron

In conjunction with Smart Bat, Marucci will also debut its first ever mobile application for iOS devices. The app – designed and engineered in collaboration with Diamond Kinetics – will feature exclusive content from Buster Posey, Anthony Rizzo and other Marucci partners, as well as a direct connection into the SwingTracker mobile app.

Furthermore, the Marucci app will be part of a connected family of Diamond Kinetics and partner apps to give the Smart Bat user the ultimate swing, data and instructional platform upon which to develop their skills.

Dedication to quality and an understanding of players’ needs has taken Marucci Sports from a backyard shed in Baton Rouge to the No. 1 bat in Big League baseball. Founded in 2004 by two former professional baseball players and their athletic trainer, Marucci prides itself on being founded, majority owned, and operated by Big Leaguers. Current and former Big League partners include Albert Pujols, Anthony Rizzo, Buster Posey, David Ortiz and Jose Bautista, and other players who advise, test, and approve Marucci’s full line of elite baseball and softball products before going to market.

Building on academically validated scientific research at the University of Michigan and the University of Pittsburgh, Diamond Kinetics has an exclusive license for the application of IMU sensors in baseball and softball. 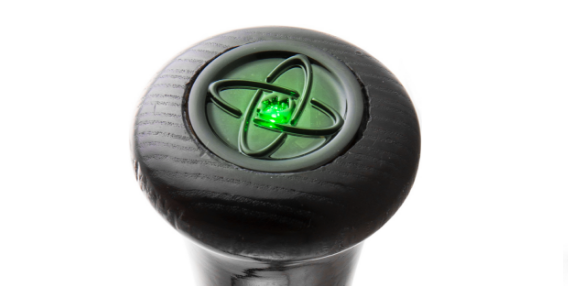