We track the Little League World Series bat usage yearly at the regionals. Our findings are reported here.

For 2022, we watched 75% of all regional LLWS games on the family of ESPN channels. While watching, we track bat usage. We are adept at recognizing bats and can quickly move through a lineup. However, Little League rules for pinch hitters and the number of rainouts not lining up precisely with our DVRs recording times make it difficult to always see the first nine batters in a lineup. To simplify our process, we spreadsheet captured the first nine batters for each team found on the recorded broadcast regardless of when the recording started. We believe this gives us the most efficient way to capture the actual bat usage among teams throughout the country.

See More Details on Our Research

For the national tournament you find at Williamsport on ESPN (and their family of channels), Easton is a serious sponsor. They give each of the players a new Easton Bat. There is no requirement the kids use these bats, but it is highly encouraged, and these boys are given the red carpet treatment. 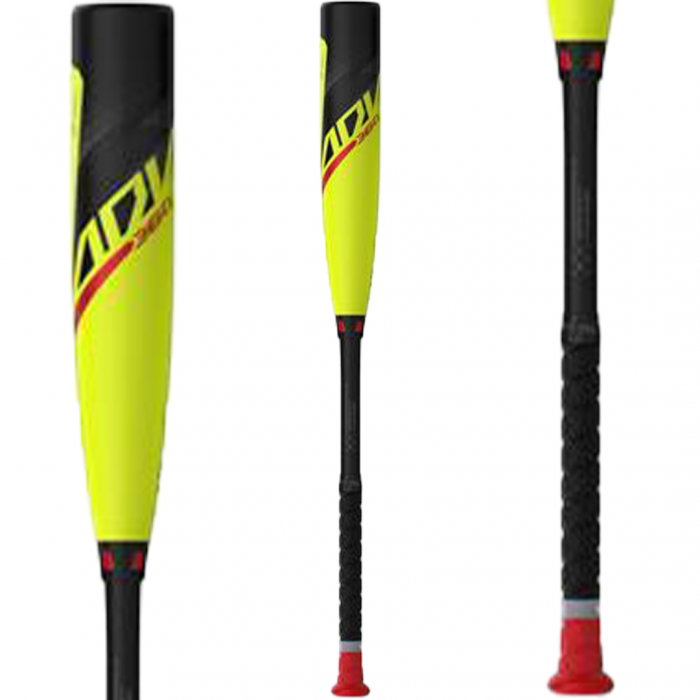 Tracking the usage at the actual Williamsport series is not as indicative as the USA market share because Easton’s sponsorship skews the numbers. We only report bat usage rates at the regional LLWS tournaments.

After watching over 360 at-bats during the regionals, Easton continues to lead the pack in brand usage. Easton is followed closely by Slugger and DeMarini. It is shocking how poorly Rawlings performs (more on that later). Marucci is also well below its average uptake in USSSA and BBCOR. But we were also happy to see Axe, True Temper, and DSB in the mix. Even a couple of Warstic bats (the Bonesaber) made it too. 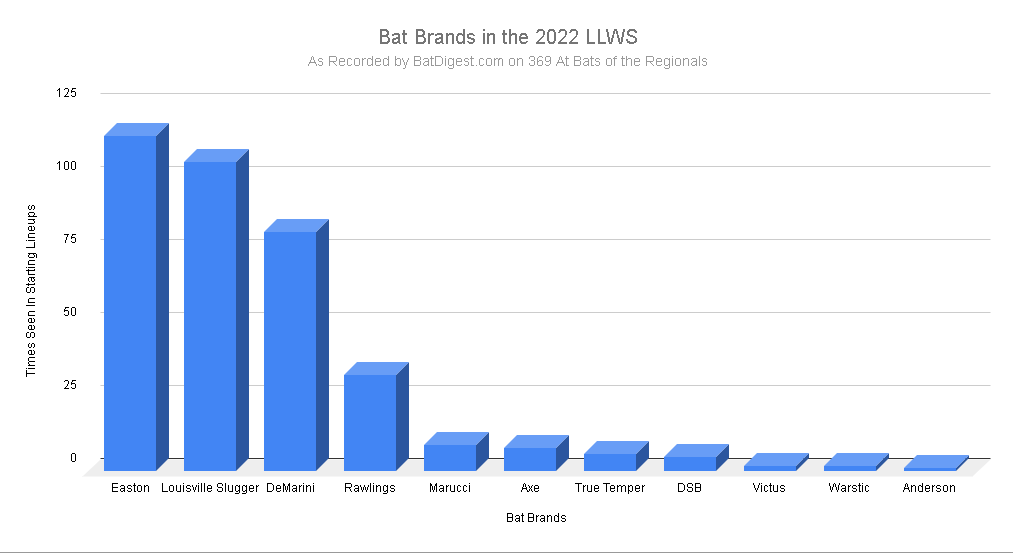 We can further dive into brand and color-code the bars by year, and we do so in the chart below.

If you think of each color code as a race to who had done best, you’ll see that both Rawlings and Easton led the pack in 2018, the first year of USA Bats. For 2019, Slugger came on strong. From the years 2020 to the current, Rawlings has, to put it flatly, crapped the bed. If any company has mismanaged the pandemic any worse than Rawlings, we have yet to see it.

Three companies the world has yet really hear about (Axe, True Temper, and DSB) have outperformed Rawlings in USA baseball in the last 2+ years.

If we combine and compare models, regardless of year, we get the chart below. In short, the ‘winner’ is Easton’s ADV 360. There are almost twice as many ADV 360s as any other. But, the Prime from Slugger and CF from DeMarini has done measurably well.

The biggest surprise for us while watching hundreds of at-bats for the 2022 LLWS was 2022 The Goods One. It is the 5th most used bat in the series and is the most used single-piece alloy–all the bats ‘ahead’ of it are several dollars more expensive.

We were amazed at how many kids were still swinging the Slugger Prime. It is an even mix of 2019, 2021, and 2022 Slugger Primes—making it the second most used model line in the Little League World Series.

What a remarkable fall from grace the 2022 Rawlings Quatro Pro has performed. It was the leading, albeit fragile, bat in 2018. It showed strong in 2019 and is now outperformed by bats from companies a tiny fraction of its size. The 2021 and 2022 versions of the Quatro are a disaster; anyone who has hit them knows it too.

Axe has long wanted to break into the USA ranks. (Any ranks, really). And although the Strato has only been available for a few weeks, it has convinced more than a couple of teams across the country to break it out. This single-piece alloy with a light swing and a shaped handle might be on to something.

Below is our data collection and report from the 2019 Little League World Series bat lineups. Here are a few things we learned.

Notes on the Graphic Above

Roster Changes: If you watch the LLWS, you know that roster moves/changes are almost untraceable. Pinch hitters, notable runners, and lineup changes are plentiful. These rules are suitable for the game but bad when tracking what ‘starter’ uses what bat. When there are 15 players on the roster constantly moving in and out of the 9-person lineup, then making a list of the “top 9” is just making a list of the first 9—not necessarily the starters. That is what we did. This graphic represents the first nine televised on ESPN of each team.

Bat Changes: We watched many of the non-championship games and tracked bats. Surprisingly, at least to us, many of the players changed bats for their championship games. One particular example is we saw a player hit with a Dirty South Made bat in an elimination game only to see him use the Quatro Pro in the championship. So, sadly we think DSB is not represented in the graphic, although they were represented at the tournament. We give them a backlink here in homage to their breaking into the big dance and as a consolation prize for not making the graphic.

The most popular 2019 LLWS USA Bat

The 2019 Rawlings Quatro Pro in the USA is the most popular bat in the LLWS regionals. The second place is the previous year’s version of the bat called the Rawlings Quatro. A decisive third is the Louisville Slugger’s 718 Select.

We did something similar with the 2022 College World Series Bats.

Easton sponsors the Little League World Series finals in Williamsport. They do NOT specifically sponsor the Regionals. As such, we think tracking bat usage at the Regionals reasonably indicates USA bat usage throughout the country without the direct bias of sponsorship.

Little League World Series bat rules require a hitter to use what is referred to as a USA Bat. USA Bats is a bat certified by USA Baseball by meeting specific qualifications, including a barrel diameter no greater than 2 5/8″ and a limited barrel performance akin to wood. 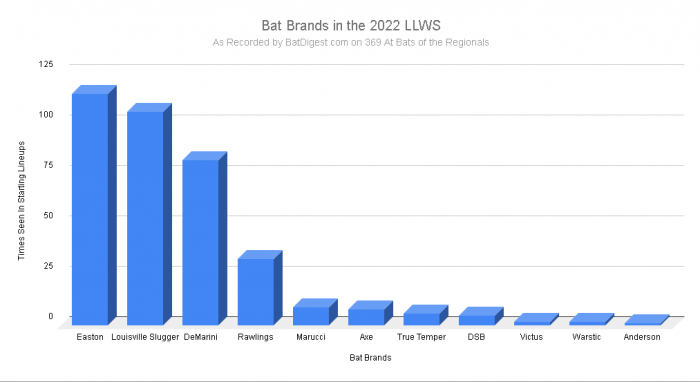