Little League Age Chart for 2020 (and 2019) follows. These cut-off age rules affect players born in August of 2002. Those born before are no longer eligible for “Little League” as they are too old.

Not all little leagues follow the same age rules as Little League. (Notice the capitalization). Little League, properly known, is a formal, nationally recognized league that controls a good swatch of the recreational, neighborhood baseball-type leagues worldwide. But, their rules might not be the ones your local league abides by. If those leagues have different age cutoff dates, then you’d do better to ask them.

Yes. Well, there were age rule changes. 2018 was the last year a previous May 1 cutoff date was grandfathered for some leagues. Now, September 1st is the new cutoff date for (capital) Little League. Going forward, there are no expectations the birthday or cutoffs (September 1st) will change.

The little league baseball age chart for 2020 looks like the one from 2019. From 2019 and beyond is the same (remove, of course, one year) age cut-offs are used to determine the right league by month and birthday. The cutoff date change that occurred, and has been grandfathered in the last several years, no longer affects current players.

As such, the following chart will show you the birth years and months that coincide with the correct age division. For example, the chart shows a person born in September of 2005 will be in the 14U division Little League season 2020.

*The 12U 2018 season is the last year and age class (2005 Birthdays) to allow the May 1st birthday ballplayers. Come 2018 and beyond, all leagues and ages will use September 1st.

These charts are published on Little League’s website. We cropped them from the PDF and put them here. They are at least slightly confusing, especially the 2018 season, where the change in little league cutoff dates is affected.

But, once you get the hang of them, they are easy enough. Find the month your child was born and follow it down to the year they were born. Once your cell is found, the far right column is the lowest age division your child can play in.

This 2019 Little League Age Chart shows the division a player can play in based on their birth year and month for the 2019 Season. Most 2019 seasons start officially in September of 2018. This 2018 Little League Age Chart shows the division a player can play in based on their birth year and month for the 2019 Season.

The major hullabaloo that sent many to the internet scrambling for answers was the change in Little League international’s cutoff date. We discuss the reasons and history behind that here. 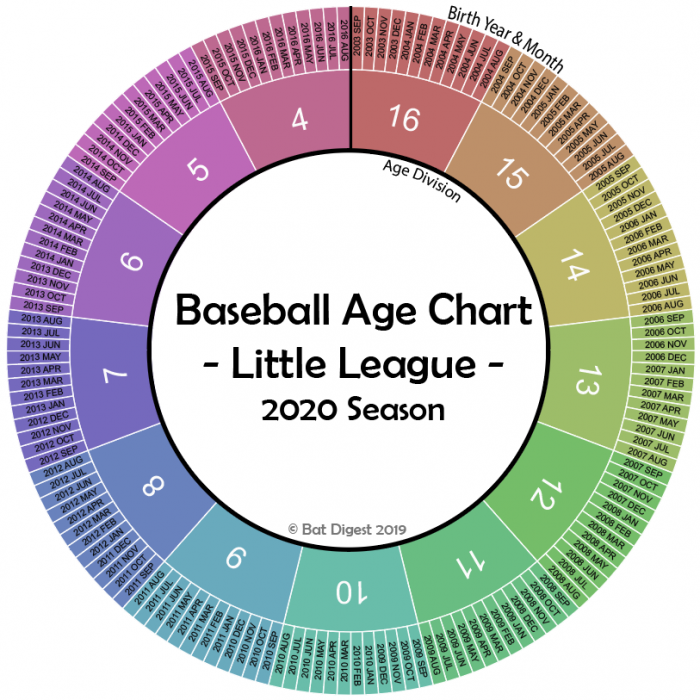 Wanting to know the cut off date to play little league baseball for 2020 season?

And why if so.Say you just turn 12 after the season is over so you wouldn’t be 13 until after the next season.so still no 13 year old would be playing on a little league field

That is so true. The kids that where born August 20 to 31 get punished and told there too old but the kid that was born on September 1st is perfect

Should be eligible until day they turn 13.

Big mistake. Why the age cut changed? My Kid turns 11 on June 2020, and chats the end of the season and with this new rule he has to face potchers with 12 years he only having 10. Moving to American Congress to not frustrate my son.

My son is August 16th 2007 and going into 6th grade, we should be able to get a waiver for him

The cut off date should be August 1st, it was that date for many years and it worked great. It should have never been changed in the first place, May first was a joke.

That’s because LL is a business. They don’t actually care about the kids. This age change is all about the LL World Series. They got blasted for having 13 years old playing last year. So in order to make things right, they are willing to screw over a whole country of kids who won’t get to play another year just to hold their precious travel ball tournament. My kid is one of the victims. He is a August 28 birthday. He will never be the age of the league he is forced to play in. He was 11 all this season, but counted as a 12 year old. Next year? They say too old now. But a kid the year before got a 5th(!) year of LL because they wanted to “grandfather” those kids in to the age change.

My son’s birthday is 8/28 also. He is 12 today. We’re coming back to little league for the fall season this year after a few years off and I’m trying to understand where he will be playing. Does fall ball use the 2020 league age to determine this? Basically, I’m wanting to know if he’s moving up to the big senior field or if he’ll get one more season on the smaller major field.

No one may turn 13 before September 1st in the Major division end of story.

My 11yr old son is in the same boat. He was born on Aug 20th and is considered league age 12 next season even though he will not be 12 at any point of the season. This is so stupid since it starts being a bigger disadvantage as he moves up in division. We planned for my son to stay with the league at least until Juniors like his older brother but now with the rule change next year will be his last year and then full travel so he can play with kids his actual age. Big reason why LL will be losing more and more players to Travel Baseball which we are seeing first hand in our local Little League.

The same is too be said for my son. His birthday is August 31st at 11:58 PM! He would have been the starting pitcher this past season in the AAA, but was forced to move up to majors because he was considered league age 10, even though he didn’t even turn 10 until after the season was over!! Then instead of being a starting pitcher he sat on the bench and watched as all of the 5th, 6th, and 7th grade pitchers played in rotation. He threw for only a few innings for only a hand full of games against boys older, bigger, and stronger than him and this was a complete disservice to his development. He truly was the youngest, and smallest player in the majors division. Noah Synderguaard got the extra bonus with an August 29th birthday and look where it got him. Just sayin’ 😉

Same boat, my twin boys were born three weeks early, that’s screwing them out of a lot of things. They will never be 13 during the season. Just 12!! Seems like they just could have said if you turn 13 during the season you can’t play. The that is to simple, and intelligent for those idiots to figure out.

Baseball is a spring and summer sport for kids since these 12 year olds can’t play the seasons as 12 year olds maybe change little league to winter let em ski to first. Rules people us parents can’t help it if your kid is 12 and still on the bench maybe y’all need to quit making stupid rule changes and maybe go out and play or ask some of the kids opinoins

So sad that a ball player has played with his peers since t ball . Players are 12 years years old more than half a year some 8 months out of the year and are denied y’all need to make the cutoff Jan 1 or make it so that if a 12 year old is 12 more than half the year he is eligible for 12 u or maybe get the world to just do away with a kid being 12 and just go straight from 11 to 13

It should be if a kid is 12 for more than half of the year he is eligible. Far as the money aspect y’all are losing money. Kids don’t wanna play with peers they have not grown up playing with since tball .Some communities don’t even play 13 and 14 when they get to this age it’s called middle school. Communities and parents need to start there own little leagues and do away with there rules because they are going keep changing there rules .