A few years ago we discussed the effect of BBCOR bats on offensive performance. We found, as many did, the implementation of BBCOR standards pushed offensive performance to all time lows. We were not the only ones to notice. Starting in the 2015 season, the NCAA attempted to rectify this by using baseballs with lower seams. The idea was, and they confirmed this in a laboratory, flatter seams result in baseballs with less air drag that can fly further. It began the Flat Seam vs Raised Seam debate.

Some recent analysis, that we overview here, proves once again that baseball shouldn’t be played in a laboratory. Indeed, aggregated statistics in the post-raised-seam-era show offensive statistics with no real positive bump. If anything, the flatter seam gave NCAA Div I pitchers the highest strike out per nine innings on record. Ironically, NCAA’s laboratory applications meant to improve the flight of an offensively hit baseball may have done the opposite. 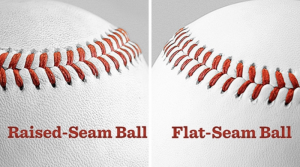 When we originally sat down to write this article, we searched far and wide for a similar analysis. After some looking, we found significant work done by Dan Russell—who has contributed a considerable amount of effort into a baseball bat analysis. Instead of re-formulating the charts, we simply link to his work in the charts he created.  His work should be considered a primary source on this topic. Each chart below links you to his commentary as well. You can also find some of this data in table form on the NCAA’s site here. 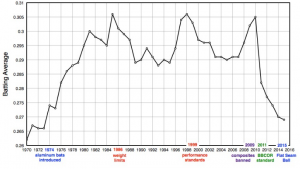 Post flat seam batting average hasn’t moved at all. It’s a far cry from the peak performances in bat technology before weight requirements and composite restrictions. The average MLB batting statistics are between .260 and .275. 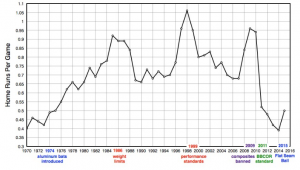 Home Runs saw a small blip increase after the flat seam. However, even at .5 home runs per game, it is a far, far cry from MLB standards. Few teams post home runs per game below .75 and good teams get close to 2. (see results). 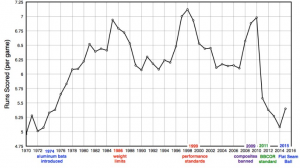 Runs per game improved slightly, but on average it’s hard to say the flat seamed ball improved them. At 5.5 average runs scored per game, it ranks out on the top end of any MLB team in history. As we discussed last year, this can be attributed to the greater propensity for errors in the college game. 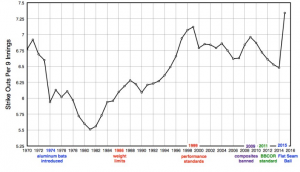 Nearly 7.5 strike outs per game make the post raised seam era the highest on record. Does a flat seamed baseball not only fly further, but also become more difficult to hit? A few more years of data will be helpful to see the trend, but this doesn’t bode well for those who suggested offensive performance would increase with a flatter seam. 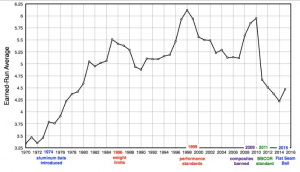 Like most of these statistics, the flat seamed ball saw a positive correlation with only slightly better offensive statistics. ERA also went in the hitter’s direction, but not by any considerable amount. In fact, the BBCOR era itself has seen worse ERA than the most previous year, despite a difference in seam height.

It is likely too early to make any sweeping claims on the offensive effectiveness of a flatter seamed baseball. With that in mind, we think it clearly falls short of wild success in terms of ramping up offensive production by lengthening ball flight without the added initial batted ball speed. The most strike outs per game in NCAA DIV I history is at least a slight bit concerning in terms of offensive production. 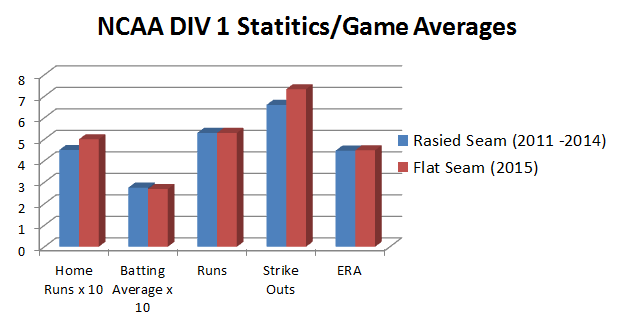