So you’re trying to decide between a Ferrari and a Lamborghini? That’s a difficult decision. The Easton Ghost X and the DeMarini CF Zen are the top of the line bats and their price tags reflect it. Of course, when we are spending that kind of money on a bat we want to make sure we are getting what we pay for. In our Easton Ghost X vs DeMarini CF Zen article we break down our experience and some keys to helping you make a decision.

The Ghost X is the next up in Easton’s stellar line up of bats, following last year’s widely successful Mako Beast. This is, like the CF Zen, a two piece composite bat. Easton claims it uses a unique process in the connective piece to help dampen sting. In terms of what it has OVER the CF Zen:

The major advantage, as we see it, for the Easton Ghost X is the available size options. In USA Bats, for example, Easton has several more sizes than the Zen which only comes (for 2018 at least) in a drop 10. Of course both lines have a BBCOR version, but the Ghost X has more drops than the CF Zen in the 2018 USSSA too.

The CF Zen is a continuation of DeMarini’s popular CF series that are known to be some of the hottest bats on the market. Like the Easton Ghost X, the CF Zen is a balanced two piece composite bat. As we see it, the major advantages the CF Zen has over the Ghost X are:

Although both of the above ‘advantages’ found in the CF Zen are subjective (that is, they can’t be measured perfectly) we feel confident the first one, better feel on mishits, gives it generally higher ratings especially in the USA and USSSA space.

Editor’s Note: The following head to head competition of one of our JBR writers’ players compares a 31 inch Easton Ghost X USSSA to a 30 Inch CF Zen in the USSSA market. Clearly, comparing exit speed metrics with a different sized bat does not make much empirical sense. But, in terms of overall feel, the insight of a real coaching dad and his real playing son can be useful for your decision, too. Reading more into the data than is actually there is a mistake. If you want more objective measurements you may appropriate our exit speed testswrite up as well as our barrel size comparison too.

The Ghost X we tested is a USSSA version, 31 inches long and 21 ounces with a 2 3/4″ barrel. At the time of testing it has about 300 swings, mostly from an above average sized 11 year old, mostly tee work with some front toss and batting practice. The bat shows no sign of spiraling or webbing.

The CF Zen we tested is a USSSA version, 30 inches long and 20 ounces with a 2 3/4″ barrel in the balanced version. The Zen has about 500 swings at the time of testing with a mix of tee work, front toss, and batting practice. Though the bat shows signs of use there is still no sign of webbing or spiraling. Blast Motion is a device you put on the end of a bat’s knob to measure different metrics of a bat’s swing shortly before, during and shortly after contact.

For our bat testing we used a combination of a Blast Motion bat sensor and Blast Vision app. We hit off a tee, switching bats after around 50 swings. Even though the bats are different lengths and weights and will skew the numbers slightly, we think it’s more like comparing Granny Smith apples to Red Delicious apples than apples to oranges. We also used our own experience and feedback for the testing.

Using the Blast Motion bat sensor and the new Blast Vision app we were able to gather evidence on the performance of both the DeMarini CF Zen and the Easton Ghost X. Using Blast Vision his average exit velocity was 66 mph with a max of 73 mph. The average distance the ball was hit was 127 feet with a high of 210 feet.

So, what does all this tell us? That both bats are very good! Our 11 year old hitter was able to generate slightly more power according to the Blast Motion with the Ghost X. We believe those results are most likely the result of the difference between the two bats’ lengths and weights. As he was able to swing both at roughly the same speed with similar hand speed and time to contact, the difference in kilowatt power and blast factor is likely a direct result of more weight behind the swing.

We did notice that the CF Zen had less hand sting on miss hits than the Ghost X, but the Ghost was still pretty forgiving. The barrel on the Ghost X is sightly bigger, offering a little more sweet spot. The CF Zen seemed to be hotter out of the wrapper and the Ghost needed more break in time, not unusual for Easton bats. It’s difficult to say right now, but in the past our experience has shown Easton bats have been more durable than DeMarini. The price point on both of the bats are identical with a $350 price tag from the manufacturers.

Our 11 year old hitter likes both bats quite a bit, but when pushed he has a small preference for the Ghost X. He believes it has a better feel for him and he hits it better when swinging correctly. You will have to decide for yourself what aspects you’re looking for most – faster break in time, more durability, or bigger sweet spot. Which ever decision you make, we are sure you’ll be happy with the performance of the bat. 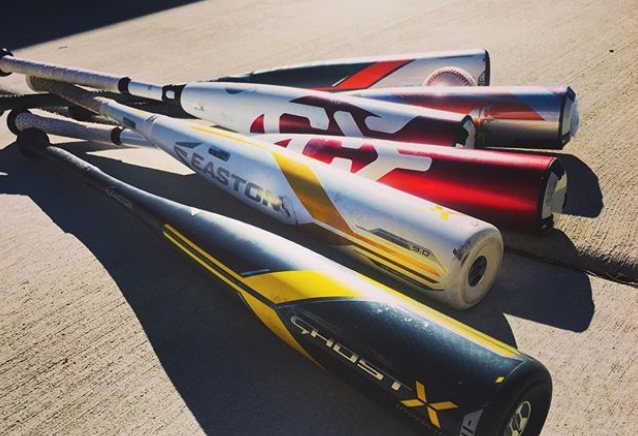