Last weekend at a game, it was 38 degrees here in Northwest Ohio or as we call it “the start of Spring baseball.” As we remember and learn every year, it is going to be cold the first month or so of our season. With the cold weather comes the need to alloy bats to remain totally un-phased by the cold weather in terms of hitting. Cold weather just lends to less than stellar performance out of a composite bat.

Take a look at an article about why you need more than one bat in your bag throughout the season.

Most of our players have a non-composite bat to use when the weather is cold (we actually recommend it). The real question that popped in my head was, which of the alloy bats we have are the best. The answer I found out is that it really depends. Today I am going to focus on three bats that I feel are truly the top of the line in terms of alloy and some of the feedback we have gotten back from our players over the past few weeks of games.

Before we go on with the perspectives, I will let you know about the players. There are always questions about what bat for what size player. Here is the layout for the 11 year old players swinging the alloy battle-sticks:

Let’s start with the Marucci Cat 7 as the first bat being used. Player 1 (who actually owns the bat) loves swinging the Cat 7. Being a contact hitter, the pop in this bat gives him a little extra drive in his hits, which is nice. He stated that even though it is a heavier bat than his other bats, it feels amazingly light and balanced. He has tried a composite -8 before and felt it was much too heavy and had problems getting it through the zone on faster pitchers. This was not the case with the Cat 7. I think he will be using this bat for most of the season, even when the weather turns toward warmer times.

Player 2’s impression of that bat is that it is pretty nice, but it almost feels too light for him. He mentioned that it did feel light for the -8 size, but he likes a bat that feels more “solid” like an Easton or Louisville Slugger (which he owns). He did try to use it for an at-bat, but immediately said its light weight feel messed up his timing, so he went back to his other bat.

Player 3 took some warm-up swings with the Cat 7, said it felt nice, but way too light for him to use in the game.

I think the Cat 7 is a great bat.  It feels much lighter than advertised and is extremely well balanced unlike many other bats claim.  I think this bat is a great way to start the journey of a player away from the traditional -10 as they approach the age of 10 or 11 years old.  The Cat 7 has one of the loudest pings you will ever hear come out of a bat.  It is definitely a head turner when the ball gets crushed!

The Louisville Slugger Solo 618 was a recent acquisition to one of our hitters.  Player 2 (who owns this bat) absolutely loves the look and the feel.  It has such a sturdy/solid feel that makes you think this bat is a BBCOR designed for the big boys, not a USSSA bat.  The player moved up from using an Easton Beast and is not looking back.  That bat out of the wrapper has excellent sound and great pop.  It is a one piece alloy, although LS claims it is a hybrid because of its composite end-cap.  The swing is really stiff, but overall a good choice.

Player 1’s impression of the Solo 618 is that the bat does feel nice, but it is a bit heavier feeling than his Cat 7.  He did admit that it might be something he could swing with a slower pitcher, but would not want to use it in a game where his at-bat was the deciding factor.

Player 3 really likes the bat, but he said that it felt a little stiff for his monstrous swing.

This bat is hot out of the wrapper.  Some of our players were in Florida this past Winter for all-star games and many of the kids were using the Solo 618, even in the warm Florida sun!  This bat is nice and solid feeling, while being in a category of what I call durable.  What out though as it might feel overwhelming for players who don’t necessarily have the strongest swing.

The sound of this bat will confuse you at first.  Is it composite, because the sound coming off of it sure does sound like it?  This is personally one of my favorite bats that I use to hit infield and fly balls during practice.  It’s a hybrid design that allows for the player to benefit from the flex of a hybrid handled bat.  There is zero sting from this bat which is good as I have seen many rocket shots with this and the previous year’s model.  The barrel of the bat, even though 2 3/4, is not that long and might cause some miss-hits to occur during the game.

Player 1 has the opinion that the bat feels very heavy for his preferred swing.  He does love how it makes contact and has a great sound when the ball is hit, but still falls out of favor because it is a hybrid model.  The downfall of this bat, in his opinion, is that if you get jammed with a pitch, the ball just dies because it is hitting off the composite shaft, not the alloy barrel.  In a typical alloy bat, you could at least get some distance out of the hit, even if it was off the handle area.

Player 3 loves this bat.  He has a homerun swing and this bat allows for his to whip through the strike zone with great speed and the results are obvious – he hits the ball really really hard and usually pretty far.  This is a great overall bat, but we found that over the past few games there have been some small dents appear, so please be aware before you go an buy.

The DeMarini Voodoo Balanced is a great bat that gets overlooked many times for Louisville Slugger, Marucci, or Easton alloys.  DeMarini has an enormous following in the composite space, but I think this bat is an up and comer and should get more press from DeMarini as a game-changing hybrid bat that can be used year around with great results.

It’s All About the Cost and Weather

In the end, the real decision is yours.  As you can from the above real-world scenario, different bats for different kids.  It all comes down to personal preference and, of course, the cost of the bat mixed with your ability to afford it.  Overall, I think the Cat 7 is still the king of alloys bats and can be used year around without having the player carry multiple bats in their bag.  The model has been around for almost 2 years now and is proven.  I know it is going to be hard for my son (Player 1) to put down the Cat 7 once the temperatures hit composite weather here in Ohio.  Good luck this season and I hope mother nature wakes up soon and realizes its baseball season! 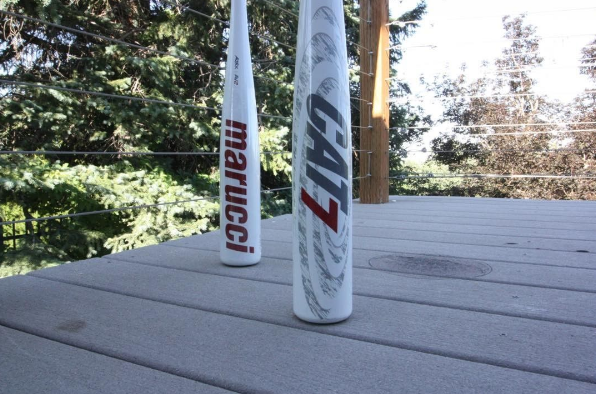