The Best DeMarini Voodoo Ever

We spent weeks scouring eBay, Sidelineswap and used good forums trying to track down every BBCOR DeMarini Voodoo ever made. They went back to 2011. Eventually, we were successful. (Although the 2019 Voodoo Insane in a 32″ eludes us still).

We acquired fourteen 32-inch DeMarini Voodoos from eBay and SidelineSwap during May and June of 2020. The bats seeded into a 14 team single-elimination tournament. We based tournament seeds by max exit velocity on three hits from a tee. These hits were performed by a 16-Year-Old soon to be Junior in High School that is 5’9″, 155 pounds.

Individual matches included three hitters hitting each bat 30 times. Hits were from a Mike MP-6 Pitching machine that had a plate speed between 40 and 60mph. The players would alternate bats every five to ten pitches until a total of 30 fair balls, and their accompanying exit speeds, were recorded on HitTrax. Players only hit the two bats in the matchup at a time. So, each session included 60 swings that induced a fair ball. Among the three hitters, each bat hit no less than 90 fair balls during each round.

Note, the bat with the highest average exit velocity through the entire 90 hits is not the one that always advanced. Instead, it was the bat that gave the most amount of players the exit speed advantage.

Although we are confident the bats which won this competition are fantastic, it is also reasonable to assume that a different set of hitters would have produced mixed results.

Consider this: the average win/loss difference was 1.2mph. Many bats advanced to the next found on a 2 – 1 count, which could have swung the other way by a sub 1mph swing. We do believe 90+ hits on each bat is a good comparison, but the best types of bats are often hitter dependent.

Although we do claim a winner in the Raw, we think every Voodoo bat is a great pick. There isn’t a single dog in a pile, and we’d recommend every single one of them.

In other words, it is not reasonable to assume the Voodoo RAW is better than every Voodoo for every player.

Although the 2016 Voodoo Raw is crowned the champion in this Voodoo Tournament, the 2013 Crimson Voodoo has plenty of data to support its dominance. Aside from the two losses to the 2016 RAW, the 2013 Voodoo lost only one player match. The 2013 swept the 2020 The Goods and the 2014 Voodoo Overlord and lost one event to the 2018 Voodoo Balanced.

Concerning the rest of the field, no bat did particularly bad. In fact, of the 38 matches required to find a champion, only seven (18%) individual matchups beat by more than 3mph average exit velo. Nineteen matchups had between a 1.0 to 3.0 mph difference. The remaining twelve, or 32% of the matchups, had a margin of difference less than one mph.

Based on exit speed margins, which were minimal in the final rounds, we think the 2018 Voodoo Balanced and 2019 Voodoo balanced we’re plenty good. Considering, too, you are more likely to find these bats in stock and reasonable shape, the 2020 and 2018 Balanced Voodoos are recommendable as the 2013 and 2016 Raw.

The Goods is a fantastic bat. Its only real problem is that it got a terrible draw in the tourney. The 2013 mowed down everyone, BUT the Voodoo Raw– and even then had a better average exit velocity on 150 hits. (See our 2020 The Goods Review. Heck, See our 2021 The Goods Review).

A solid, legit, great bat that is unbelievably underrated in the market today. This bat is a better fit, when compared to The Goods, for the vast majority of players. If you want a Voodoo with a warranty and a new life, this is it. (See our 2020 Voodoo Review).

The Voodoo Insane was the 2nd hardest bat to find in the tournament. We paid some bloke $300 (after he canceled the order for $200). It’s a great bat and took the extremely heavy 2011 Voodoo in a head to head nail biter. But, the 2018 Balanced was too much for it to handle.

Easily one of the most favorites in the tourney that is still somewhat accessible in the secondary market. This bat is all but the same as the 2019 and 2020 Voodoo Balanced and is a no brainer if you can find it for a deal.

IMPOSSIBLE TO FIND in a 32-inch. We looked everywhere and never could. Eventually, the show must go on, so we just went ahead without it.

We struggled to like this one and got beat by 2015 Overlord FT. This has the same connection piece as the RAW which eventually won—so it felt real soft on hits.

Like the balanced version of the same year, the connection piece here was harder to fall in love with. But, it was toe to toe with the 2020 Balanced.

The winner, winner, chicken dinner. The connection is real soft—meaning everything feels like a mushball. But, man, it just dropped tanks at every turn. Every hitter got some of their best speeds with this guy.

Heavy, strong, seriously fun hit. But, still, no match for the 2020 Voodoo Balanced. This is a great purchase if you can find it for a reasonable secondary market price.

Probably the biggest disappointment. It won pole position with some great tee work but got clapped by the 2016 Raw in a 9/1 upset.

We think one of the best looking bats, for sure. And it also took the 2019 Balanced to the woodshed. But, any bat that had to go head to head with the 2013 was in an unfair fight.

G.A.S.O.L.I.N.E. This is our favorite bat of the bunch in terms of straight feel, balance and performance. Sadly, it won the popular vote but not the electoral college. Hottest bat of the bunch? We’d put it up against any BBCOR bat, ever.

Weirdly good. We thought this bat was going to be absolutley terrible. But, turns out, it did as well against the RAW as any—including the Paradox, 2020 and 2013.

These bats are dirt cheap, are the heaviest swinging ones in the Voodoo line, but don’t think they aren’t good. This bat went to the wire with the 2019 Insane and had to go into tie-breaker rules to finally get put to rest. If you need a big-hitting bat, go old school with the 2011 BBCOR Voodoo.

We know of no head to head bat competition focused as much on data and results like this all-time Best Voodo tournament. As such, in terms of claiming a Voodoo is the best, we submit this model serves as the only way to be able to make a claim.

However, the tight margins across every battle don’t make the Best Voodo claim without criticism.

However, it’s useful to note the 2016 raw lost 30% of its head to head matchups. In effect, it is making it the lower performing bat 30% of the time. How can the best Voodoo of all time be the worse performing bat 1 out of 3 times? It seems like the claim of the Best Voodoo Ever is fair, but far from without criticism.

The Voodoo Has Been Good to Great for a Long Time

Another conclusion, the Voodoo has been a fantastic bat line for several years. We were most surprised at how well older bats performed. We thought, for sure, bats from 2011, 2012, and 2013 would suffer from age and a lack of performance limit matching. However, although the 2011 and 2012 lost in the first round, the battles were very close. As well, the 2013 could have won the entire thing had it got 0.2 mph more on two different hitters on the final. As well, it had the highest average exit velo in the finals. But, due to the electoral college type result, the 2016 Voodoo Raw won.

The Goods Is Good, But Has an Overrated Secondary Market Value

We purchased all 14 bats in the competition. We felt that it would allow us to be less biased in our results. We spent $510 on the DeMarini The Goods—the latest iteration of The Voodoo. It didn’t win.

Overrated doesn’t mean the bat isn’t legit. But, it is worth only a fraction of the $500+ price point the bat was demanding.

Here are the three-player cards showing The Goods’ loss.

Without a doubt, the best value in the competition was the 2013 Voodoo. At the time, we bought the bat for less than $50 on Sidelineswap.

We conclude the vast majority of old bats selling on the secondary market are going for much less than they should be. Marketing, hype, groupthink, and the belief that bats are much better than they are drive prices to ridiculous levels. We’d guess put the appraisal price of a working 2013 Voodoo (Crimson or Black) at $135 to $175.

The position in the bracket was determined by the max velocity from three tee hits.  These hits were taken by a 16-year-old soon to be Junior, who is 5’9″ about 155 pounds. Here are the results.

Commentary After the Great 8 Determined

We posted on Instagram after the final eight were determined. Here was our commentary at that time. 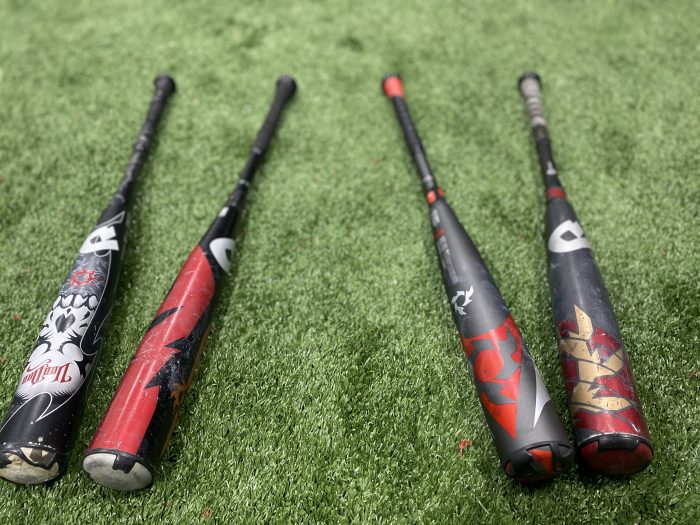 2. 2016 Raw is our hands down surprise. No@hitter has yet to prefer its feel, is sure it does worse, but it keeps on winning. We don’t remember liking that bat nearly as much when we first reviewed it back on 2015.

5. The video for this is going to take about 50 hours to put together. Ugh. Not@looking forward to that.

6. We’ll release all the data too when we’ve wrapped up this week.

As we’ve tracked thousands of hits, we know that swing weight makes a considerable contribution to actual bat exit velocity. In fact, most BBCOR bats perform well enough that the actual barrel’s performance has very little to do with actual exit speeds when compared to other BBCOR bats. But, instead, the swing weight of the bat combined with the skill of the player, are the major factors in bat performance.

The swing weights below are generated from actual DeMarini Voodoos that we purchased on secondary markets (or directly from vendors if they were in stock).

Is The Goods the Voodoo?

In the most obvious sense, the Voodoo and The Goods are not the same. They do, after all, have different names. But, in the sense that they represent the pinnacle of DeMarini’s two-piece hybrid bat line, they are indeed the same. The Goods is the child of the Voodoo in almost all respects. The connection piece is similar, it swings with the same weight and has the same barrel make up.

The bat is also made for the bigger hitting player that likes an aluminum barrel and the sense they are holding the best the industry has to offer.