The 7 Best Bat Tricks on the Internet

We won’t claim to know exactly when it started, but at spring training 2008 when Josh Womack warmed up by flipping a bat in a 360 horizontal turn mid-swing, a seed was planted in a generation of YouTubers. The search for all possible maneuvers before, during and after an attempt to swing a bat took off. Throw in the ubiquitous camera, and the list of bat tricks uploaded to YouTube any given month is staggering.

We spent more time than we’d like to admit trenching through YouTube, Vine, Twitter, Reddit, Imgur and a host of other viral sites looking for the best bat tricks to date. We can’t let this highly addicting research go to waste, so the best of the best bat tricks are presented in count down fashion below.

Number 7 goes to none other than Josh Womack who we are crediting with starting the craze. During a game in April of 2008 he grabbed a bat and did a couple warm up swings with the camera rolling. At the time, no one knew such a trick swing was possible. Consider the flood gates opened—bat tricks are everywhere.

Still, to this day, despite all derivations of this 360 practice swing, no one has quite captured Josh Womack’s smooth touch. Looks like he could do this in his sleep. See for yourself:

Johnny Burke, of Instagram and YouTube fame, took Womack’s ground work to the next level. Putting some floor routine flavor into the bat trick notion, and intending the tricks for nothing more than pure internet ‘virality’, Johnny Burke’s set of tricks have become the how-to guide of modern day bat tricks. His YouTube channel has a number different tricks and compilations of those tricks. We award this 6th place finish to his entire body of work, but show you our favorite of the Johnny Burke repertoire: the Ollie inspired Trick #3.

Since Johnny’s break through expanding the book of bat tricks, many have run with a derivation of his shtick with their stick, and the internet is now pasted with these videos and vines. Of these, we think Marisa Arriaga represents the softball bat trick as well as anyone. Her tee trick is smooth and powerful. The hacky sack drop kick at the end is as unexpected as it is jaw dropping. The video  was quickly picked up by ESPN and a hundred other outlets.

We’ve yet to reach out to our contacts at Louisville Slugger and ask if they’ve sent this young lady at least a t-shirt. The LXT Plus Fastpitch bat (which we gave an award to a few weeks back) probably got more exposure with this single video than with any previous marketing. At least send her the new 2016 version to replace the 2015 she cracks on the ground with some vigor in the clip.

Most have seen the dancing batter in the box at some Japanese high school game. The kid has a rather remarkable number of what appear to be choreographed moves, many of which amuse the opposing catcher and, if we could understand Japanese, what we think are the spectators as well.

What is lost in many of the mock ups of this video is the preamble of the original video showing the enthusiasm of high school baseball in Japan. The band is out in full force playing none other than Queen’s We Will Rock You. Worth a watch of the entire at-bat.

Had the dancer drilled some 400+ foot shot to dead center we’d have given him the top spot in this definitive list of best bat tricks. But the eventual ground out to move the runners diminishes some of the luster of his dance number.

On second thought, how could a pitcher give this verifiable goof ball enough good pitches to strike him out? This is hitter distraction at its best, and at some levels of baseball we suspect this aspiring thespian would spend his evening nursing a baseball shaped bruise on his lower back.

His pirouette around the 1:40 mark as the catcher makes a throw to second makes the watch worth it alone. The rest is just gravy.

Few bat trick choreographs capture the throw down more than this more recently viral video showing a good combination of Josh Womack’s 360, Johnny Burke’s floor work and a very smooth Samuri Sword bat flip which we’ve yet to see anywhere else. This young hitter has taken bat tricks to an entirely different level but stays true to the book of tricks of days gone by.

The number 1 bat trick is so very impressive it will, we surmise, never be recreated again. As such, we admit it’s not a trick in the traditional sense, but it is rather impressive to watch what Hunter Pence does with a baseball bat in a real MLB game. Specifically, he hits a ball three times with the same bat in the same swing and scores two runs.

There are about 80 videos on YouTube of this very hit and I’ll leave you to checking them all out. But from a pure bat performance stand point, this one shows the three hits in ex-mo better than any others we’ve seen.

Hunter Pence’s hit may not have been as intentional as Womack’s 360, Burke’s Ollie, or Arriaga’s Hacky Sack move. It may not have the enchantment of the Japanese high school baseball player or the Samuri Sword Bat Flip. But, in terms of pure impossibility? It takes the cake.

There you have it, the 7 best bat tricks on the internet. Don’t agree or want to add one? Check out Just Bat Reviews on facebook or twitter. 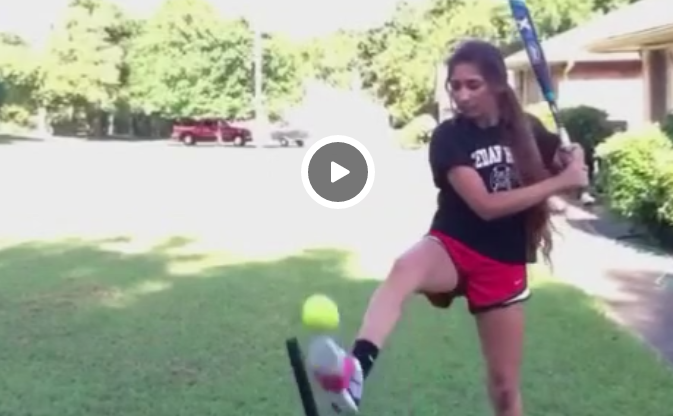