After hundreds of hours of testing, our group of professional and amateur hitters has an opinion on the best bat for home defense. The right stick, we conclude, depends on the type of apocalypse and the type of defender. We walk through those options below.

The 29-inch Cold Steel Brooklyn Crusher is the best pick for the one-swing defense. The bat’s durable yet heavy construction will last longer than you do. And, if you can get solid contact in the dark, expect no less than one dead zombie. Price check: Amazon.com.

We should note that the Crusher is not a BBCOR bat. However, we should also note that it’s composed of a material that looks and feels a lot like the indestructible Baum Bat, which you can find more about on our bat reviews page. Keep swinging and stay safe!

Warning: this video is funny in the sense that fake blood (that looks pretty real) and fake zombie heads getting destroyed are funny. If that is not funny to you, then it’s likely not worth the watch. The point is that the bat works.

At 29 inches and 37 ounces, the Cold Steel Brooklyn Smasher is a natural killer. The plastic-type material is virtually indestructible—as several YouTube videos point out. (It also comes in a 34-inch, but that’s a lot of beef to carry around—we liked the 29 inches better).

We found the 29-inch length a sufficient striking distance. But, at 37 ounces, the bat is made for muscle. As impact strength is a function of bat speed and mass, this 37-ounce swing is suitable for a one or two-hit wonder. Those looking for a single bomb on a single zombie will find this helpful. Against a mass attack, however, expect fatigue to be your death.

Although first in popular culture, the wood bat laced with barbed wire would be our third choice if we needed a one-hit-wonder in the zombie apocalypse. But, since durability may be a chief concern in a severe outbreak, a wood bat base is likely not practical. And making consistent contact on the face grain (label up!) would be difficult if a zombie spawn attacked. If you could put the barbed wire on an aluminum bat, then we are talking.

And while we are critical of Lucille, we are not sold on the idea that barbed wire improves the kill rate of zombies—although it increases the impressiveness of the damage. If anything, we would prefer barbed wire around the bat’s sweet spot and balance point. Not, as Lucille is built, with it around the end cap, Max power is 6 inches down from the end cap.

If you have a better expectation of the number of zombies or intruders you may be facing and are slightly concerned you may not possess the arm strength to swing through each of them, consider a bat with a lighter swing weight. This Boat Bat is made to, among other things, knock out big fish you might catch on your boat.

It’s also a great crowd-pleaser, if you know what I mean.

There is also a smaller one. At about 16 ounces, the bat is a natural swing for the strategic hitter, or better yet, two serve as a practical double-fisted option.

Our favorite lighter option is the Streetwise Baton Light. It is a 2000-lumen flashlight inside a metal baton with barbs at the end. It would help if you kept up on the AAA batteries is never a plus. Still, seeing the zombie clearly before unloading on its earhole is a significant plus—primarily if your spouse is occasioned to wander the house in the middle of the night.

If we want a bat that is both useful for actual softball gameplay and surviving the zombie apocalypse, then we have decided on an end-loaded slowpitch softball bat with the lightest total weight possible. A standard 34-inch length is a must when distance matters. The concentrated 2 1/4 barrel makes more sense than a big barrel when attacking softballs and, well, soft balls. An end-loaded bat with overall lightweight makes the most sense for max swing speed.

It also raises the least amount of questions when found in your trunk.

A few bats fit into that realm, but we like the Z4 series from Louisville Slugger. This 26.5-ounce end-loaded bat with a focused barrel would be ideal for lighting up zombies and slowpitch scoreboards around the country. And, hello, the Z in the name must stand for something.

Outside of the obvious, which is the intruder possibly carrying a gun, the use of a bat for home defense makes good sense. Bats are otherwise harmless until purposely drilled into the side of someone’s skull or back. Few items readily available in a home could be used as a child’s toy and the weapon of choice in a zombie apocalypse.

In practice, however, bat usage as a weapon has some problems. First, proximity is an issue. At no longer than 34 inches, the length of the longest bats made today, attacking an intruder with a bat means a close encounter. The closer the defender is to the wrong thing means, the higher probability of potential problems. A single miss could be a catastrophic mistake.

Second, at 37 ounces, which is what the 29-inch Brooklyn Crusher weighs, swinging the bat repeatedly is a difficult task. If total force is a function of the bat’s mass and speed, and it is, then a slow swing speed with a heavy bat isn’t any better than a very light bat with a fast swing speed. Bat weapons become impractical as they become impossible to swing, and an ultra-heavy bat for the average strength is only suitable for a swing or two. A mob full of zombies means your end-loaded Cold Steel Brooklyn Crusher won’t get you far, despite your desire to go down swinging. 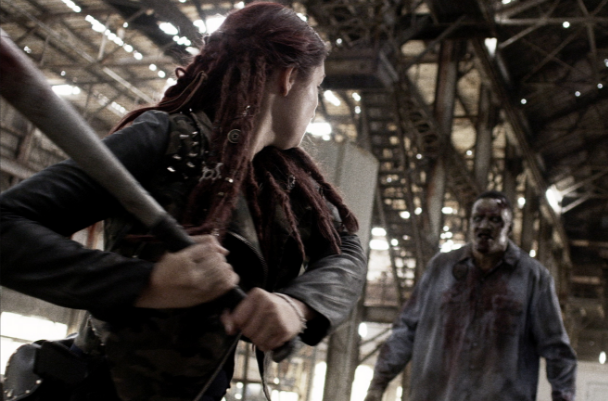