I have been training baseball players since I was a pro player myself. Something like 30 years at this point and I’ve seen big changes in the Youth, High School and College games.

Back in the day, we ALL played Little League and were forced to use the very specific 2 ¼” barrel that had to be “Little League Approved”. Then, I watched as many Little Leagues converted to PONY or players left to play Travel Ball with the 2 5/8” barrel with longer pitching distances and bases. Now with BBCOR and USA Baseball certified bats, the game has continued to change.

Most of the players I train now are elite High School players from SoCal who have college commits or being recruited as well as some D1 and JUCO players who are all required to use a BBCOR bat.

Boombah makes more than just bat bags, they also make a BBCOR bat fashioned after the Rawlings VELO they refer to as the Boombah Cannon.

In case you missed it—BBCOR is the acronym for “Batted Ball Coefficient of Restitution” or in non-engineering lingo, the ball reacts like a wood bat when hit. But that’s not entirely true.

One of my players is at a well-known D1 university that is deep into how they want their players to hit using BBCOR bats. I’ve seen some of the notes given to this player from the hitting coaches and it surprised me. Basically, BBCOR bats are supposed to perform like wood but most players at the higher amateur levels can hit a ball further to center field with a good maple wood bat. That’s due to one major factor—the weight of the barrel is heavier in wood bats. Therefore, BBCOR bats with lighter barrels do not equal wood in some batting scenarios, they have LESS pop. But there are options for players to consider based on their bat speed and hand strength.

<<<See our article on the best BBCOR bats>>>

One Piece or Two Piece Bat – That is the Question

The Mizuno MaxCor is a soft barreled bat different than any you may have ever tried. See our full review here.

In more general terms, we discuss the value of a one or two piece bat here.

When asked by parents what brand of bat to buy their player, it’s not that easy as there are variables to consider before dropping $300+ on a bat that has about 1,000 hits in it. First, is one piece or two piece bats better for my hitter?
That same D1 player I mentioned earlier has any Rawlings Bat to choose from as his university has a sponsorship deal with Rawlings. The benefit for this player is that he can experiment with different models to find the best fit for him. He is strong guy so almost two years ago I convinced him to move up from a 33” to a 34” because I knew he would not lose bat speed with the extra ounce and inch. And he began hitting with more power just by going bigger. Back then he chose the 34” Rawlings Velo Balanced and it was working very well for him. I tried the bat and like the one piece bats personally, plus it was balanced like the old M110 wood models I used as a pro.

DeMairni’s CF Insane is one of our most favorite two piece bats on the market. It’s end load is brilliant. See our full review here.

Then this past Summer he played in an all wood bat Summerball league and started using Chandler Maple Bats that were heavier toward the barrel. That extra barrel weight was VERY beneficial to his swing as he can really whip the barrel through the zone. He was a league leader in HR’s, RBI’s and Average and made the various All-Star Summerball teams. So after the season, we discussed how he could take that wood bat barrel whip and translate it to an aluminum BBCOR bat from Rawlings.

About a week into the new school year he called me and told me he was switching to a two piece bat. I’ve learned over the years that just because I may personally not like the two-piece bats, they are a good fit for some players. I asked him to explain his rationale for making the switch to a two piece Rawlings Quatro model. He said, “The Rawlings Quatro, although two pieces, has a heavier barrel and I can control it better. It feels more like a wood bat but with a much longer sweet spot.” Well, that answer proved to me that he knew he could generate more power to center field compared to the lighter barrel one piece Rawlings Velo. He starts the season this week and the Rawlings Quatro is his bat for 2018.

This image is of every bat’s barrel size with the same size ring on it. In order from largest barrel profile to smallest.

I train players in an indoor batting cage so the sound of the PING of some of the bats can be piercing to the ears! But sound aside, many like the Marucci CAT7 BBCOR model. Sure, it’s loud, but they like the balance and the pop they feel off bat. I’ve tested this model and like it as well. The Marucci CAT7 is balanced, has a thicker than normal handle with a nice grip and is a bit less in price than most BBCOR bats at $249.
Marucci claims the CAT7 has double the sweet spot as the older CAT6 model and I find that to be true.

Some of the players I train have the resources to change bats often. Several have recently switched to the Easton MAKO or Ghost X models. These are both two piece “composite” bats that are marketed as a “light swing” with the “longest barrels in the game, giving players massive sweet spots for more power.” Going back to the D1 program that believes light barrels contribute to lack of power to center field, this marketing line is actually a negative for certain types of hitters especially those with 100+ mph exit velo.

If your hitter is just beginning to use a -3 as all BBCOR’s must be, these “light swing” two piece composite Easton bats might be a good choice for you if you can afford to step up in price– The Easton Ghost X is $449 and the MAKO is around $250.

BBCOR is Here to Stay

Voted the Best BBCOR bat for 2018 we love the feel and power of the 2018 Rawlings Quatro.

Back in college in the late 80’s we used almost exclusively the Easton line of bats. I preferred the “Black Magic” model and broke records at USC that are still in the books. How much did switching to BBCOR affect home run production in college? I hit more home runs in 1988 with my Black Magic than the ENTIRE USC TEAM did the year the BBCOR’s were mandated in the NCAA!

I have come to accept BBCOR’s for what they are supposed to do…protect pitchers from getting hurt or even killed with line drives. I also understand the economics of forcing schools to use wood as many programs wouldn’t be able to afford the higher costs over a long season.
So as I train my SoCal elite hitters it has become very obvious that the more mechanically sound the batter can be, with a locked in mental approach and impeccable timing, the less the type of bat they use matters to the results.

What it all comes down to is the simple question—which BBCOR bat is best suited for my hitter? The options for choosing the right BBCOR bat are wide open, especially if you have the financial means. Many high end baseball-centric sporting goods stores around the country have demo bats and a batting cage to try out the models listed in this article. DO THAT! Sample every bat you can and figure out what “feels” best. But I’m pretty sure a great hitter, like Mike Trout, could have caused the same damage in high school using a $59 BBCOR from a discount sporting goods chain as a state-of-the-art $450 two piece composite. 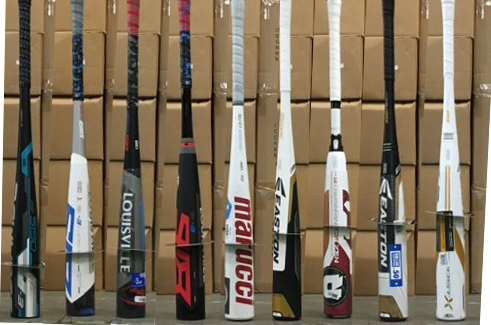