Every successful hitter from Little League to the Major Leagues has three common traits.

These are the three pillars of great hitters.  Without even ONE of these traits, the hitter will struggle.

As a former college and pro catcher, I needed to be sure my timing as a hitter was solid every game.  Some days the ball looked like a BEACH BALL just floating up there and asking to be crushed while other days it looked like a damn TIC TAC zooming past me at a million miles per hour.

As a catcher, I focused on how to disrupt the timing of opposing hitters by maximizing the stuff my pitcher was throwing…or getting in the batter’s head!

THE SOLUTION FOR TIMING – SLOW TO THE FRONT TOE…THEN GO! Many of the players who ask me to work with them are out of sync with the timing of their mechanics and timing the pitch in the air.  Often I see players jump with their upper body and the head drifts forward several feet making their hands drag through the zone.  When it comes right down to it, the main culprit with this issue is almost always the front foot being too fast.

From years of experience, the basis of good timing comes from having a slow front foot that REACHES out as the pitch is being delivered.  Then when the batter “feels” it’s time to swing, the front toe lands softly and the batter begins the swing.

What I see all too often is the opposite and what I call a “foot stomper”.  This is when the hitter slams the front foot down violently which triggers the front shoulder and front hip to immediately pull out leaving the little room for margin of error with the timing. Foot stomping is just about the easiest fix there is.  I’ve had 8 year olds make this adjustment in one session and instantly get results in the next game. I start the fix on the tee with no stride and have the player swing.  Since there is no stomping, the upper body can stay back better and the hands whip through the zone on the proper path.

Then I have the batters take a super exaggerated slow front foot and land on the big toe, THEN, swing from there.  But this is the easy part to the adjustment.

When I go to front toss, it’s tougher for the batter as now the ball is in the air and they need to make the adjustment to their timing.

As the timing gets more and more consistent, I back up and stand up and throw.  By then, most players can make the slow to the toe adjustment and now have a strategy for their timing.

HOW PITCHERS (AND CATCHERS) DISRUPT TIMING If you ask a batter who is completely in the zone, they say the SAME THING!  “I’m really seeing the ball well right now and when I get my pitch I’m not missing it.”  We’ve heard that generic line on half the post-game interviews from players who just had a big game.  But when you ask the SAME player after he goes 0-5 with 3K’s he will say, “I’m not seeing the ball well right now”.

Is it really a vision thing?  NO!  It’s a TIMING THING!

As a catcher, I would watch the other team take batting practice and look for strengths, flaws and tendencies.

A guy who pulled everything in BP got me thinking about how to pitch that batter during the game.  He would likely be getting a steady diet of fast and slow pitches away mixed with some chin music when we are ahead in the count to keep him honest.

A guy with a slow bat would NEVER see a slow pitch.  Why would I want to allow a slow bat to speed up?  This guy got a steady diet of fastballs often climbing the ladder.

But when a batter walked up with a confident swagger, a calm demeanor and the look of focus, I got nervous.  This is when I tried to distract the batter and get him out of the zone.  Sometimes it was just a little joke but that didn’t always work. One instance that stands out in my memory was when we simply couldn’t get Eric Karros of the Dodgers out.  He and I were former Summerball roommates and good friends so after he was like 3 for 3 one game I did something that WORKED but sometimes desperate times call for desperate measures—I actually TOLD him what was coming!

As much as my pitchers tried, they could not disrupt this hot hitter’s timing that day.  He was right on fastballs, sliders, change ups and using the entire field.  In other words—he was on FIRE that day!

So as he walked up for his fourth AB with the winning run on second base, I said to him, “EK, we can’t get you out today no matter what I call, so I might as well just tell you what’s coming.”  He immediately looked at me with suspicion and I knew I had casted some doubt in his mind and distracted him.

So I put down the sign for fastball away and told him a fastball away was coming.  He took a fat fastball on the outer half for strike one.  He yelled back at me to shut the hell up as the ump was cracking up.  Then I told him here comes the slider away and he fouled off the same pitch he had crushed earlier.  Next pitch I told him to watch his lips as we were coming up and in. Once again he told me to shut up as the 0-2 pitch backed him off the plate.  Finally, I told him we had him set up for a slider away and he hit a lazy fly ball to right field for an easy out.

What this story suggests is that I disrupted a hot hitter’s timing by casting doubt in his mental approach.  Instead of letting him see the ball, time it and crush it I had him second guessing therefore his immaculate timing that day was thrown off by an external factor…and he was super mad at me too! But it worked and I learned how fragile the timing of even the best hitters can be day to day or even AB to AB.

From Beabetterhitter.com this graphic shows the time it takes for a hitter to react.

One of the most difficult things to do in all of sports is hit a nasty pitcher when the game is on the line.  So for a pinch hitter to do it they need to have what I call “Prime Timing”.  That simply means having your timing locked into GAME SPEED.

When players I train tell me they have a game the next day, I change my practice routine and focus 100% on their timing.  I throw hard from a short distance to get them to get their front foot DOWN softly and catch the pitch out in front of their front foot with the bat.  We do this until they get it then I switch to curveballs, sliders and change ups all in an effort to get their timing locked in to “Prime Timing” and ready for game speed.

Soon Spring Training will begin.  Any clue what most players say they focus on during Spring Training?  Getting in “baseball shape” and getting their “game timing set”. There is no other sport where timing and disrupting timing is as critical to success or failure as the great game of baseball. 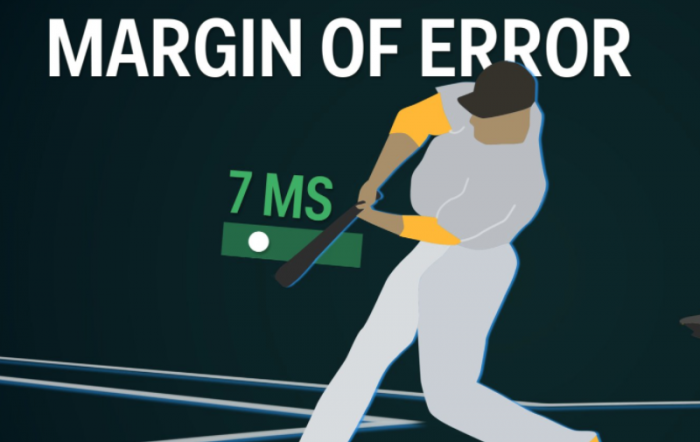