How 8 Charts Tell the Story of Baseball Bat Performance

Over the years, we’ve captured 10,000+ exit speeds on any number of BBCOR, USSSA, USA, BESR, and Fastpitch bats. This data collection effort, we believe, is the largest in history (at least that isn’t owned by a bat company), and the analysts of our dataset put us in a unique situation to measure bat performance. (We offer individuals access to the data set too).

We use the word “performance” liberally here. When we say performance, we mean the exit velocities on pitching machine work via HitTrax and Rapsodo. The data could be more useful if it were in-game data, no doubt. But what one might gain in measuring exit speeds in-game, they lack in its feasibility (we know of no high school field equipped with StatCast) and its repeatability: pitch speeds, ball types, player effort, and the lack of repetition under similar circumstances make gathering comparable data all but impossible. In any case, we use the word performance to mean the exit speeds measured in cage work with all the caveats that come with it.

Although data can be sliced as anyone could see fit, we’ve created 8 data visualization charts to make some points about bat performance.

One way to measure bat performance generally is to consider how well a bat does for a given hitter on a given swing compared to how well the hitter did with all the bats that day. We measure “how well” a bat does on a swing by comparing its exit speed to the average across all bats.

Converting each individual hit into a percentage-based improvement or decline of the player’s average allows us to combine every impact for the same bats across multiple hitters.

The below chart does that.

For 2021 BBCOR data we had over 2000 hits by six different players. We calculated the differences between each individual hit and the session average, figured its percent improvement over the session average and categorized each by the bat. From left to right on this chart, the bats go from lightest to heaviest swing. 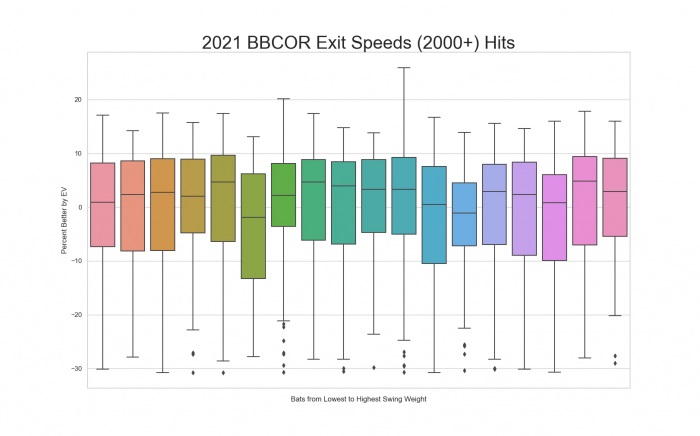 Understanding the Chart: You can read more about box and whiskers charts here. The colored box represents the middle 50% of the hits. The horizontal line within the box represents the median (or most common hit); the middle of the box vertically is the average; the ends of the “whiskers” represent 1.5x the end of the box from the mean; diamonds past the ends of the lines are considered outliers. The x-axis is the different bats. The y-axis is the difference between an individual hit and the player’s average for that session.

If we were to expect anything here, it would be a general trend upwards as you traveled to the right of the chart. Heavier bats should be able to hit the ball harder. But no such direction exists. Indeed, it’s hard to see how any bat is any better than another with that chart.

Another way to look at the distribution of these bat’s exit speeds is their density overlaying on each other. See this chart here: 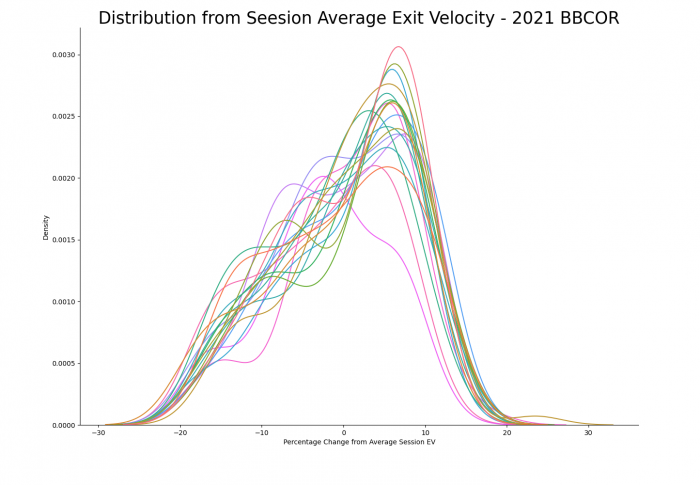 Interestingly, each bat has a rough range of +/- 20% of its average.

Although some density curves look slightly different when overlayed on the rest, no bat, or even group of bats, tends to do better than the rest. Players tend to do about average with one bat as they do with just above every bat.

Is this to say that all BBCOR bats perform roughly the same?

We have a hard time escaping that conclusion.

It is definitely to say that any claims on serious bat ‘performance’ superiority do not play out in an honest effort of extensive data analysis.

The debates between swing and bat weights have played out for years now. To get some of you up to speed, the issue is twofold.

First, bats don’t weigh what they claim they do. That is, take a bat with a “stated weight” of 21 ounces and then put it on the scale. You’ll see the bat weighs more like 22 or 23 ounces.

Here’s a chart showing almost 400 bats with their stated weight on one axis and their actual weight on the other. 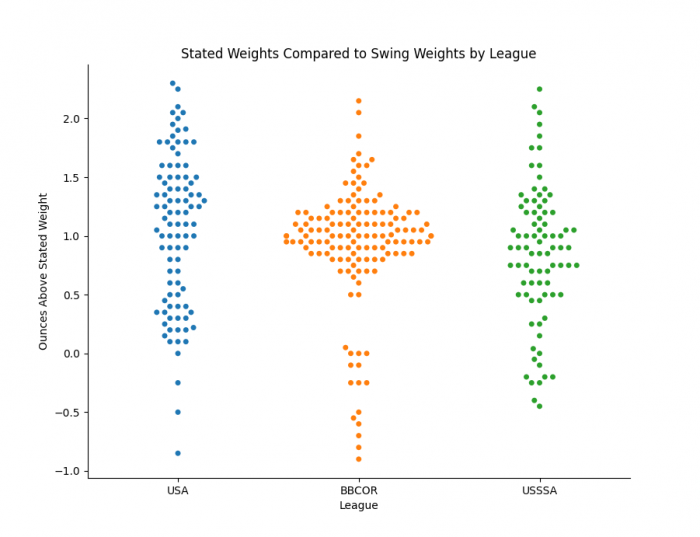 Second, the friction between scale and stated weight stems from three factors. First, engineers know that swing weight matters most. Second, consumers think it’s reasonable to get what they were told they bought. Third, marketing arms that don’t feel obligated to explain the difference between how hard it is to swing a bat and how heavy that bat weighs.

More than a few lawsuits have pressed the issue, but the stated weight debacle stands as accurate today as it did when we started doing this almost ten years ago. Bats are still sold at a certain ‘weight’ and all but none of those bats weigh what they say they do.

Despite that drama, many are coming around to the idea that swing weight matters most. We weren’t the first to say this, but we believe we have been the loudest. Swing weight is the variable that controls how easily a bat is swung. Calculating it, though, takes some work. It is a complicated function that considers a bat’s total weight, balance point, and pendulum period.

There is virtually no way to determine a bat’s swing weight while standing in a sporting-goods isle.

Of the two variables the average person can measure (scale weight and balance point), the balance point concerning the knob is more helpful in predicting a bat’s swing weight. 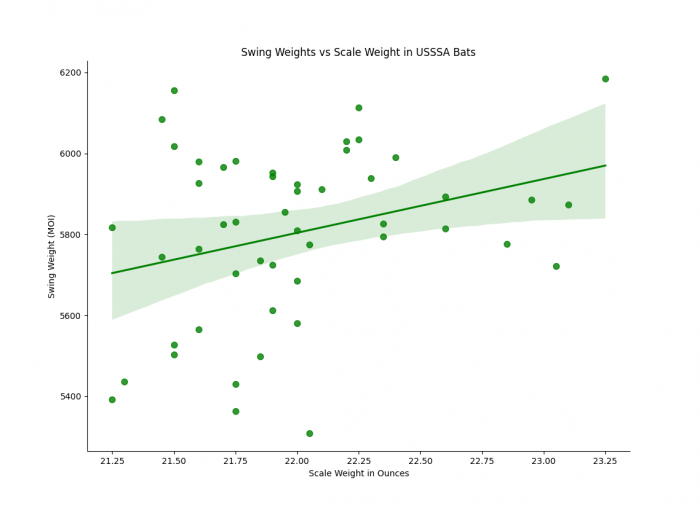 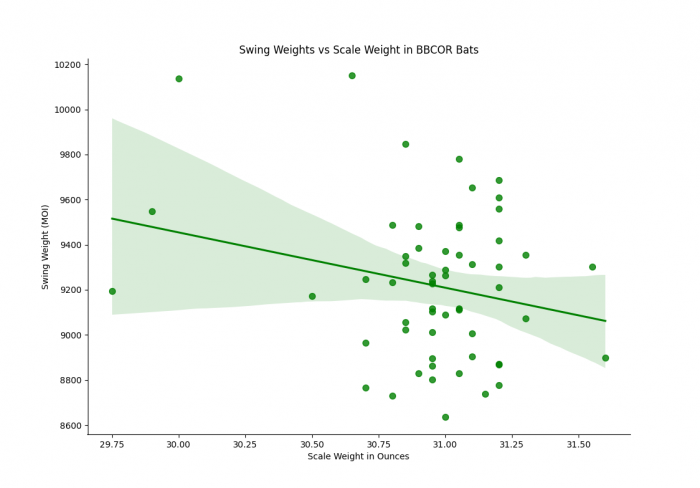 The green lines above are a rough approximation of the direction scale weight predicts swing weight in the charts above. If scale weight were a reasonable predictor, it would be going up and to the right while the light green band was thin. However, notice in the 2nd chart specifically, scale weight is negatively correlated with swing weight.

There is nothing intuitive in that. It says, on average, a BBCOR bat that weighs more has a lower swing weight.

The good news is that swing weight is more a commentary on the distribution of the weight in the bat, not the total weight of the bat. The following charts use balance point as the predictor and, while not perfect by any means, show much more predictability when determining which bat has a heavier swing weight. 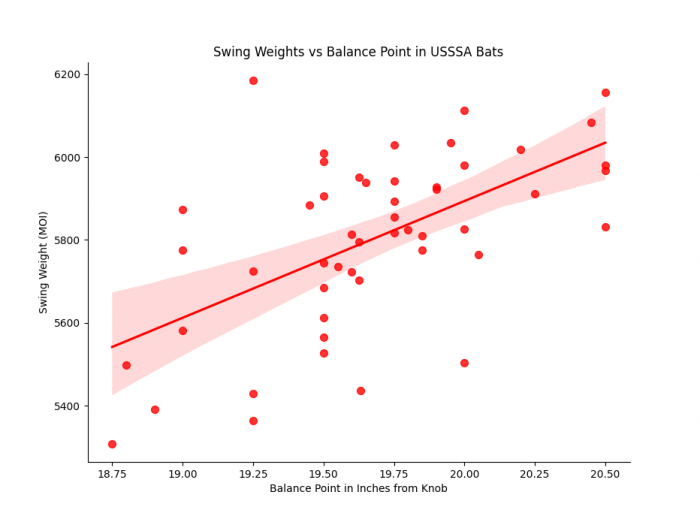 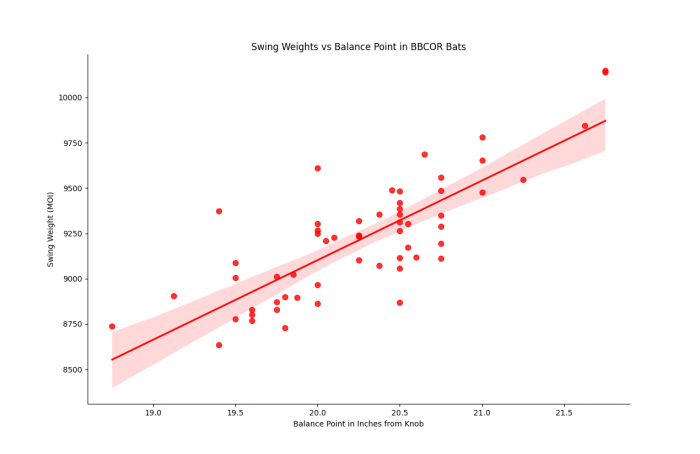 Stats Note: the R-Value of scale weight as a predictor of swing weight is under .20. The R-Value of the balance point with respect to the knob is closer to .80.

The easiest way to estimate swing weight is to measure the balance point of your bat and compare that to other bats. Please do not get caught up in the scale weight (or stated weight) as it is a horrible predictor of how hard it is to swing a bat.

We’ve long argued that the most significant difference in a bat’s performance is its swing weight. All other things being equal, a bat with a higher swing weight will hit the ball harder. We wish such sentiments were easily provable with the data. But, despite our best efforts, the swing weight/exit speed relationship is far from obvious in the data.

This chart shows five different hitters hitting several other bats with varying swing weights of the same league. The height (y-axis) plots the max exit velocity of the bat during this hitting session. In a perfect world, we would see a hitter’s line peak at a particular swing weight. But, sadly, that isn’t what we observe in the data. 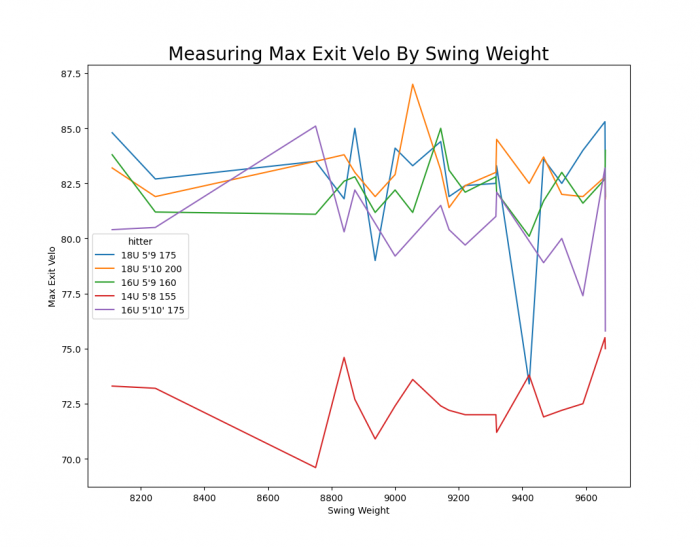 Clearly, the answer is no. Swing weight is a key variable in determining how hard a bat is hit.

But, it is suggesting that max exit speeds are not a good way to predict the swing weights of bats and vice versa. The interplay between exit velocity, swing speed, and swing weight is too complicated and nuanced to pick up in a simple chart like this.

The charts above tell a pretty straightforward story even if most don’t want to hear it.

1. The greatest predictor of exit speeds? The kid hitting.

2. Any head-to-head exit speed matchup showing a ‘winner’ should be met with a serious, serious amount of skepticism.

3. Stated Weights are nearly entirely pointless, yet the industry continues to categorize their bats in this manner.

4. Scale Weight is a terrible predictor of swing weight. The balance point, though, is right about 80% of the time.

5. Swing Weight is important, but measuring how important when using exit velocities in cage work is impossible because the bat ball collision is too nuanced.

6. Max Exit Velocity isn’t as good as we wished it was in predicting a bat’s average exit velocity.

7. You don’t make a lot of friends by telling everyone their bat performs about the same as the others.