We spent more time than we’d like to admit watching the 2022 College World Series and tracking the bat usage. We did this for the 2021 College World Series too. Below are our findings. See our disclaimers where we discuss how these numbers are affected by school bat contracts.

We watched the starting lineup for all the games we could find for 53 of the 64 teams in the 2022 CWS. The 11 teams left out were because we could not find a good enough recording of their game to identify the bats. Of the 53 teams we did watch, we documented 477 different college players and what bats they used. You can see all that documentation here.

Most Used NCAA Bats By Brand

The highest level of data shows the bats by brand. DeMarini is dominant, Slugger and Easton are close, Rawlings is a reasonable 4th, Marucci is clearly 5th and then there is only a considerable drop-off.

Considering the MLB bat distribution where 20+ brands are used at the plate, college baseball is much less competitive with only 8. We only saw one kid from Texas Tech, Dillon Carter, Using the Warstic Gunner. New Mexico State’s entire lineup used an Anderson Widowmaker (2021 or 2022) and there we a smattering of Victus bats among mainly Marucci schools. But over 95% of the work was between 3 companies: Wilson (who owns DeMarini and Slugger), Rawlings (Who owns Easton and Rawlings), and Marucci (who also owns Victus. We can break down each of the brands by their model series. For example, all the 2022, 2021, and 2020 The Goods from DeMarini in the same column. We show that below here. Easton changes their main series so often (from Fuze to ALX to Black Magic, for example) that is hard for any of their series to get any traction on this chart. We think they struggle collectively because of that. They have way too many options and don’t realize that parents and players don’t want more choices, they want more confidence in their choice. But marketing’s push to make something that’s the latest and greatest is too great.

In any case, The Goods is entirely dominant. Slugger’s Select and Omaha series combined make up a huge section of the NCAA 2022 bats. The Goods One, much to some people’s surprise we would guess, is more popular than the Voodoo One. Marucci, which had virtually no play in the 2019 CWS, has come along nicely with the CAT and CAT Connect lines. There are 21 bats in this list although there is 70 total that was used. These 21 bats make up 75% of the total bats that were used. Another reasonably interesting distribution to consider is the year of the bats used in the series. COVID, distribution channels and companies pushing multi year bats have changed this dramatically, but the 2022 CWS has about 40% of its bats as 2022, 27% as 2021, 11% as 2020, 11% as 2023. Bats older than 2020 make up less than 5% of the market combined with the oldest bat a 2013 Louisville Slugger Omaha swung by Standford player Brett Barrera in the Standford Regionals. 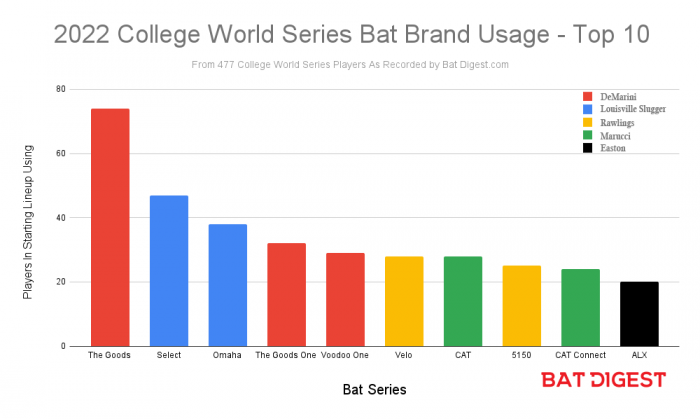