In short, the bat is EXACTLY (but a paint job and serial number) the same. And that’s not a slight on DeMarini. They are not claiming the bat is different. The CF is legendary and has dominated the USSSA space. So, why change it? They haven’t.

In large measure, the bat has not changed much from its 2018 version. The 2019 to 2020 version changed the endcap, but the barrel, connection piece, and handle are all the same.

After hitting extensively with every CF Zen from 2017, 2018, and 2019, we make some comparisons. Maybe even most, consider the CF Zen the top shelf bat in the youth baseball and BBCOR space. It is, by our account, one of the finest bats we ever get to hit (and we’ve hit them all). We discuss how the bat has changed, what to look for, and why you might buy the 2017, 2018, or 2019 DeMarini CF Zen.

Price Check all the CF Zens

Which Zen should you get?

Of course, this depends on lots of factors. But…

Instead of bogging you down with a bunch of caveats, here are our general recommendations:

If you’re going for BBCOR, we don’t think they’re a ton of performance difference between the 2017 and 2018 BBCOR. Both are outstanding. We’d go with the better price/warranty. 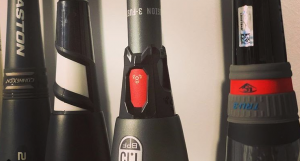 We do like the new 3-Fusion handle only found on the 2018 version if, for nothing else, the aesthetics of it all. In practice, removing bulk/weight from the older d-fusion transition piece allowed DeMarini to reinforce the bat’s durability without affecting swing weight. At the BBCOR level, though, the durability in the 2017 Zen was not an issue.

Each year since its existence, the CF Zen has been released in multiple sizes and models. The big barrel drop 10, we believe, is the most popular, followed closely by the drop 8 and 5 and the BBCOR version. For 2018 a USA Bat was also released.

The most common misconception we face when discussing the CF Zen and possibly their largest criticism of the bat online is the disparity between what the bat says and what it actually weights. Often a CF Zen in the big barrel space will weigh over its stated weight. (Elsewhere, we proved this is not true relative to other bats on the market, by the way).

But, as we stress ad nauseam, the bat’s actual weight is NOT the swing weight.

And, EVERY CF Zen, we have measured the swing weight of falls right in line with other light swinging bats of its stated class.

The 2019 was an early release bat set in the big barrel (USSSA) market. It comes in a drop 10, 8, and 5. It appears the bat’s early release has at least something to do with the retroactive disapproval of a couple of drop 10 sizes in the 2018 CF Zen line.

We expect a BBCOR version of the 2019 Zen to drop sometime in August or September of 2018. We also expect a new USA Version by the end of the year—but these are just guesses for now.

The 2018 CF Zen is released in a BBCOR, Big Barrel (USSSA), and USA Bat versions. A couple of sizes in the drop 10 USSSA space were deemed illegal on a retroactive basis by the USSSA.

Some argue, and we tend to agree with them, this 2018 CF Zen is the retooled CF Zen from 2017. Some internal pictures showed the bat with the same ring DeMarini added when the 2017 version was banned in some sizes.

According to our exit speed tests, we found the 2018 CF Zen one of the hotter bats out there. In terms of feel, there was no bat players liked better.

Early in 2017, USSSA announced they banned the 2017 CF Zen in many sizes, including the 2 3/4 drop 10 and the 2 5/8 drop 8. This announcement came the weekend of some preeminent tournaments and left a bunch of people scrambling.

In time, DeMarini released a modified version of the 2017 CF Zen with a different serial number and a composite internal ring that allowed it to pass the test (and have less pop). This was referred to as the DeMarini CF Zen Retooled and was marked by an orange end cap and some orange lettering.

Though the process left a few with a bad taste in their mouth, the truth was the Retooled CF Zen was likely still the best performing big barrel bat on the market in 2017. In fact, some argued the 2018 CF Zen was the same bat as the 2017 version but with a different paint job.

In other words, if you can find them, we think the 2017 Retooled CF Zen a great purchase in the drop 10 and drop 8 space.

The first CF Zen was this 2017 version. It came in several sizes and, at the time, was the first bat banned in USSSA play for quite some time. Specifically, the drop 10 2 3/4 and the drop 8 2 5/8 were banned for being too hot.

The experience with these bats was mesmerizing. The blue 2 3/4 Zen had a distinctive hollow pop sound you could hear from the other side of the ballpark. Little whippersnappers who weighed about as much as their cleats hit the ball hundreds and hundreds of feet. It was, to say the least, a game-changing bat.

And, turns out, Illegal.

If you can find these bats and are willing to pay the secondary market price for them, then expect to hit bombs. Until, of course, it breaks. These were notorious for their durability. 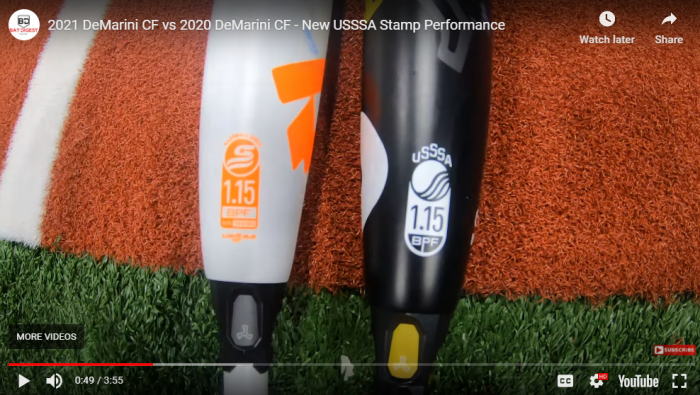