We’ve tracked the bats of the college world series for several years.

We’ve put that data into 7 charts. In good faith, we also put the data we capture out to the public here. You’re welcome to fact-check it or do with it what you will. Please tag us if you do.

(The CWS is still ongoing, we’ll update these as more teams advance from the Super Regionals through the CWS in Omaha).

Before we imply too much from the data, we should understand bat contracts and how they work.

The vast majority of schools have bat contracts. That is, a school signs an agreement with a bat company. The school gets, among other things, money and equipment. Companies get access to the school’s players and coaching staff and any branding that comes with TV time. Contrary to popular belief, bat contracts (at least the ones we’ve seen) don’t force players to swing a certain brand. Still, though, very few players don’t swing the brand that sponsors their school. There are likely many reasons for this, but we’ll go with “you have to buy it yourself” as the go-to.

In other words, it’s hard to say that elite college players are completely unbiased when choosing the right bat for them.

That said, does anyone believe elite college players will intentionally put themselves at a disadvantage because they aren’t willing to buy their own bat?

Still, though, counting what bat is used the most in the NCAA and then making sweeping determinations about its status as ‘best’ seems more an exercise in marketing than performance.

Pro tip: click on the charts to make them bigger and more legible.

If you do the eyeball math on these charts, you’ll see that the two companies control well over 80% of the market. Rawlings owns Easton and Rawlings; Wilson owns DeMarini and Slugger.

The lack of competition does nothing for the consumer. While we’ll save our monopoly ranting for other posts, let’s say that there is very little downward pressure on price when 80% of the market is controlled by two bat companies that will undoubtedly price match each other all the way up.

In other news, Marucci owns Victus. So, what looks like 95%+ of the NCAA baseball market is run by 3 companies.

Also, Easton did REALLY well during the regionals. They went from tied from 3rd in bat share to a solid 1st place in the Supers. 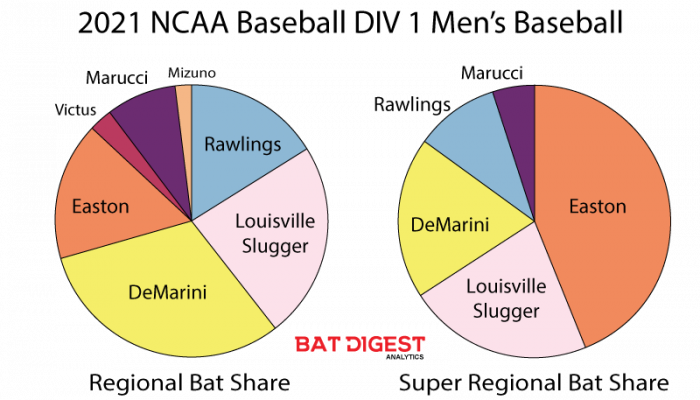 As we mentioned above, we watched 50 of the 64 teams that made the regionals and tracked their starting bat lineup.

This graphic is a sort of a master list in a single graphic. The size of the bubble is the frequency of the bat in lineups, and the groupings are done by year. You might notice, for example, there are more 2017 bats than 2018. Why? No idea. But that is what we found.

There might be lots to say about this, but we’ll spare most of our commentary as it’s rather subjective. We find the 2020 Fuze (which is really the 2020 Fuze XL) as the biggest surprise—it is actually the 2nd most used bat in the entire tournament. As well fun to see bats like the Voodoo alive and well in 2012 and still rocking it almost 10 years later. 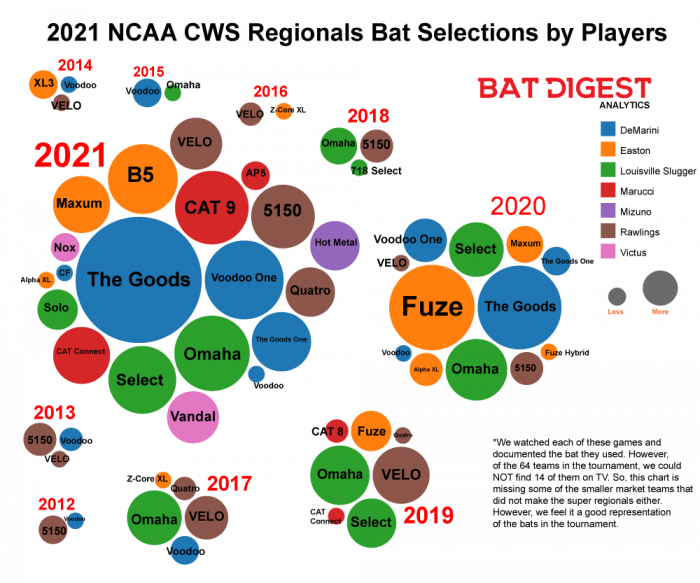 Chart 3: What Bats Used Most

This bar chart combines each of the bat models over the years. The Goods, for example, has the most frequency in the 2021 tourney. That blue line from The Goods represents the 2020 and 2021 versions. The green Omaha line represents all the Omaha’s used in the tourney—and we say some as young as 2015.

Although the Goods/Voodoo line does win these categories, bats like the Fuze, Omaha, Select, 5150, and VELO hold their own. 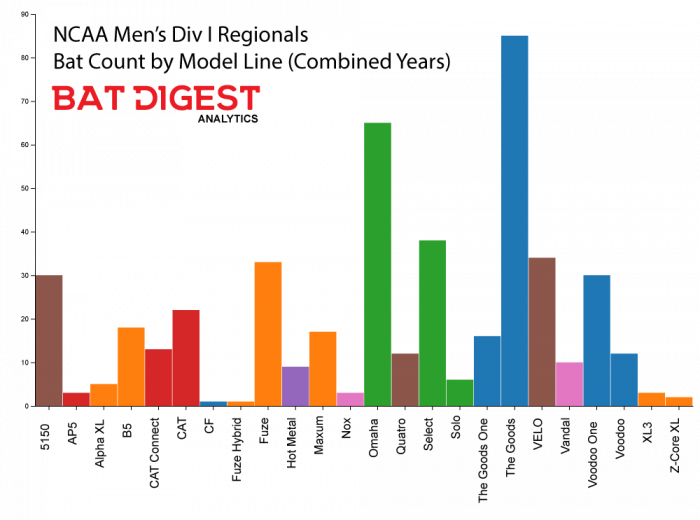 Single-piece bats are still the most popular. But Hybrids have come a long way in the last few years (Thanks Voodoo/The Goods/Select PWR).

Is there much to consider here?

The 9 hitter liking two-piece composites seem reasonable. But so many college hitters are all over the Hybrid/Single piece. 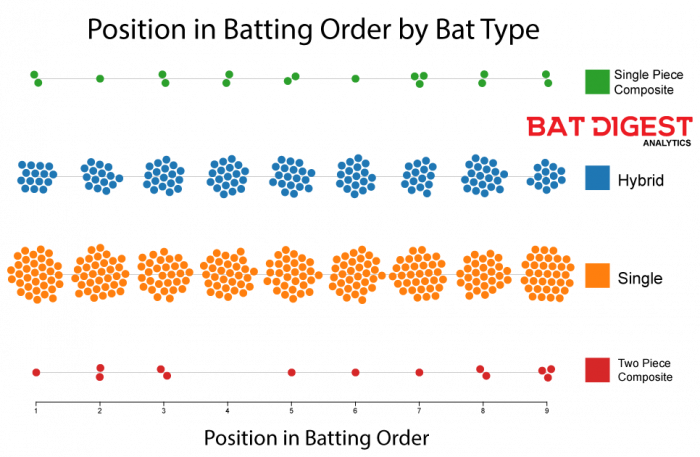 This chart shows how brand dominance changes within the 2021 tournament by bat year.

Not sure. But we thought it was fun to look at.

Like the chart above, but by base model, not the brand.

Chart 7: Line Up By Position

We noticed, without surprise, that the same position in the field often filled the order in the lineup. Cetnerfielders, for example, tended to bat 1st. The DH was in the 4-hole. The catcher often at the end of the lineup. Shortstops were either 1/2 or 9.

We made this chart and confirmed some of our suspicions. However, there’s still plenty of variabilities. Except for a clean-up hitting shortstop, there’s at least one of every position type in a spot in the order. 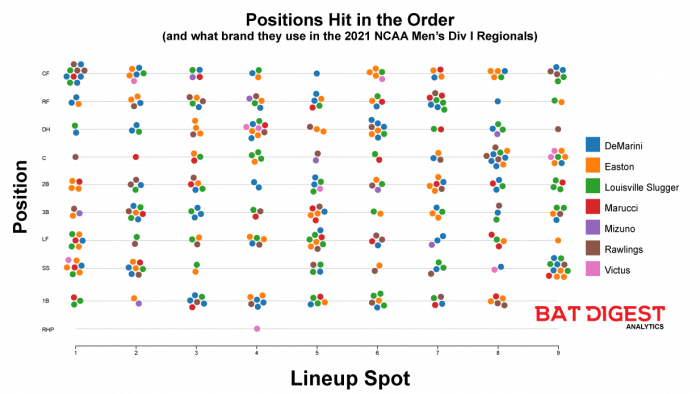 We aren’t one to read too much into any trends we do or do not see above. We don’t think this proves anything other than what most look for in charts like these. That is, there is no superior BBCOR bat. There are definitely goods ones—and there are definitely companies that have, for any number of debate reasons, have dominated the space.

We think the overwhelming story behind this is that BBCOR has accomplished what it set out to accomplish: stop making the bat an advantage.