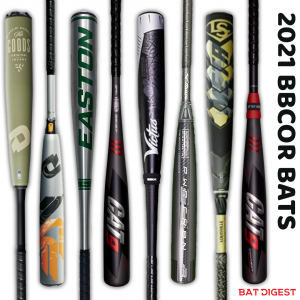 We spoke with a half dozen major manufacturers and distributors about the cluster that is soon to be baseball and fastpitch bat inventory. None of them agreed to be on the record. But, suffice it to say, every major player in the bat space feels precisely the same: change is coming because COVID fundamentally shifted the distribution model.

If you’ve followed bats over the last several years, you should expect most new BBCOR bats to show around July. With the College World Series in Omaha ramping up as the largest showcase of BBCOR bats, manufacturers get their new gear in the hands of the best players for some “free” publicity. By September, they are readily available at most outlets.

Next year’s fastpitch bats are released in June.

It follows, in August, the Little League World Series brings with it more eyeballs on USA Baseball than any other youth sport. Easton has leveraged this opportunity to showcase their next year’s line of youth baseball bats.

Somewhere in that mix, usually with the release of USA, USSSA bats (which outnumber USA bats 2 or 3 to 1) also release to the masses. As fall ball winds down and players outgrow last year’s bat, the fall is an expected time to see inventory prices dump as major retailers make shelf room for incoming 2021 models.

Enter: COVID-19. In terms of bat distributions, it has changed everything.

Many changes, we’ve been told, will be seen for years to come.

Of all the economic clusters where COVID has thrown in a wrench, the distribution model of performance baseball and fastpitch bats is on the shortlist. Vendors are sitting on, literally, tens and tens of thousands of units that at this time last year were sold out.

In June of most years, manufacturers look to unload their last crop of 2020 inventory to big distributors. The Dicks Sporting Goods, Just Bats, and Closeoutbats of the world buy a truckload of a model line or two at significant discounts. Exclusive inventory deals for major distributors go down at rock bottom prices. Those deals are ultimately transferred to us buyers as distributors lure us in for a late-season sale on bats selling for twice that just a few short weeks ago.

So, what happens when baseball and fastpitch cancel?

Most consequences of canceling the season are pretty obvious.

For starters, we can expect vendors and manufacturers to drop their prices hard this fall to move inventory. We don’t have official numbers, but its likely some major retailers have 20 times the inventory than they usually have. We expect prices to reach historic lows. That’s good for us consumers–in the short run at least.

As well, the lack of bat inventory selling will force many manufacturers to hold off on releasing new bats. Where June was the time for fastpitch, July/August for new BBCOR and August/September the time for new USA and USSSA, you can expect those dates to get pushed by several weeks if not several months.

Almost (with the emphasis on almost) every single major bat release has been pushed by months. BBCOR bats that were coming in July are now slated for October at best. Many USSSA and USA bats a shelved for 2021.

As an example, although we aren’t sure, most expected the CAT 9 to drop in May. Instead, we now hope for a late 2020 release. Fastpitch bats should have come and gone already. Now they look to release in mid-August. Some mid-tier manufacturers are pushing until 2021. You name the manufacturer, and you can be sure they have pushed no less than one bat back a month or two or twelve.

Some consequences are not so obvious.

Marucci’s model is an every other year release. This strategy makes sense on a few levels. If a bat manufacturer can release a bat every other year, they can keep their prices higher for longer (they won’t need to push inventory out the door every October to make room for next year’s bats).

Rumor has it, COVID will drive more than a few manufacturers to transition to an every other year release of significant bat lines.

The only “official” 2021 BBCOR bat released to date is a limited edition LTD Select. The 2021 LTD BBCOR bat is, for all intents and purposes, a repaint of the 2020 Select series. It was released so late that Slugger felt it better to call it a 2021 bat, although it came out in late April of 2021.

We expect a couple of 2021 BBCOR bats to release this summer sometime. (That is, sometime before September). But, the vast majority will push to October, and, even then, some won’t see the light of day until 2021.

The lone 2021 BBCOR bat at the moment is the Slugger LTD Select. It is, simply put, the Select bat with the USA themed color up. Why they took the liberty to call it a 2021 bat? We are not sure. But, there isn’t anyone keeping them from calling it a 2025 bat either.

In any event, the bat is an end-loaded two-piece hybrid bat that competes with bats like The Goods from DeMarini and the 13.6 Hybrid from Easton.

Thanks for the info. I’ve been wondering whether I should hold off and wait for the 2021 bats to come in to buy my son a drop 5. This helped me make a decision. Thanks.

You are welcome. Thanks for chiming in.

Its a shame, honestly. My 9 year old who’s a pretty big boy and a decent hitter has outgrown his 2020 -10 and used a -8 cf zen immediately coming off of Covid delays. He broke the -8 Glitch (2020-DeMarini) and there are literally no -8 in either LS orDeMarini’s warehouse. I was graciously sent a voucher to purchase a new bat from them but with zero inventory I’m left holding a $350.00 voucher with no product. I can only pray that the 2021 line comes ASAP!

Any idea if Louisville Slugger will have a new drop 12 for 2021?

Looking at purchasing a 32in/29oz BBCOR for a 15 yr old to last two seasons of club/high school play. Best to hold off at the moment on purchasing a 2021 DeMarini “The Goods” for $400 and wait for a DeMarini Voodoo or bat of similar quality to drop in price? (any other suggested 2020 or 2021 models are fine too).

The Goods is a heavy swinging bat. We think a lot of people are going to make a mistake this year and buy that bat—but it is endloaded. Unless he is a real freak of nature at 15, most of them need a balanced swinging like the Voodoo Balanced or Rawlings Quatro or ADV 360.

In terms of pricing, we are always big fans of buying stuff on discounts. The end of October you can expect Wilson’s Bat Day. And the Holiday’s are always a good time to get a deal or two on something a year older.

ADV’s break and crack. Great pop once broken in but the durability is questionable