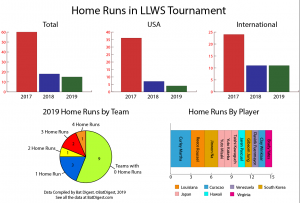 The great irony of making a field and bat standard that allows less home runs is that it over values the kids who can hit home runs. Instead of creating value in small ball, it gives the teams who can hit it out of the park more value than they should. For example, Japan, Caracao and South Korea hit more than 50% of the home runs in this year’s series. Those were the top 3 teams in the international division. On the US side Louisiana, Virginia and Hawaii hit home runs and they were the top 3 in that division. For 2019, two Grand Slams fundamentally changed the nature of the finals. Only Venezuela hit one home run and didn’t make the top 6. Everyone else, a total of 9 other teams, hit a big zero.

The dearth of home runs in the LLWS is an easy horse to beat. It’s terribly obvious to anyone who watches this stuff that the USA bat standard came too far back much like BBCOR did in College. Outfielders in the LLWS this year often had their heels at a generous 150. But, unlike NCAA, they can’t regulate a baseball change to help them fly further and keep the “integrity” of the game. So, are we just stuck now? Raise your hand if you think USA baseball is up for changing the bat standard to something in between where they were and where they are now? Anyone….anyone….Beuller…

And the age change didn’t help deep balls either.

In 2006 Williamsport had the fences in at 205 and moved them out because of too many home runs and a game that didn’t allow for extra base hits (that weren’t home runs). Now, the bat standard made dingers in the big dance a fantasy for 96% of players who make it to Williamsport. If we move the fences back in we take away extra base hits, if we keep it out we remove one of the best parts of the game for Little Leaguers. Isn’t there a happy medium around 210? It’s worth a shot.

In any event, we watched every at bat and tracked a bunch of things. Here’s some of that data in graph form. You can find more that information as we put it here in the entries below.

Updated 8/27/2019 – 3:05PM MST: Armed with all the data we went out to make a couple charts showing the Home Run data we captured during the 2019 Little League World Series. Looks something like this:

Well, what can we say. 15 Home runs hit this year in the series over 32 games. That’s down from the 18 hit last year and the 60 hit in 2017. Here’s some other interesting things to think about:

In any event, here’s the data and commentary we took from watching every Little League world series game in 2019. And, even if the outfielders had their heels on 140 all day, its still one of the best sporting events in the world.

Update 8/27/2019 – 7:00am MST:  Fun trip. One more home run was hit by the Caribbean team, making the total to all of 15. 12 of those were hit by International teams and only three homers in the entire tournament by the US team (two by the same kid).

We went off last year about how the change to USA bats had nothing to do with the “integrity” of the game as was the reason given. What the actual reason was hasn’t ever been made clear. Now, though, hundreds of bats and their accompanying fees are run through the approval process of USA baseball. Maybe its time to rethink the dud standard? Or, at a minimum, move the fences in at Williamsport.

Two from Venezuela and one from Louisiana. That brings our total for the tournament to all of 13. Last year this time there we 16 home runs total with the championship games (international, US and then the final) left to play. Good news, for this year at least, is Japan has hit 3 of the 13 home runs and will likely play two more games. Can it beat last year’s total of 18? We will see it live—-as we’ll be on site for tomorrows games.

Update 8/21/2019 – 7:53pm MST Through 24 games in the 2019 LLWS there have been 10 home runs. Only two hit buy United States players although they’ve played in 12 games. At what point does everyone just realize they need to move the fences back in? 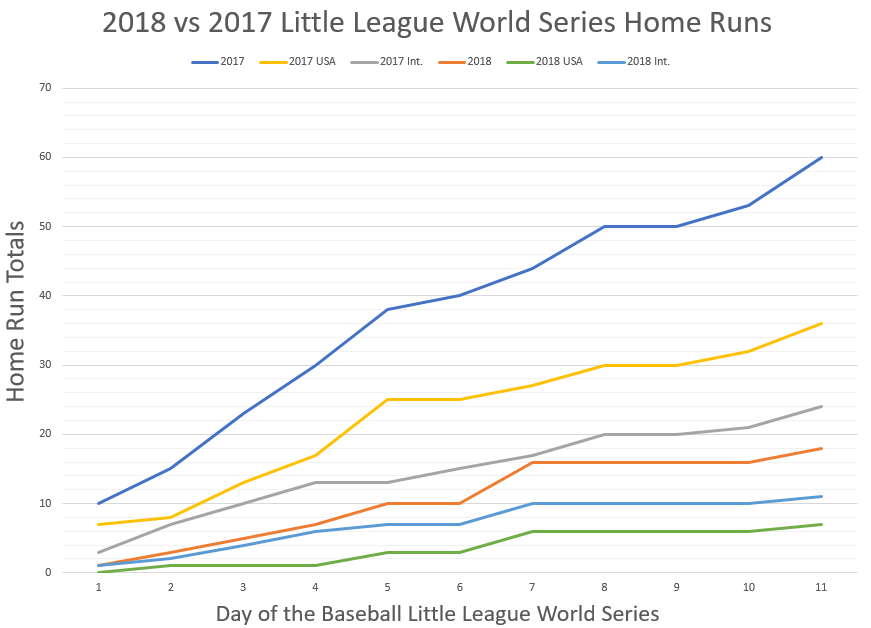 The red/silver one comes in a drop 11.

We’ve also seen a few of the drop 10 or 8 or 5 versions of the bat. (We can’t tell the difference between the bats on screen and would need to see the stamp on the bat better). This yellow one comes in a drop 10, 8 and 5 look like.

Also, we’ve seen the single piece composite version of the ADV called the ADV 1. This is a full composite bat that only comes in a drop 12. Super light swing, small kids tend to be seen using it. Still has the power boost knob and looks like this:

Also, Easton has a single piece aluminum with an extended composite end cap called the Fuze 360. It has the Power Boost knob too. To put it in comparison it is built a lot like the Rawlings VELO or Slugger Solo series. Comes only in a drop 10.

Last but not least, as you will see at the Little League World Series for 2019, is the Easton Alpha 360. This is a single piece aluminum bat built with a traditional end cap (not like the Fuze). Expect a balanced to heavier swing especially in the drop 8 and drop 5. It also comes in a drop 11. It does not have a Power Boost Knob.

Update 8/11/2019 Although it is the 2019 Little League World Series, it also has become the showcase of the new 2020 Easton USA Bats. Easton’s 2020 USA Bats are unveiled at the championship tournament in Williamsport. But, the 8 regional tournaments that seed the Williamsport one are mostly televised and, of note, teams are not given bats by any particular company.

That gives us, thanks to the Worldwide Leader in Sports, a chance to see what bats the best Little League teams in the country are using on their own volition.

The most popular LLWS USA Bat

The 2019 Rawlings Quatro Pro in USA is the most popular bat in the LLWS regionals. The second place is the previous years versions of the bat called the Rawlings Quatro. In a strong third is the Louisville Slugger’s 718 Select.

We put most of our data in a pretty straight forward graphic.

There is plenty to observe from the chart below. Here is what we found interesting:

Notes on the Graphic

Championship Games Only: This is JUST from the championship regional games. Others games within the tournament were televised, but the data only captures the last two teams of each tournament in the final, championship game. Further, the data ONLY captures the first time we saw the full lineup on ESPN. Many of the games were shown at a later start because the previous game ended late.

Roster Changes: If you watch the LLWS you know that roster moves/changes are almost untraceable. Pinch hitters, special runners and lineup changes are plentiful. This is a good thing for the game, but a bad thing when trying to track what ‘starter’ uses what bat. When there are 15 players on the roster that are constantly moving in and out of the 9 person lineup then making a list of the “top 9” is really just making a list of the first 9—not necessarily the starters. That is what we did. This graphic represents the first 9 televised on ESPN of each team.

Bat Changes: We watched many of the non-championship games and tracked bats. Surprisingly, at least to us, many of the players changed bats for their championship games. One particular example is we saw a player hit with a Dirty South Made bat in an elimination game only to see him use the Quatro Pro in the championship. So, sadly we think, DSB is not represented in the graphic although they were represented at the tournament. In homage to their breaking into the big dance, and as a consolation prize for not making the graphic, we give them a backlink here.

Update 8/9/2019 Since we saw it on TV, it appears that Easton has been sending their new 2020 Fuze in USA as either warranty replacements or, somehow or another, kids have access to the bat through a contact. So, we don’t hesitate to show you at least one of the bats we saw on ESPN yesterday.

This is the 2020 Easton Fuze. It comes in a USA version, obviously, that is a drop 10 with a 2 5/8 barrel. In a few ways it is the old Easton Beast. But, its more like the Fuze 360 in BBCOR from 2019. That is, the Power Boost knob should be a huge hit with younger players, the custom stock Lizard Skin grip and the extended composite end cap. It comes in a 28 to 32 inch. When we get the bat in hand we will put up a full review on our USA bat review page.

This is, some might say, the Slugger 619 Solo on steroids. Big barrel, extended composite end cap for a light swing and the ATAC alloy which Easton has used in bats previously.

More to come on Easton as the Williamsport championship games get close.

Update 8/10/2019 This page will serve updated information over the weeks leading up to the 2019 Little League World Series in Williamsport (where we will be attending the championship games). If you want even more up to date information check out our Instagram, Facebook and Twitter feeds. As well, for more specific information on 2020 USA Bats you can see which ones we have already reviewed—or at least began reviewing.

We did something similar with the 2019 College World Series Bats.