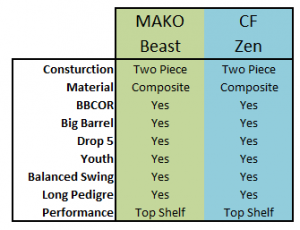 The Beast and Zen bats have much more in common than they do in contrast. For starters, both bats are a light swinging two-piece composite bat. Both bats are built for players looking for the most barrel per swing weight possible. As well, both bats are intended as the top shelf product from their respective companies, and both companies are arguably the leader in the composite and metal bat space. The bats even cost the same amount.

Further, both bat lines have significant amounts of sizing options. They come in a BBCOR drop 5, drop 8, drop 10 and drop 12 big barrel, as well as a drop 11 youth barrel. There are tee-ball versions and junior big barrel versions too.

We discuss at length how to determine which bat has the most pop elsewhere, so we will spare you here, but it is fair to say both bats exhibit industry standard pop along the length of their barrel. In other words, pop is similar. 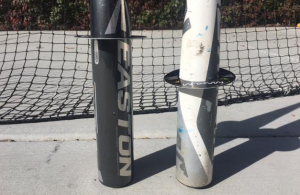 The differences in the Zen and Beast, despite what their respective companies may claim, are small. Highest on the list, the Beast has a longer barrel. Do note, this isn’t proof it has a longer ‘usable’ barrel—meaning it might be physically bigger, but not necessarily that it performs better along the entire length. Of course, Easton claims it does, and we have yet to confirm or deny.

Also different, the Beast has multiple drops in the youth barrel (2 1/4) space. They come in a drop 10, drop 11 and drop 12. The CF Zen only comes in a drop 11. As well, the drop 5 in the Beast is referred to as the MAKO XL Beast—the XL denoting a focus for an end loaded feel. The CF Zen drop 5 still has a focus on a balanced feel, although it weighs the same. If that concept is not clear, read more about an honest bat size chart.

Another difference, although Tic-Tac small, could be the difference in pedigree length. That is, the MAKO line of bats have been at the top of the game since 2012. The CF series, although produced since a CF4, really didn’t find its stride until 2014.

Which Is Better? CF Zen vs Beast? 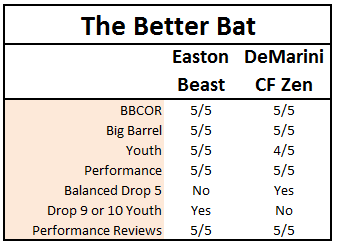 The only place we are confident one bat is better than the other is in the youth barrel space. The MAKO Beast sizing options are one of the reasons. It comes in a drop 9, 10 and 11 while the CF Zen only comes in a drop 11. Player feedback on performance over the years gives the edge to the very long barreled Beast, which is even longer than previous years’ MAKO.

In the senior barrel version Beast vs Zen match-up, early feedback claims both are great performing bats. Our experience with both was similar. Based on forum questions and Facebook traffic alone, the CF Zen in the 2 3/4 might have some early release durability problems. As long as you purchase from a verified dealer and get a receipt this should not cause you a problem. We fully expect DeMarini, with Wilson’s backing, to solve that problem if, indeed, there is one.

Design color is often a factor. Since both bats cost the same and perform roughly the same, deciding on color scheme isn’t as irrelevant as it may seem. For all we know, and soon we will, color design might have a serious impact on confidence and, therefore, hitting ability. 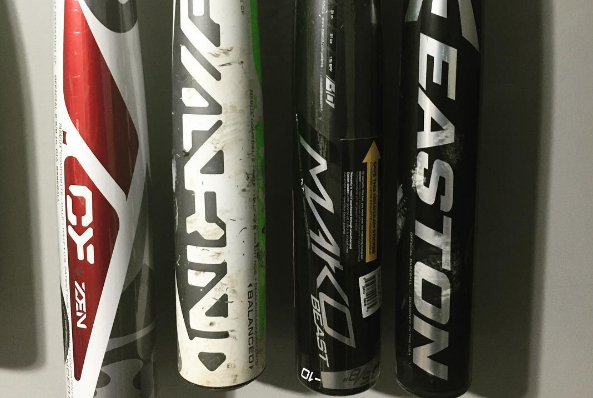