We followed the picks (and highlights) of every 2020 MLB first-round draft pick. We are interested in what bats these players swung in College (or high school). We’ve put here everything we could find on the 1st MLB Bat Picks.

The better a player gets, the less the bat makes the difference. That isn’t to say bats don’t matter to good hitters. They care very much about the bat they use. But, the difference between what a great hitter can do with two different bats is negligible compared to the notable difference a developing player can see between a good and bad bat.

Also worth noting, many colleges have contracts with bat manufacturers. Those contracts often require their player to use a certain bat brand.

For much of his cut-short 2019 season, Torkelson h with a 2019 DeMarini Voodoo Insane. From 2018 to 2019, there weren’t many changes aside from a connection piece that was made a bit stiffer. You can tell between the Insane and Balanced version of the bats by the color. The balanced Insane for 2019 has a white color while the Insane has the black as pictured below.

Watch him drop some absolute bombs with the very last time he’ll be using anything but wood.

Amazon Price Check
2020 Easton Maxum: One of the most underrated BBCOR bats for 2020, we love to see Kjerstad using this stiff and HUUUGE barreled single piece composite from Easton. The Maxum was once a Combat bat. After some bankruptcy restructuring of a parent company, Easton owns all of Combat Bats and resurrected the name and bat style for 2020.

Who is Kjerstand? Kjerstad is an elite lefty power hitter that’s easily a top 10 skill level player. Due to some bizarre structure of the MLB draft via the competitive balance round A (which we won’t geek out on here about), Kjerstand likely went a few picks before he was supposed to. Still, the big hitter chose a stiff bat with a big barrel. At least compared to Torkelson’s two-piece Hybrid, the Easton Maxum feels much more like a wood bat than the Voodoo Insane. The 2020 Easton Maxum is the first time Easton has run with the Maxum name and bat type. If you, or Kjerstad, wanted a previous version, you would need to look at either an old Combat bat or to the JustBats exclusive B2 (which is a repainted version of the old Combat Maxum).

If you want to see a 6’3″ Lefty drop some 400+ rope bombs, then Heston’s the guy you need to watch. Super smooth swing that’s long through the zone. He lifts the ball well, and when he barrels it up, see you. Here are 2020 college highlights of him making the sauce with the 2020 Easton Maxum.

Who is Martin? Martin was the leadoff hitter for 2019 College World Series Champions Vanderbilt. He led the Vandy boys is most hitting and fielding categories. He was on most draft boards as the #2 pick with an outside shot at the top spot. But, with the Oriole’s surprise, Martin dropped into the lap of the Blue Jays.

We found many highlights where Martin was using any number of Voodoos. In the video below, he appears to prefer the Voodoo Insane from 2018 (the grey one). But, in the 2019 CWS, Martin stayed with the 2015 Overlord FT for most at-bats. Below you can see why he’s such a versatile player and, after years of hard work and skill, is now getting paid.

Amazon Price Check
2018 Easton Beast Speed: Considering Nick is a normal-sized person (listed at 5′ 11″, so probably 5′ 9″ in socks) the Easton Beast Speed series is a perfect choice. For 2020, you’d find this bat in the Easton 360 Alpha. It’s a single piece aluminum (which guys with great swings love), has a balanced swing weight, and a good-sized barrel.

Who is Gonzales? Gonzales is a walk-on at New Mexico State who has proven his worth with insane numbers. He hit an outlandish .448/1.115 with a .610 OBP.

The Beast X for 2018 came in a balanced, loaded, and hybrid version. Best we can tell from most of his at-bats, the version Nick swings is the Balanced. The Hybrid has a connection piece in the middle, and both loaded and hybrid have a different paint job than the one we see in his YouTube videos. Funny enough, this type of bat is a single-piece bat that can be found for sub $170 all over the internet. So, if you’re one of those guys who thinks it’s all about the Indian and not the arrow, then you’d be in 1st round territory by picking up a Beast X Speed from 2018.

Amazon Price Check
2014 Easton XL1: Okay. This is a bit of a joke. Hassell, out of high school, uses a wood bat in just about every video we can find him. He appears to use a Louisville Slugger Prime wood. But, Hassell played in the Little League World Series in 2014. When he did so, he used the end-loaded two-piece composite XL1. Mind you, this was pre-USA bat standard, so this was a 2 1/4 barrel on a USSSA bat. It destroyed balls and was the precursor to the orange MAKO—which might be the single most fabulous youth bat of all time.

Who is Hassel? Hassel is a top-end high school prospect out of Independence high school in Tennessee. Drafted as a centerfielder after shining on the 18U National Team, he’s a 6’2″ lefty that shows promise.

As a quick primer on the XL1, it was part of the original Power Brigade from Easton. The Brigade set up into an S and XL series of bats (S standing for balanced and XL for end-loaded). Each series had a 1, 2, and 3. The 1 was a two-piece composite, the two a hybrid, and the three a single piece aluminum. That might sound like overkill (6 model iterations from one company for Little League), but remember that pre-USA bats Easton utterly dominated the Little League 2 1/4 bat game.

The Lousiville Slugger Wood Prime, which Hassel uses in showcase type games, is a top-quality MLB level bat that any bloke can buy if you got about $150. It’s legit wood in maple or ash (not sure which one Hassel swings) made from top quality billets that the pros use too. There isn’t much to say other than Hassel is in good company.

Amazon Price Check
2020 Rawlings VELO ACP: We had to search far and wide, deep in the internets, to find this video fo, Zac Veen, using a Rawlings VELO. Mostly, we were glad to see he was using a non-wood bat for as long as he could. People like to argue that wood and BBCOR bats are the same, but they aren’t. The longer sweet spots and more controlled swing weights of metal or composite bats give them a real advantage (hence the reason the MLB, among other reasons, doesn’t allow it).

Who is Zac Veen? Veen is the 2nd player from high school in the 2020 MLB draft. He is also committed to Florida to play baseball. He plays center field and, you could have guessed, dominated the high school game.

Also, you can find a bunch of Zac Veen videos at showcases where wood bats are required. He appears to have an affinity for Chandler bats. Here are some Chandler and Rawlings Velo highlights from Zac Veen.

Marucci Price Check
Marucci Wood Bats: We could not find a video of Austin using anything but a wood bat, even in what appeared to be some high school games. You got to respect hitters playing high school with wood bats. As far as we could see, it seems he like some turn from Marucci—although likely NOT the AP5 that we picture here.

Who is Austin Hendrick? Hendrick is a left-handed bomber with 91+ exit velocities. He also hit a bomb in a Wrigley Field wood bat tournament when he was a junior. So, note to young players who want to get drafted in the 1st round out of high school: hit a dinger in Wrigley against top-end pitching while dozens of scouts are watching—done, drafted.

Marucci makes some of the best wood bats. Their acquisition of Victus was a game-changer for them too, and now the Marucci umbrella distribution of wood bats is second to none.

2018 Louisville Slugger Omaha: No surprises here. Big hitters at the collegiate level love single piece aluminum bats. And no other single piece aluminum delivers year in and year out quite like the Omaha series from Slugger. Bailey likes the 2018 version of the bat. But, considering it hasn’t changed much over the years, would probably want the ’15 through ’20 version of the bat too.

Amazon Price Check
2019 Louisville Slugger Select: The 719 is for College Level hitters. It has a significant end weight and a stiff connection. The Select to Slugger is what the Voodoo Insane (or The Goods) is to DeMarini. You see more of Justin’s collegiate exploits at the college world series here.

Lest you forget, Ed Howard is of Mount Carmel baseball fame from the Little League World series. His team was the very underrated and underfunded little league group of Illinois that came to the big dance in Williamsport.
He’s now off to the pros.

Amazon Price Check
2019 Rawlings VELO: Ed Howard out of High School is seen in most videos swinging some type of wood bat. We did find this one video on his high school team, where he has the 2019 Rawlings VELO. Nice, stiff feeling single piece aluminum. We think he’d like a more end-loaded bat (the kid is a monster) like a 33″ 2020 Omaha. But, he can rake with the Velo just the same.

We couldn’t find anything other than wood bat prospect/showcase swings from Carson Tucker.

We couldn’t find any videos of Soderstrom hitting in anything else but prospect and showcase type games. We are not sure if he used wood bats at the high school level. 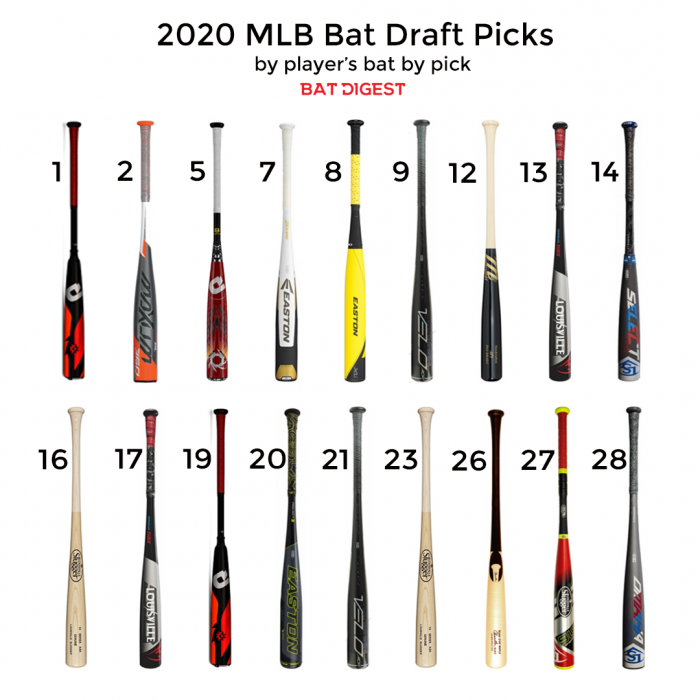