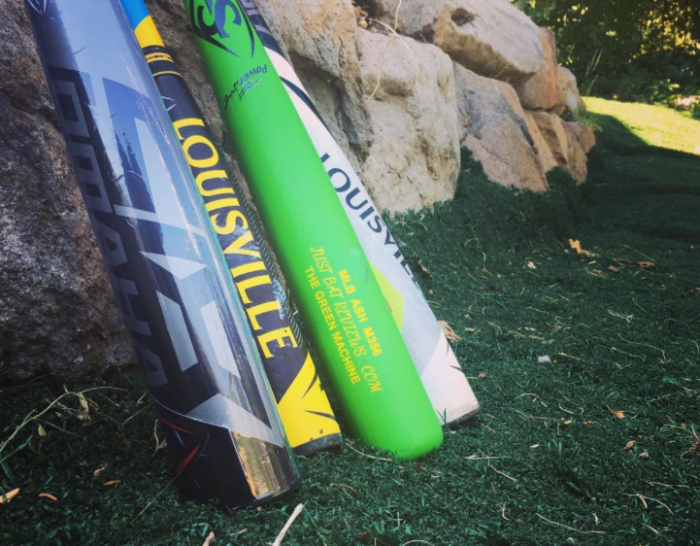 We have hit with every cheap BBCOR bat extensively—even the cheap ones.

Want to know the Best Cheap BBCOR Bat out there?

It depends a bit on what you mean by “cheap,” but we think we have you covered.

The best Cheap BBCOR bat is the best BBCOR bat from year’s past found at a good deal on the secondary market. Bats have a much longer life than most give them credit for. They do not, as sales folks like to imply, lose their pop that fast. Our suggestion to find the best cheap BBCOR bat is to find our older best BBCOR bats lists here and then head off to a secondary market like eBay or Sidelineswap to pick up a used one.

If you want a New Best Cheap BBCOR Bat, then see below.

But, it turns out, there are a lot of options in the cheap BBCOR space.

See what we mean here:

Do you want a new cheap BBCOR Bat?

Your options are slim and not very different from one another. Bats less than $100 in the BBCOR space are all the same single-piece aluminum with nothing remarkable. This doesn’t mean they aren’t good. But, we suggest the one you think looks the best in terms of what you should get. Choose a brand you like—Rawlings, Slugger, Easton, DeMarini are all reasonable—and pull the trigger.

If the timing is right…

Although the used BBCOR bat market can scare many first-time buyers off, we think it a great place to get a quality bat if your budget is less than $100. As we talk about what to buy when looking for a top-end previous year’s BBCOR bat model in October is a great strategy. Finding bats sold for $300 just a few months ago at a sub $100 price point is commonplace.

Here is our favorite eBay search for a used BBCOR bat under $100.

When you accept that strategy of buying a used BBCOR bat for cheap, then the world is your oyster in terms of the best BBCOR bat. If you want some ideas on what to look for, take a look at older (2016, 2017, 2018-sh) models found on our best BBCOR bats page. You need to scroll to the bottom to see them.

There are many things to love about the 519 BBCOR. To our general point, the 518 Omaha is a favorite of many collegiate players who have a near unlimited budget and access to any BBCOR bat on the planet. So, if it cheap, why do they love it so? Generally, three reasons:

If you want to go even less expensive and find a 518 Omaha, go for that one. Nothing has changed on the Omaha in a while, and that is a good thing.

We are fans of the Omaha. Since its resurgence as the 515 in 2015, it is the best selling bat of Louisville Slugger’s performance edition bats. If your budget is sub $200, and you’d like a new BBCOR bat, you should have a hard time passing on the 519 Slugger.

In terms of a new BBCOR bat under $100, your options are very similar. Every sub $100 new BBCOR bat we found comes in a single piece aluminum made from a pretty basic alloy.

When comparing performance, it isn’t easy to discern differences. Simple aluminum alloy bats, regardless of the paint job, feel like simple aluminum bats. The barrel size is similar and feels identical.

The only thing, aside from the colorway, we could manage to differentiate is the grip’s feel. But, considering a top-end Lizard Skin is less than $13 these days, it’s hard to think that seriously.

That said, if we had to decide, we’d choose the Rawlings Prodigy. Our hitters like the perforated grip, and the balance felt right. At less than $90, we thought it as good as any other option out there.

Easton has a few sub $100 aluminum bats on the market. As they get closer to that mark, they upgrade the alloy. This upgrade in alloy tends to deliver a slightly larger barrel as well as more durability.

The S650 stands as the top of the cheap guys. And, like the Rawlings Prodigy above it, it is as good as you’ll find the affordable BBCOR new space.

How Much Should I Spend on a BBCOR Bat?

This is a terribly hard question to answer generally. We are fans of the idea that you should borrow a teammate’s or use last year’s before you put any financial stress on the family. Please eat dinner and pay the mortgage before you sell your kidney to get the latest and greatest. BBCOR bats can indeed be better, but not the difference between a scholarship or paying your own tuition.

If you are patient, plan well, and know what you are looking for, then getting a steal on a BBCOR bat in the secondary market between $50 and $100 is possible.

We get asked all the time how much you should pay for a BBCOR bat. Given our caveat in the paragraph above this one, we suggest you pay no more than the number of games you will play multiplied by $10. So, pay about $10 per game. If you plan to keep the bat for 2 years and play 80 games, then $800 is the max. That number sounds ridiculous because it is, but the point is that playing 80 games justifies as good a bat as is out there. Which, at the time of this writing, was just shy of $500 brand new.

We think the best cheap baseball bat (under $50) is Louisville Slugger’s VAPOR. The BBCOR version of the bat is over $50, so we have some other options below. But the USSSA big barrel feels great, has a good-sized barrel, and some legit performance if you can swing it. Our testers thought it felt as good as some bats twice its price.

In truth, though, we could do some damage with a $50 budget on eBay with a search like this. If you can afford to be patient, then finding a bat for less than $50 that once sold for 5 or 6 times that number just a few months previously is possible. You will likely not have any warranty, but our experience with sub $50 bats makes us hard-pressed to spend real money on new in wrapper $50 bat from a box store. See our tutorial on buying used bats.

In my breef experiance with both of the omaha’s the new and the old, the new omaha tends to have more pop right out of the box. I recently got the new omaha right before a game and i did super well, if your looking for contact bats the louisville omaha series is right for you . Im 13, 5’4 and 120 pounds so im pretty lanky, im playing with 15 to 17 year olds travel ball so getting my bat around is pretty tuff as you can imagine, so i always opt for a lighter bat. i have been using -10 baseball bats, but odd to say they where too light. I just got the omaha -3 and i am rocking the laces off of these balls

Now to the old omaha. the old omaha did well for me in 14u when i was 12 it was very light of course becasue it was a drop 10 at the time. I was still playing travel ball at the age of 12 with 14 year olds so it was pretty scary. Using the drop 10 omaha was very nice although i wish i could give you the review of the old bbcor and the new bbcor side by side “wink, wink” send me a bat. lol.

anyways with that long essay of a review the new 2020 louisville omaha does have more pop in my opinion. After this bat is completely wrecked and dead, i will come back with my overall rating. I will be getting the meta power soon to go along with its little brother omaha so well se how that goes. if you want to check me out on game changer. (The frederick county rec. babe ruth lg. Frederick cannons national.) number #24 Mason D

Fun read Mason, thanks for contributing.

I just recently had a game and i used the new omaha 2020 and i hit the ball well on contact again really nice pop. I LOVE THIS BAT.