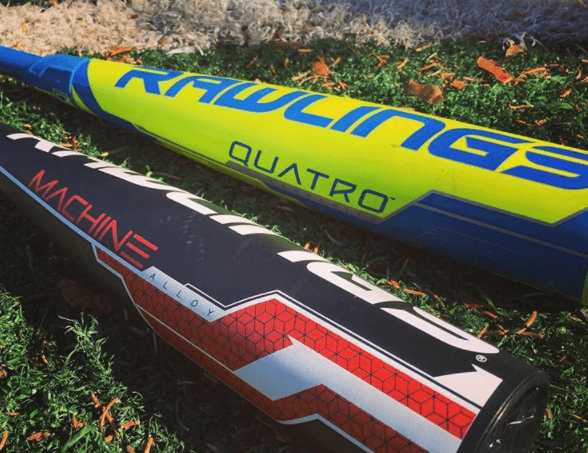 We think the best cheap baseball bat (under $50) is Louisivlle Slugger’s VAPOR. The BBCOR version of the bat is over $50, so we have some other options below. But the USSSA big barrel feels great, has a good sized barrel and some legit performance if you can swing it. Our testers thought it felt as good as some bats twice its price.

In truth, though, we could do some damage with a $50 budget on eBay with a search like this. If you can afford to be patient, then finding a bat for less than $50 that once sold for 5 or 6 times that number just a few months previously is very possible. You will likely not have any warranty, but our experience with sub $50 bats makes us hard pressed to spend real money on new in wrapper $50 bat from a box store. See our tutorial on buying used bats.

See our video comparison between cheap and expensive bats below.

Simply, we’d find a year or two old/used bat on ebay under $50 ending on auction. Sure, we’d lose a warranty and have to wait for it, but you can often pick up great deals on older model used bats. And the upgrade in performance is worth the risk, we think.

Also, if you look in October, or so, you’ll find the supply outweighs demand and you have some negotiating power.

See these two articles for insight on what to buy when and the pitfalls on how to buy a used bat.

Is there any difference between sub $50 Bats?

It is difficult to find any reasonable difference between sub $50 baseball bats. In fact, we couldn’t find one which wasn’t some simple aluminum alloy. The only major difference, in terms of performance, was the grip texture. Some bats had a perforated grip while others a more slick feel. Our experience is we like the perforated grips better as they tend to keep their tack a little longer.

Otherwise, you are buying a paint job and a barrel profile.

For most, it is not a question of being able to afford a more expensive bat. It is a function of simply choosing not to spend your money in that direction.

Our role on this site has always been to find the differences in bats and measure their performance changes. As such, we think there is a considerable difference between a $40 bat and a $400 bat. The feel, usable barrel profile and actual performance are measurable better in a more expensive bat.

We’ve also found that the better a hitter gets, the less useful they find a high performance bat. Great hitters can make just about anything work, and work well.

But, for younger players trying to have success at the plate, we think a good bat means a lot. Even still, it is no substitute for good old fashioned practice.

If we wanted a sub $50 BBCOR bat, and needed it brand new, the S250 from Easton will work as good as any. It swings light, has a decent barrel profile and we like the perforated grip.

The S250 is a traditional one piece aluminum with nothing particularly fancy about its makeup. The industry has been making bats like this for the last several years.

As we state above, if you have the patience and time, it would make sense to buy a used BBCOR bat if $50 was your high water mark. Try a search like this on eBay and you’ll see there are several used BBCOR bats in that range—these are much better than the S250. In fact, at the time of this writing, we found an 2015 Easton MAKO that sold for $46. This bat was listed, and sold, for $449 just a few months ago.

Our hitters liked the bigger barrel and smooth feel on great contact with the Slugger Vapor. It is the only bat on this list we think performs above its price point. We would likely choose this bat over several single piece bats twice its price.

Slugger has as single piece composite bat they refer to as the Catalyst. This bat runs around $100 and keeps tabs on the rising price of the VAPOR which we think could sell just fine at a price point closer to $100.

That said, just like the BBCOR bats, we think some patience and a good eye could go a long way with $50 on eBay with a search like this. At the time of this writing, we found a MAKO Torq in a drop 8 that went for $46. That bat sold for $349 about 2 years ago. It was no where close to worth $349, but is surely worth more than $46.

Find this Bat In Stock

USA Bats doesn’t have the advantage of being around for a long time and, ergo, lacks a real robust secondary market. In fact, we couldn’t find any good used USA bats.

That leaves many of us stuck finding the best cheap USA Bat new in wrapper. We have a running article on that topic. There we chose the Rawlings Prodigy. We think that a great bat, but it has limited distribution as it is only available at Target. The Rawlings Raptor is quite similar and can be found everywhere, including Amazon.

Our hitters liked the fact the Raptor comes in a true drop 10 but still keeps the 2 5/8 barrel size.

As well, we think the VAPOR from slugger another legit sub $50 in the USA space. However, note it does swing heavier as a drop 9.

Although not technically “wood”, we think the best $50 you could spend on a wood-like bat is on a BamBooBat. These bats are great entry level bats that swing well, have fantastic durability.

As well, they are less expensive because Bamboo is a grass, not a wood.

Do note, however, these bats might not be legal in a wood bat league.

Another option in the wood bat space would be to look for high quality blem bats. These blems are almost always a cosmetic, not functional, issue. See our article on finding blem bats.