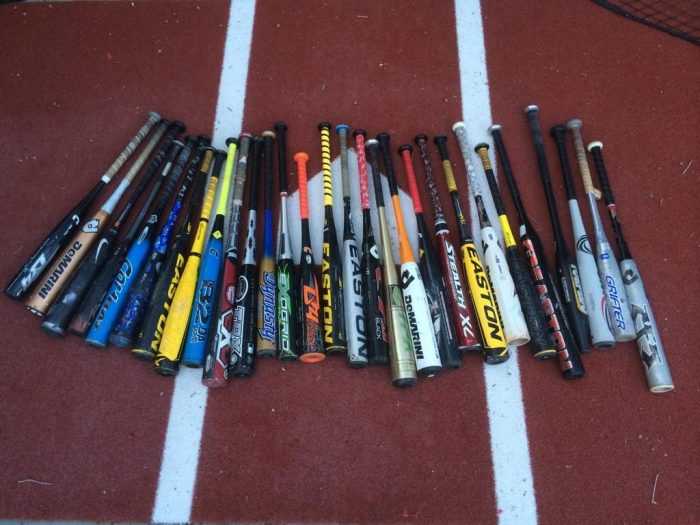 In conjunction with our best cheap baseball bat article, we put together one with a $100 top end threshold too. (The ‘cheap’ article uses a $50 limit). $100 doubles our money but does not double our bat’s ability. After much testing, we think the best NEW baseball bat for under $100 is Axe’s Senior League drop 10 Origin.

However, with a $100 budget we would struggle to pass up some of the deals a keen eye can find on eBay or on closeouts from major vendors.

During the months with lower bat demand (like October) $100 can go a long way on eBay to getting almost any older bat you want. Granted, the bat likely has no warranty and will take a while to get to you. But, if you have the luxury of being patient, check out our guide to buying used bats and our what to buy when article.

Search eBay with this search string to find sub $100 bat deals. See our best baseball bats page to find some models to look out for.

Also, a lot of really good bats often get pushed out by major sellers at sub $100 price points. That is, they were once going for $150+ and, for a limited time only, are going for $99.

Those deals are nearly impossible to keep track of because they often change daily. But, try these links to see some of them:

It is odd, for us, to choose a wood bat for the best under $100 bat. But, honestly, if we had to choose a NEW bat under $100 in the BBCOR space we’d go with the Brett Bros Maple wood bat. This thing gets outstanding user ratings, and is a true high quality wood barrel and a composite-type, very durable handle.

The company is owned, and named after, the Brett brothers of George Brett fame.

It also helps that there just aren’t any intriguing options UNDER $100 in the BBCOR space. You can find several of last year’s models under $100 via markdown. Those are often tempting. But, in terms of an original price point under $100, in the new bat category, you won’t spend your money any more wisely then on the MM-110 from Brett Bros.

Five years ago, when Axe really started to come on the scene, most were very skeptical. Today, only some are skeptical. Others, not so much. The fact a number of MLB players use the ergonomically shaped handle is a testament to the feel.

If we had $100 and wanted to get a NEW Big Barrel bat we’d buy the 2018 Axe Origin. It is a single piece aluminum and swings like one. That is, a stiff feel with great power transfer to the ball but very little forgiveness on mishits—just like long ball hitters like it.

As we state above, at $100 we would also try our luck on a used bat via eBay. Finding last year’s model or a bat whose original buyer misjudged the size can make $100 go a long way in the USSSA Big Barrel space. In fact, at the time of this writing, we found a 2016 Easton MAKO go for $81. That bat sold for 4 times that price just a few short months ago.

You should also check our best big barrel bats article.

The USA Bat market is volatile. There are very few options on the secondary market and bat companies are often scrambling trying to get inventory levels where they need to be. As well, there aren’t very many $99 USA bats available. There is a swath between the $39 and $79 range, the another grouping starting around $149+.

With the exception of the USA bat space, $100 bats are plentiful. Even during the season, when few bat deals go down, you can find a number of in wrapper bats new from factory by certified vendors. These bats are often not considered high performance or top shelf as they lack the barrel size and max performance factors along the length of the bat. However, plenty of players do just fine with these bats. They also serve well as backups.

With $100 dollars in your pocket, you can make some wise decisions in terms of the best bat to buy. If you have the time, check the used market. If you need something now, with a warranty and new in wrapper, then the above are our best bets.

Just bought a 2018 USA Voodoo for $104 at Baseballmonkey. You can hardly find used voodoo one’s for that price.