Some believe that a more elastic barrel wall can produce faster exit speeds. In no small measure, according to every manufacturer and bat engineer we spoke to, the belief is not valid. We discussed the topic with every major manufacturer and compiled their sentiment, as we understood it, below.

Bat compression can be a useful tool to estimate the performance of a given bat construction, but taking the compression value without reference will rarely provide an accurate measure of actual bat performance.

Measuring only how loose the springs are in your trampoline tells you virtually nothing about how high you can jump.

We asked several industry experts from a major manufacturer to comment on the usefulness of bat compression. Read below what they had to say about bat compression tests predictive power of ball exit speeds.

Here is a sampling of compression tests we took on bats at Bat Digest. As we say in this article, making full-on determinations about ball exit speeds based on these numbers doesn’t mean very much. You can see this list on our ball exit speed spreadsheet too.

One useful way to visualize how easier compression is not always better is to consider the trampoline in your backyard.

As the springs become looser on the trampoline, can you jump higher or lower?

The answer, of course, depends. Specifically, how much does the person jumping weigh? And, how much elasticity is retained in the springs as they become loose? We could imagine an equation that optimizes the trampoline’s effectiveness. That equation, based on factors like the jumper’s weight and leg strength, as well as the quality of the spring’s recoil, would set the optimal amount of taut in the tramp’s springs.

Much like the perfectly dialed in trampoline, a bat’s effectiveness is not always maximized by merely making the barrel walls more flexible. Or, as we might say, loosening the springs of the bat. Instead, the right elasticity in the barrel simply depends. Factors like pitch speed, bat and ball weight as well as the quality of the barrel’s material all play significant factors in the optimal compression. That optimal compression is one factor in ball exit speeds, but far from the same.

Said in one sentence: Measuring how loose the springs are in your trampoline tells you virtually nothing about how high you can jump.

Measuring the Life of a Single Bat

One general theme we gathered from the experts was that bat compression test results are useful in monitoring the life of a bat. As a composite bat is worked in more, its compression will become easier.

We also had a good back and forth with some engineers at DeMarini who felt, without putting words in their mouth, much like everyone else we spoke to. They add how bat compression is done at a field level (with devices like the one you see in the video above) aren’t reliable. Most bats in a particular classification sit real close to each other on a compression test scale. Small changes from one bat to another are not predictive enough, nor is the device accurate enough to make determinations about ball exit speeds.

Compression doesn’t matter to me; I’m hitting bombs either way. Hitters should focus less on barrel compression and more on swing mechanics, timing, and approach at the plate. Blaming your bat for a bad AB is counter-productive.

Here are some notes we took from our conversation. We paraphrased, as far as we understood it.

A well respected Easton engineer had similar things to say. Simply, the difference between compression and exit speeds are uncorrelated enough to put little stock into compression tests alone.

Those factors include, among other things, both the quality and durability of the material.

Rawlings said, without surprise at this point, very similar things. Compression made more sense as a stand-alone performance test a long time ago. Now, construction is “non-linear.” Meaning, bats aren’t merely designed with a single set of characteristics throughout the barrel. As such, measuring pressures at a point of the bat and calling it a performance comparison is not accurate.

When do Compression Numbers Matter? 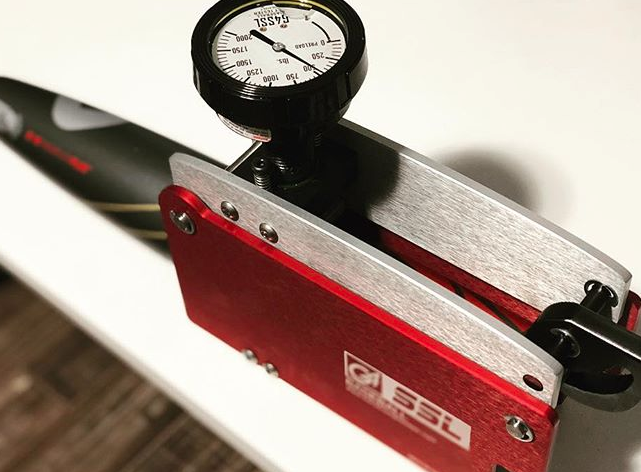 I have purchase
Louisville Meta 33/30
Louisville 2012 33/30
For my son who is fourteen.
He hit the ball 300.
After getting them both rolled to lower the compression, he is hitting 320-330.
He is 6’1” and 165. I would say he’s getting stronger as a factor, however this was tested within three days of each session. Lowering compression works.

Lower compression bats are hotter all around . For instance Easton ghost fastpitch at 1050 compression vs a demarini CF 1400 compression . The ghost blows its doors off once lowering compression on CF it got closer and similar ball distance.

Hey Nate, Thanks for the comment. Compression and exit speeds might be more predictable in the fast-pitch space. As you point out, the Ghost and the CF have a lot of similarities. More recent nonlinear composite designs, especially in the baseball space, aren’t as predictable as measuring compression and then predicting exit speeds. We’ve tested different compressions on our ball cannon and found that compression isn’t a linear explanation to exit velocities. The Rawlings Quatro from 2018 is a good example. Very compressible compared to other BBCOR bats (and even got an exemption from BBCOR) and, while good exit speeds, not the best by any means. It will be interesting to watch how nonlinear designs affect people’s dependence on compression in the coming years. In any event, thanks for speaking up.

how are all these bats swung to obtain the exit speds? By robots or human swinging?

How do we get a full list of USA bat compression results?