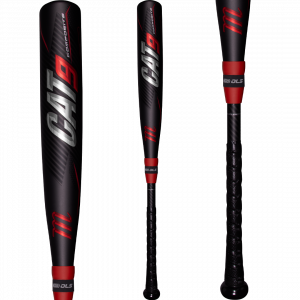 Marucci is releasing a new bat for 2021 called the Marucci CAT 9 Composite. This is a two-piece composite bat found in USSSA, USA, and BBCOR. The bat will compete directly in a very competitive two-piece market against bats like the META, CF, ADV 360, and Quatro Pro. The bat has a balanced swing, huge barrel and, according to some our hitters, hits absolute rockets.

The CAT Composite is for no joke baseball players. That means, if you play a lot of games, see high pitch speed, and are willing to spend the money it takes to get top end gear, then the CAT 8 could be on your short list.

Marucci Amazon eBay JustBats
The Drop 10 Marucci CAT Composite for 2021 is a fantastic bat. The only thing it is missing is a 32 and 27-inch version. Other than that, it gives DeMarini's CF for its money. If the bat can hold up to its durability claims, it might surpass the CF as the best drop 10 on the market. As always, we wish it was cheaper, but it isn't an unheard of price. This is an easy win for us, and, again, if it can be durable, the bat will be one of our favorite USSSA drop 10's on the market---maybe even our most favorite.
Sizing: 28, 29, 30, 31-inch
Release Date: October 1, 2020
Serial: MSBCCP910
Bat Type: Two Piece Composite
Barrel Size: 2 3/4
Similar Drop 10/11 USSSA Bats

Marucci Amazon eBay JustBats
The Drop 8 Marucci CAT Composite for 2021 is everything we've ever wanted in a two-piece composite bat (aside from the price point). It swings light, has remarkable performance, feels perfect, and has a massive barrel. If any bat has put DeMarini's CF on notice that it's time to get better, this is it. We haven't had the bat long enough to know how its durability stacks up, but if it's anything better than the CF (and that shouldn't be hard), then we think the CAT 9 Composite is the best drop 8 USSSA on the market today.
Sizing: 28, 29, 30, 31, 32-inch
Release Date: October 1, 2020
Serial: MSBCCP98
Bat Type: Two Piece Composite
Barrel Size: 2 3/4
Similar Drop 8 USSSA Bats 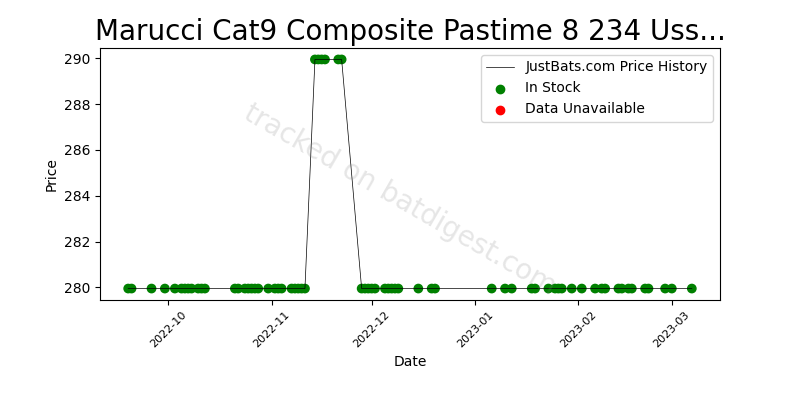 Marucci Amazon eBay JustBats
Well, we dare say they've done it. The 2021 Marucci CAT 9 Composite in a drop 5 is the first bat we've swung in a while that puts the DeMarini CF on notice. Maybe not as good as the CF in feel (hence the 9.4 score instead of a perfect 10), but oh so close. If you're looking for a different take on a drop 5 that isn't called the CF, then we think the Marucci CAT 9 Composite will do you justice. Light swing, huge barrel, fantastic feel, and exit speeds that rival the best in the business. Our hitters liked the drop 5 more than any other drop 5.
Sizing: 30, 31, 32-inch
Release Date: October 1, 2020
Serial: MSBCCP95
Bat Type: Two Piece Composite
Barrel Size: 2 3/4
Similar Drop 5 USSSA Bats

The idea of a two-piece composite bat with a HUGE barrel is common in the USSSA space. Companies like DeMarini and the CF Zen, Easton and their Ghost X (Mako), Rawlings and their Quatro have been living there, and thriving there, for quite a while.

The CAT Composite reminds us most of a nearly unheard of bat in the Mizuno Ghost in terms of barrel size. However, as of 2018, the Mizuno Ghost was only a USA Bat. Marucci has yet to get into the USA space.

If we compare construction and drop sizes, then bats like Easton’s Ghost X and DeMarini’s CF Zen fit a close competitor to the CAT Composite.

There isn’t a real last year’s version of the Marucci CAT Composite. But, for sure, Marucci took what they learned from the Marucci Hex Connect and made it into a better version. Though, Serious upgrades go into the CAT connect, including the connect (SCX) connection used in the Cat 8 BBCOR Connect.

Marucci’s CAT Connect is a two-piece composite bat built with a HUUUGE barrel and nice connection piece. The connection piece, which helps absorb mishit balls’ sting, is the same one used on the high-end BBCOR CAT 8 Connect.