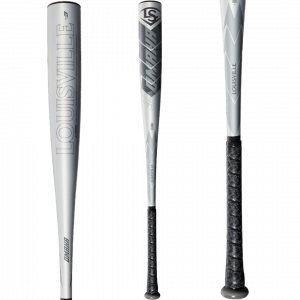 The 2021 Louisville Slugger Omaha is a single-piece aluminum bat in BBCOR and USSSA. The 33 and 34-inch BBCOR are in the endloaded category, while the rest, including those in the USSSA, are more balanced. For 2021, Slugger decided not to sell this bat wholesale. So, you can only find it directly on their website. The 2021 Omaha is true to its roots but does come with real upgrades from 2020. The handle’s aluminum is reenginneered to help bring down sting. While hitting, we did not notice any differences.


Our bigger, stronger hitters like single-piece aluminum bats. So do some of the younger, entry-level players who don’t see high pitch speeds in rec ball. The attractive price point is a good place to start for most parents just willing to dip their toes in the world of performance bats.

Aside from the 33 and 34-inch BBCOR, the 2021 Omaha is made for the hitter who likes a stiff feel, needs tons of bat speed, and likes a big barrelled single-piece aluminum bat. It is also built for the parent who likes a more reasonably priced bat that can perform at the top of the BBCOR or USSSA limit. The 33 and 34-inch BBCOR are heavy swings built for the elite hitter who wants a stiff feel and all the barrel he can handle.

Slugger Amazon eBay JustBats
The 33 and 34-inch BBCOR versions of the Slugger Omaha are considered end-loaded. The 29 through 32 inches are balanced. This dynamic swing weight serves those who need a 33/34 better. Overall, the 2021 BBCOR Omaha is a single-piece bat with a big barrel and decent feel. Our exit speeds show the bat performs as well as any on the market. The 2021 model only has distribution on Slugger's site directly, and that lack of awareness pushes down its relevance and demand. To make matters worse, they raised the starting price by $50 over the 2020. Its 29 through 34-inch lengths, though, do make it an option for every player that can find it.
Sizing: 29, 30, 31, 32, 33, 34-inch
Release Date: September 15, 2020
Serial: WTLBBO521B3
Bat Type: Single Piece Alloy
Barrel Size: 2 5/8
See other BBCOR Bats

There are a lot of single-piece alloy bats with balanced swings and big barrels. The CAT 9 from Marucci is the most popular. But you also have bats like the Rawlings VELO and 5150, Eaton’s Fuze and Alpha, DeMarini’s Voodoo One, and The Goods One Piece. Slugger has another line called the Solo that is simliar. This is all to say nothing of the hoards of other smaller bat companies which have come out with single-piece aluminum bat too.

The changes from 2020 to 2021 are as big as the Omaha has ever experienced. First, the bat uses a new alloy in the handle to help reduce hand sting. We did not notice any differences but can believe the claim to some extent. Second, the bat is no longer offered at major outlets. Instead, Slugger has kept the distribution all in house and the only way to buy the bat (at least in the beginning months) is through its online store.

That second change is bigger than most consumers might imagine. The pressure on bat distribution channels to find sustainable margins has been very real the last several years. Covid has only multiplied that problem.

As bat companies have consolidated, Amazon has grown in the bat space, and manufacturers have gone more to direct sales, the manner in which direction the money flows has changed companies and lives. Retaining one of their most popular bat lines ever in the 2021 Omaha to in house sales only cuts out major retailers and creates a want of independent information on these bats.

Our estimation is that Wilson, the parent company of Louisville Slugger, is taking a considerable risk by cutting out their major distribution channels on one of the most popular bats of all time. Maybe, though, this is just an effect that COVID had on distribution and things will change come 2022? We will see.

The 2021 Louisville Slugger Omaha is a single piece aluminum bat with a big barrel and balanced swing weight. The 33 and 34-inch BBCOR bats have a swing weight and balance point that is more endloaded than the 29 through 32-inch versions. The USSSA version swings balanced compared to the rest of those in its class.