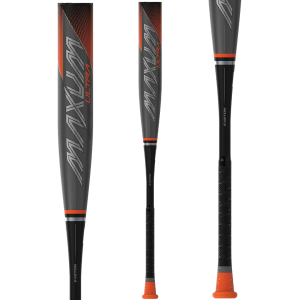 We got exit speeds and swing weights in preparation for our 2021 Easton Maxum Ultra review. In short, it’s a huge barrel with a lighter swing and our favorite feeling single piece bat on the market. Easton improved on the 2021 by adding a bit more mass in the barrel than the 2020.


Our hitters liked a lot of things about the Maxum. In fact, many mentioned it was their favorite bat of the year so far. They like the big barrel, light swing, wood-like sound and performance. Middle power guys really liked it. Some outlets are claiming the bat is endloaded even though Easton is calling it balanced. We measured the actual swing weight on the 33-inch BBCOR and found it to be exactly what Easton claims it is: a balanced bat. It is heavier than last year’s BBCOR, but still under the average of BBCOR bats for that class.

As a lighter swinging but single piece BBCOR bat, the Easton Maxum Ultra, like the Maxums before it, is built for the good hitter who wants more power but isn’t necessarily a power hitter. The light swing gets you on time even with a longer length bat, the composite single piece doesn’t feel as flexible as man two-piece bats but is still kinder on the hands than most alloy single pieces, and the big barrel gives lots of chances for max exit velo.

Amazon eBay JustBats
The 2021 Easton Maxum Ultra is a single-piece composite BBCOR bat. We measured the swing weight and found it to swing heavier than last year's model (as Easton claims) but still under the average of its length class. That is, the 33-inch 2021 Easton Maxum Ultra swings light, but not ultra light. This consistently performs high on our exit speed tests, feels great, and, although a single piece, has some give in the composite to help with feel. It is one of our favorite BBCOR bats for 2021.
Sizing: 31, 32, 33, 34-inch
Release Date: September 1, 2020
Serial: BB21MX
Bat Type: Single Piece Composite
Barrel Size: 2 5/8
Similar BBCOR Bats

Dirty South Bats makes a single piece composite called the KAMO. It is a BBCOR bat but swings very heavy compared to the Maxum Ultra. But, in terms of flexibility, the two bats are very similar. Otherwise, you can’t find a similarly constructed bat when looking for Maxum Ultra counterparts.

We think the bat feels more like a balanced two-piece composite than it does a single piece alloy. The composite construction appears to give it some flex on hits and mishits so it doesn’t ring the hands as much as something like a wood bat or stiff Louisville Slugger Omaha.

Everything is the same with a small increase in swing weight. The 2020 Maxum swung the lightest of the entire BBCOR class. Easton added some weight back in the barrel to give it a little more power and we think it was a great move. Based on our swing weight measurements, the bat still swings lighter than the average BBCOR bat in its given weight class but it’s definitely heavier than the 2020 model.

The 2021 Easton Maxum Ultra has one of the largest BBCOR barrel profiles in the 2021 class. It is a single piece of composite built with a massive barrel and a middle of road/slightly light swing weight. Here are the bullet points.