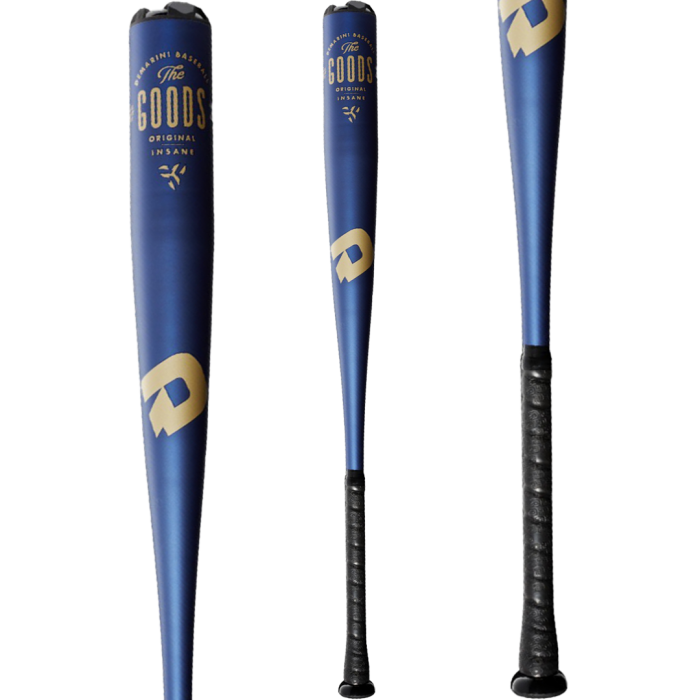 2021 DeMarini The Goods One Piece

2021 DeMarini The Goods One Piece

In both USSSA and BBCOR, our hitters liked the bat’s design, its stiffness, and the ball flight when they drilled one on the screws. In BBCOR, it swings on the light side of balanced but even folks who liked balanced+ type swing wights were fine with how it felt. It was light, but not unusa… Jump to the full review.

In both USSSA and BBCOR, our hitters liked the bat’s design, its stiffness, and the ball flight when they drilled one on the screws. In BBCOR, it swings on the light side of balanced but even folks who liked balanced+ type swing wights were fine with how it felt. It was light, but not unusably light. The 33-inch, which we measured, is 3% below the average BBCOR swing weight in that length.

Most high school hitters prefer composite or hybrid bats that better feel on mishits. For USSSA, we liked the drop 8 better than the drop 10—that added weight did a to reduce hand sting.

Hitters who like a stiff one-piece alloy bat preferred The Goods One Piece. Usually, hitters who prefer those types of bats are stronger, elite type hitters that don’t have as much trouble squaring up the ball as they do getting enough power behind it. Those types also want heavier swinging bats which The Goods One Piece is not. This bat accents smaller hitters that like stiff feeling bats with focused barrels.

BBCOR The Goods One Piece Recommendations

The BBCOR The Goods One Piece is built for a big hitter who likes lots of stiffness in their bat. As well, the alloy is hot out of the wrapper, so there’s no need to wait or wonder if your bat has yet to be worked in. It will be no better than the first time you hit it. Those looking for a balanced swing, single-piece alloy bat with a great look, flared knob, and ping sound will like the 2021 The Goods One Piece. Since there are virtually no changes from the 2020 version of the bat aside from the paint job, a 2020 will do you just as good if you’re looking to save a couple of bucks.

USSSA The Goods One Piece Recommendations

New for 2021, DeMarini has a USSSA The Goods One Piece. This bat replaces the Voodoo One from years past. The bat uses a new graphics scheme and a new end cap and the addition of the drop 8. We liked the drop 8 over the drop 10 but wouldn’t buy the heavier bat if you can’t swing it. When hit well, the ball looked great off the bat. The bat has a loud ping, looks, and feels a lot like the Voodoo One from 2020 and, we think, will really shine for that single-piece drop 8 hitters in the USSSA space. It is also a balanced swinging bat.

Compared to the 2020 The Goods One Piece, there are no changes in the bat’s BBCOR versions. The USSSA 2021 The Goods One Piece is a new model line. However, that USSSA bat is a color up, and marketing reshapes from the Voodoo One with a new end cap and new drop 8. All reasonable ‘upgrades’ from year to year. Rarely is there anything as revolutionary as it might first seem. That’s not a knock. It just is what it is in the bat space.

The Goods One Piece

The 2020 DeMarini The Goods One Piece is the next generation of the Voodoo One. For 2020, DeMarini is also producing the old Voodoo. The difference between the two is a new end cap and paint job. Performance-wise, the bat is still a single-piece aluminum alloy with a balanced swing, ping sound, and durable frame.

We have hit with every DeMarini Voodoo bat since 2015. Cage and game hitting as well as exit speeds and direct player feedback compromise this 2020 DeMarini Voodoo Review. The bat is considered a light swinging, entry level performance baseball bat in the single piece aluminum space. The Voodoo One, not to be confused with the hybrid Voodoo Balanced, comes in BBCOR, USA and USSSA. Players looking for a value deal or big and strong players that want a very light swing in an ultra stiff bat will like the 2020 DeMarini Voodoo One. The USA bat is a real bright spot, the BBCOR version is average and the USSSA bat is avoidable.

We have now spent considerable time both in the cage and during games with the 2018 DeMarini Voodoo One balanced. It is a light swinging version of the older Voodoo Insane and does really well against a bat like the Rawlings VELO.

There are plenty of single piece alloy bats on the market in the BBCOR and USSSA space. The most popular might be Slugger’s Omaha or Solo. You can also look close at Easton’s Alpha lines, Axe Elite One lines, Marucci’s CAT line, Victus’ Vandals and any number of one off single piece bat manufacturer. It is, to say the least, very difficult to differentiate between other single piece aluminum bats.

2020 Louisville Slugger Omaha Review: Value. Value. Value. After hitting with every version of the 2020 Slugger Omaha, we are confident it will continue to dominate the value purchase realm of all baseball. It serves as a legit option for novice and expert alike in the BBCOR, USSSA and USA space with a reasonable price point most parents are willing to pay. Our favorite, if we had to choose, is the drop 5 USA Omaha. With the exception of the 33 and 34-inch BBCOR, 2020 Omahas are built with a light swing in mind. Those two BBCOR versions are intentionally built for a heavy swing. Our Score 9.8/10 (BBCOR); 9.5/10(USSSA); 9.8/10 (USA).

Easton starts their 2019 BBCOR bat offering with the new Alpha.

See the B5 Review

The Goods vs The Goods One Piece

Both the Goods and the Goods One piece use the X14 barrel. This means, in theory at least, the bat’s performance is the same between the two.

The performance difference is in the swing weight. The Goods One Piece is on the lighter side of balanced while The Goods is considered an almost end-loaded bat.

The other difference, and it’s a major one, is The Goods is a hybrid bat. Meaning, it uses a composite handle and then a connection piece to join the handle and X14 barrel, while The Goods One Piece is only a single piece of aluminum. This gives The Goods a nicer feel on mishits.

Despite what the industry generally tries and portrays, stiffer bats do not hit the ball farther than non-stiffer bats. At least, to a certain extent. A very flexible bat would have issues. The vast majority of two-piece bats like The Goods eject the ball from its barrel before the connection piece is even engaged.

We admit that the concept isn’t entirely intuitive. But, research papers and physical evidence working with hitting robots have confirmed it is true. The ball leaves the barrel before any stiffness comes into play. The barrel serves as a trampoline, not the starting point for any centrifugal force ejection while the bat whips through the zone.

2021 The Goods One Piece Construction

The 2021 DeMarini The Goods One Piece is a single-piece bat (hence One Piece) with full aluminum construction. It uses an X14 alloy, which DeMarini has put in their top-end alloy barrels of all makes (including The Goods and The Voodoo) for several years now. The bat’s BBCOR versions have a slightly flared knob and should be considered a balanced bat. The USSSA versions are more balanced and do not have a flared knob.